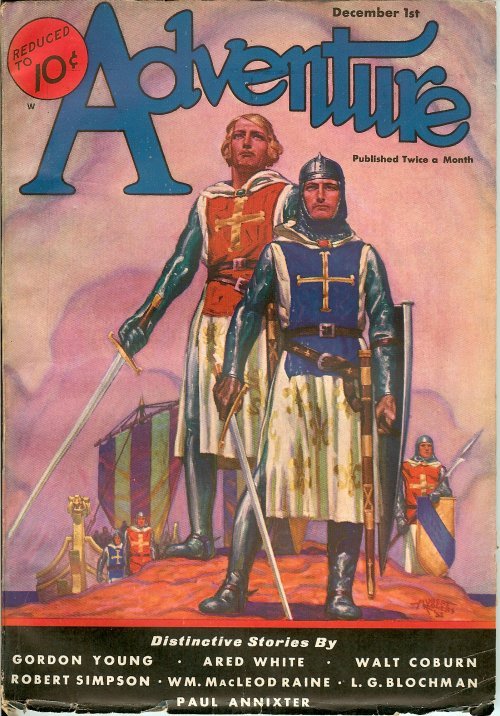 This issue of Adventure magazine, a 10-cent pulp from December 1932, features an eye-catching cover. It depicts a troop of knights reaching the shores after some sort of journey across the sea. Are they returning from the crusades? Seeking a buried treasure? Are they invading enemy lands? Perhaps they’ve  finally made it to land after being lost at sea. This scene offers endless possibilities!

From an artistic standpoint, it speaks volumes. The blue logo nicely samples color from the primary knight’s overshirt and chainmail.  Additionally, the blue pops on the shield in the rear and the dabs of ocean in the background.

Beyond the color, consider the stoic poses of these knights. Absolutely perfect to attract buyers! It’s easy to imagine kids tearing off that cover and hanging it on their wall.

While this is a great cover, it doesn’t appear to illustrate any of the stories inside this issue of Adventure magazine.

Inside this issue of Adventure magazine

You can read this issue free online at the Adventure Magazine archive found in the Internet Archive.

Ared White leads off this issue with a story on Page 2. White writes the military story called  “By Command Of.” It’s about a man nicknamed Hell’s Bells, and he can’t seem to muster much confidence from his troops.

According to the SF Encyclopedia, Author Ared White is better known as Major General George A. White, a top officer in the Oregon National Guard. To kick-start his distinguished military career, White served as a volunteer in the Spanish-American War in 1898. He followed that with service on the Mexican border and then organized the training of troops to serve in World War I. Toward the end of WWI, White deployed to France.

White was also one of the original organizers of the American Legion in 1919. In World War II, Oregon’s Camp White was named after him.

Beyond his time as a soldier, White wrote. His writing career took off in the 1930s, and “By Command Of” is a prime example of his military-themed work. He followed that with a few other works here and there. The standout includes a book, “Attack on America,” exploring the invasion of the United States through Mexico, which sound an awful lot like “Red Dawn” and other invasion paranoia stories.