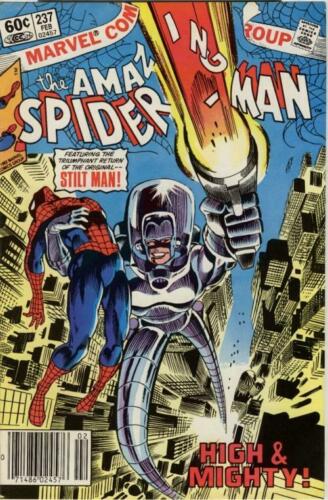 When CotB started reading comics, Marvel Comics were the comics to read. We’re talking the early 1980s, and it was sometime then that we picked up a copy of Amazing Spider-Man that featured a new-to-us villain — Stilt-Man!

In that issue, poor Stilt-Man is desperate to get his mojo back, and he takes on Spider-Man. For a while at least, he holds his own, but things fall apart pretty quickly.

That’s pretty much always the story for poor Stilt-Man: He’s towering with pride over his fancy suit of high-rise armor. Then he gets his stride going, and fate or ineptitude trips him up, triggering total disaster. And for Stilt-Man it isn’t just a temporary stumble, it’s almost always an embarrassing plummet from high-orbit.

Again and again, that’s the story. And we’re OK with that. In fact, if that is the inevitable arc of a Stilt-Man story, we’re more than happy to follow along with that formula.

Why Stilt-Man is great

Stilt-Man started his career in the early issues of Daredevil. From there, he’s fought numerous other heroes over the years: Spider-Man, Ms. Marvel, Captain America, Thor and the Punisher.

For the most part, the Stilt-Man suit has been worn by Wilbur Day, but at least two other men have worn his Stilt-Armor. Then we also had the truly amazing addition to the Stilt-Man legacy — In the pages of the Deadpool comic, there is also Lady Stilt-Man! How awesome is that! She certainly took the concept to new heights!

But what makes him so entertaining? What allows us to keep enjoying his fated path? He’s sort of the Charlie Brown of the Marvel Universe Doomed to failure, yet he’s always trying.

(Quick aside: DC has its own Charlie Brown, too!).

It also doesn’t hurt that for a super-villain, Stilt-Man has totally ridiculous powers: Long legs. Even attempts to boost his powers — with a gun, with enhanced strength, with adamantium, with more sophisticated armor, with extendable arms — end in failure. It’s clear that Wilbur Day is a smart guy, a regular-Joe version of Tony Stark, but he just isn’t applying himself. Well, he is. He just isn’t applying his talents to useful inventions.

Wilbur Day across the multiverse

And you might think that it’s easy to assume that Wilbur is easy to forget. That he’s hardly important. Well, in the big scheme of things, he really is hardly in comics, but he’s not someone that’s totally obscure.

He’s been on cartoons, in video games, in table-top games, in role-playing games and in the last year or so, he became a super-sized action figure.

Who would have thought that Stilt-Man would get so big? 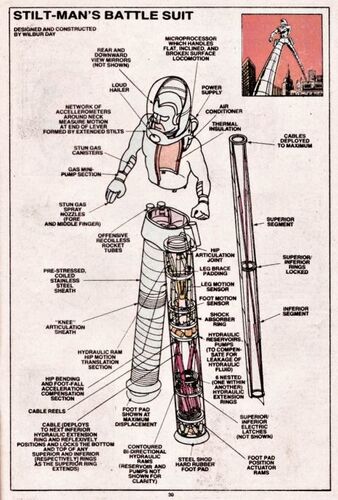