The newest Public Domain redesign challenge has turned its eye on a character named Magno. Chances are you haven’t heard of Magno because he wasn’t a character created by any of the big  Golden Age comic book companies.

No, National Periodical Publications (later DC Comics). Not for Timely (later Marvel Comics). Not for Charlton or MLJ. Instead, Magno was created for use in Ace Magazines, and appeared in multiple volumes of Super-Mystery Comics. 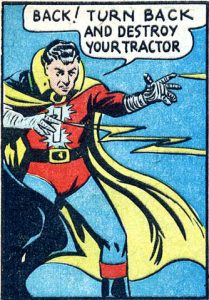 So who is Magno? In the original series, he was a caped superhero who was invulnerable and had the power of magnetism, which allowed him to repel and attract metal objects. His most sinister foe was the Clown, but he also squared off against the Black Puma and Cobra.

Since he was active in the 1940s, he was always at the throats of the Axis powers. Like so many of the era, he also got a look-a-like sidekick. This sidekick’s name? The underwhelming name of Davey.

As a side note, there was also a Magno who appeared in Quality Comics magazines. That Magno, who looked vaguely similar to the Super-Mystery star, was later purchased by DC Comics. Quality Magno had magnetic and electrical powers. Later on DC used the name for a Legion of Super-Heroes character.

With the redesign challenge, we tweeked some of Magno’s unique characteristics and upgraded his costume a bit. Another change was his setting. Read on:

Hong Kong police officer Benny Jen was severely injured while on patrol — losing both of his hands and both of his feet. The devastating accident may have ended his career as a cop, but his bravery and intelligence brought him to the attention of an engineer-scientist who promised Benny an new life!

After a life-altering surgery that grafted robotic components to his body, Benny was transformed into Magno the SuperCop! As Magno, he serves the Super-Mystery Department, a special division in the police department that deals with unusual crimes and mystic threats to the island of Hong Kong!

While using his smarts and street-sense to solve weird crimes, he backs it up with his newfound abilities — super-strong, vice-like hands, spring-loaded feet that allow him to leap vast distances, telescoping limbs, and, most-importantly, the capability to activate powerful magnetic fields from his hands and feet. His magnetics allow him to catch bullets, rip weapons from the hands of his foes, climb walls and propel himself toward and away from metal objects.
Evildoers beware of Magno, Agent of Super-Mystery!