When country singer Johnny Cash’s tour plane crashed in the remote jungles of Africa, the Man in Black adopted a new life, launching the Jungle Tales of Johnny Cash!
Yes, he does indeed walk the vine!

Narrator: High above the jungles of Africa, a plane is in trouble.

Co-pilot: The radio’s dead, too!

In the back of the plane, Johnny Cash sits with the rest of his band. An announcement comes through the loudspeaker.

Loudspeaker: This is your co-pilot. Fasten your seatbelts. We have lost complete control of the plane. We’re going to crash!

The plane roars downward. The top of the forest canopy is visible.

The plane crashes in a fiery explosion. Shards of it blow in multiple directions. Birds dart into the air, panicked. Flying toward the reader is a visible guitar case, on it is the title font.

Title Font: He Walks the Vine

The crashed plane is shattered into a thousand pieces, spilled fuel burns around the wreckage and smoke pours into the branches of the jungle overhead. Despite the disaster, one man stands, silhouetted by the flames.

Johnny: Anyone? Can anyone hear me?

Johnny Cash steps into the clear. His clothes are torn and ragged. He is covered in scratches and dirt. Subtly note that the skin around his eyes is reddened and swollen.

Narrator: Only one man walks away from the horrible crash.

Johnny: They’re all dead! I’m alone in the jungle.

A close up of Johnny’s face. The redness around his eyes is clearly evident. His eyes are open and his once brown eyes have glazed over and turned to a glassy color.

Johnny has worked his way from the wreck. Behind him, you can see the burning debris. The jungle, however, towers above both Johnny and the wreck. He reaches out, blindly searching with his hands. Despite this, there is no sign of fear on his face — he’s Johnny Cash after all!

Johnny: Blind or not, I have to find my way out of this place!

Johnny: If there’s one thing Ma Cash told me it’s that her boy isn’t allowed to be a quitter!

We see multiple scenes of Johnny surviving in the jungle, though he’s still clearly blind in each.

Scene 2 – Johnny throwing the remnants of his torn clothes off.

Scene 4 – Johnny smashing a snake in the head with a rock.

Scene 5 – Johnny picking a fruit from a tree.

Scene 6 – Johnny hiding in a tangle of roots as a lion stands nearby.

Scene 7 – Johnny sleeping on a tree branch, high in the canopy.

Narrator: Over the following days …

Narrator: There are trials … tribulations  … and tests.

It’s nighttime, and a sound startles Johnny awake. He was resting high in the canopy, on a branch.

Johnny repositions himself and cocks an ear downward.

Johnny is shocked when he hears the cry of a woman down below him.

Johnny: That’s not an animal in trouble — That’s a woman!

Though blind, Johnny leaps from his perch to help, grabbing at a vine to slow himself down.

Johnny: And blind or not, I can’t let some girl get eaten while I sit around and do nothing!

Who is Memfis? What creature is after her? And will Johnny Cash survive as a blind jungle adventurer?

Read what’s next for the Man in the Black Loincloth!

But wait, what is this, really? 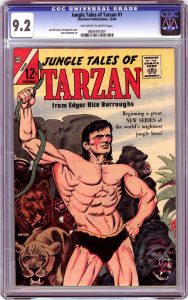 The Jungle Tales of Johnny Cash isn’t a real comic book. This is just a slightly PhotoShopped version of a “Jungle Tales of Tarzan” No. 1 as published by Charlton Comics in December of 1964.

It was posted recently on Facebook and several comments noted how much it looked like a drawing of Johnny Cash if he played Tarzan. Comics on the Brain saw an opportunity to make something fun with a little photo manipulation, and now we have “Jungle Tales of Johnny Cash.”

One thing led to another, and now we’ve got this fan-fiction script in the works!