One of those hard-to-forget-but-you-probably-forgot video games from the dawn of the arcade era is a release from Williams called “Moon Patrol.” The game is one you probably won’t know by name, but when you see a video of it you say “Oh yeah! That was so cool!”

Moon Patrol hit the arcades in 1982 and simply featured a roving all-terrain moon buggy as it rolled along a bumpy terrain. Your job was to blast everything you could while avoiding the most dangerous terrain.

Here’s a look at it via YouTube’s World of Longplay channel! 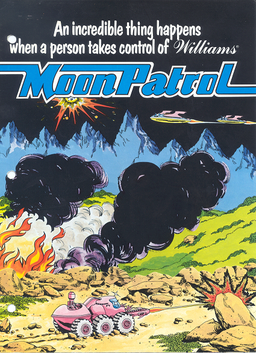 The memorable part of this video game is its “bouncy” animation. The way the wheels on the moon rover bounced was absolutely perfect. It very accurately mimicked the way a vehicle with great shocks responds to a crazy ride over gullies, trenches and potholes.

It’s not hard to wonder what the story was for Moon Patrol. According to the Moon Patrol entry at Wikipedia, here’s the bare bones of the story:

The player takes the role of a Luna City police officer assigned to Sector Nine, the home of the “toughest thugs in the galaxy”. The player controls a moon buggy that travels over the moon’s surface, viewing it from the side as it moves towards the right side of the screen. While driving it, obstacles such as craters and mines must be avoided, and various enemies such as UFOs from above and tanks on the ground must be shot down.

We here at Comics on the Brain can’t say if that was all the original designers planned, but we came up with an expanded background for it.

Congratulations on your new assignment, Officer Trey Kwillitty! As chief patrolman to the Luna City Mega Zone, you’ll be dispatched to protect the famous Green Hill Zone and beautiful Luna City itself. At the same time, you can expect to organize regular Moon Patrols of the Van Langren mine fields, Molesworth Farm and the notorious Sector 9.

Yes, each of these zones can provide a real challenge to even the most distinguished moon patrolman, but you can rely on Artemis Unlimited, the corporate potentate of the Mega Zone. At Artemis, we proudly back our designated Moon Patrol officers with the most sophisticated equipment available. In your case, Officer Kwillitty, that comes in the Hecate WMS-3900! The cherry-red Hecate is a fully equipped lunar surface vehicle, which includes an Irem M-52 Solar Cell Engine, full Low-G Suspension Kit, Triple-AX LunaGear traction control and a Chicago-style armament array.

With the Hecate, you’ll be able fully fulfill your duties as a Moon Patrol Officer. You’ll be based in Luna City and expected to maintain regular contact with 26 Checkpoint Stations across the 15 Zones. Each Checkpoint Station has its own unique challenges, though many are relatively passive, don’t allow yourself become too complacent. With that in mind, let’s take a look at some of these challenges:

Yes, there are many challenges to this position. However, with the knowledge from this briefing, your on-the-job experience, the reliability of the Hecate WMS-3900 and your own skill, this Moon Patrol assignment is sure to be fulfilling, fruitful and financially rewarding to both you and the corporation! Remember, the citizens of Luna City and the Artemis board are counting on you!

May the Three Lives always be yours!

The Moon Patrol You Want?

So what do you think of the expanded Moon Patrol? Let us know in the comments!

1 Comment on Moon Patrol: The Backstory We Need to Know