“A Matter of Gravitol” is an adventure module written by Dale “Slade” Henson for the Buck Rogers In the 25th Century XXvc role-playing game.

The system is essentially a facelift of the 2nd edition Dungeons & Dragons system from TSR. As a result, the module is formatted in a similar manner to those D&D modules of the time.

December 4, 3456: 18:05 GMT. RAM has broken a long-standing treaty with Venus. Ishtar has created a new form of gravitol that can be manufactured anywhere in the solar system, and RAM wants it. RAM launches a battle fleet, successfully capturing Venusian orbital space. The search is on for the scientist responsible for the new gravitol V12. RAM will stop at nothing to gain the knowledge she hold. Can you find her before RAM does, and convince Venus to help NEO in their quest for freedom?”

The 32-page booklet originally cost $6.95 and includes new equipment, ships and character profiles. The module is designed for three to four characters levels 6 through 8.

The interior of the book is easy to read and formatted for use on the game table. It features large print and divided into five major sections: Introduction, Background, The Adventure, The Reference Section and Ship Combat Scenarios. Each section is further divided into shorter parts with regular subheads. Of particular note is the type size – absolutely huge by today’s standards.

‘A Matter of Gravitol’ The Adventure 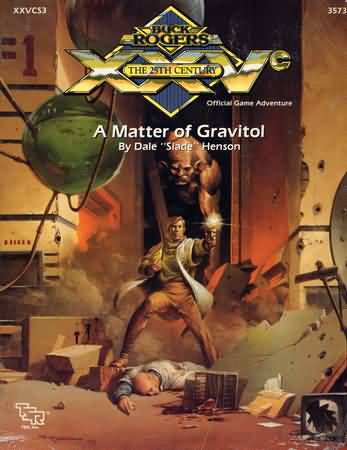 The story takes adventurers to three key locations. They start out at the outpost called the Sargasso, which was introduced in a previous adventure.

Next they load into a vessel called the C-17 Shroud, which they pilot through a few conflicts. Eventually they end up the Salvation III space station, where they get directions and equipment.

From there, they move on to their main objective – Venus. On the planet, they travel through the poisonous atmosphere using an all-terrain vehicle called a SATAV. This travel leads them through a variety of encounters and they ultimately end in a battle with RAM troopers.

Once they recover the gravitol V12 formula and its creator they return to Salvation III for a heroes welcome.

The entire adventure is probably just 8 to 15 encounters, and pretty much railroads the characters the entire way. Their options, other than following the orders they were given, are limited. There are no alternate paths and or varying goals  to really make it possible.

As a result, there’s just not much playability to it. RPGs are about choice and variability – something not really offered in “A Mater of Gravitol.” Instead, it’s more like a side-scrolling video game where you are pushed from one encounter to the next.

‘A Matter of Gravitol’ Reference Section

This section nearly makes the cost of the module worth the purchase price. Starting on Page 19 (of 32), it gives readers new characters, technology, ships and a few additional rules.

The new characters come with full background descriptions, game stats and other information. They are:

Each of these characters’ backgrounds include additional hooks and ideas for use in later (or earlier) adventures.

These characters, plus all the other characters available from other modules, make up a large, inter-connected web in which the XXVc Universe is set. It would have been great to offer them all in one book along with a power-structure chart in which they all reside. Just like TSR’s other sci-fi franchise, Star Frontiers, the XXVc really lacks a strong library of enemies to create conflict. Even better, multiple catalogs would be best – a volume on NPCs/troops, another on “monsters,” one for robots and one for vehicles/robots. Still, these tidbits at the end of each module are a big help.

New technology featured in this book include a Venusian SATAV and a Venusian Environmental Suit. These two items are OK, but both are (inexplicably) reclaimed at the end of the adventure. Why not just give them to the PCs? Seems a little silly, especially at this advanced level.

New ships are also provided. They are the C-17 Shroud, the RMS Memnonia and the RMS Phytus. These stats can be duplicated for additional encounters with similar or sister ships. Additional stats are offered for ships used in three combat scenarios.

‘A Matter of Gravitol’ Summation

This module, as an adventure, lacks many opportunities for free-will choices from the NPCs. As a result, the characters may feel stifled and,if they turn away froom the storyline, then the Referee may not be suitably prepared.

The reference section, however, provides some helpful expansions to the XXVC Universe, which may make it worth it for Referees who are looking for additional game material.

Full PDF of “A Matter of Gravitol”

Buck Rogers XXVc is a Comics on the Brain blog series exploring the Buck Rogers publications by TSR in the 1990s.