In the modern times, hockey is a pretty glitzy sport. Stadiums cost hundreds of millions of dollars and rookies land multi-million dollar deals. Even the ticket prices can set you back a paycheck. 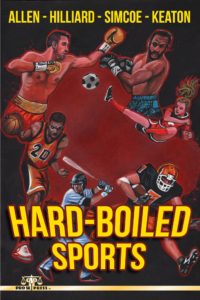 In John Simcoe’s “Ten Ways to Throw a Hockey Game,” one of four short-stories in the newly published “Hard-Boiled Sports,” readers are thrown back to the 1970s for a look at hockey when it was so polished and pleasant.

The story focuses on a veteran player who’s racked up gambling debts and is desperately looking for a way to make amends with the local mob boss. The result? The vet comes up with 10 ways to throw a hockey game!

Does it all work out? Can he hold up while selling out? Find out in “Hard Boiled Sports” from Pro Se Productions, which also features an additional hockey story from writer Joe Hilliard and two boxing tales from Sharae Allen and M. Keaton.

Looking for even more hockey action from John Simcoe (that’s me, by the way!) check out his collection of webcomics, “The Downward Spirals: 36 Minute Major,” also available for order on Amazon.