Comics on the Brain has already mentioned how much we enjoyed the previous Sitcomics book we purchased, Blue Baron No. 1. Our review there praised it for its pretty-much done-in-one story and its concerted effort to keep things PG. The same kudos go out to another of the Sitcomics productions, “Telepathetic” No. 1. 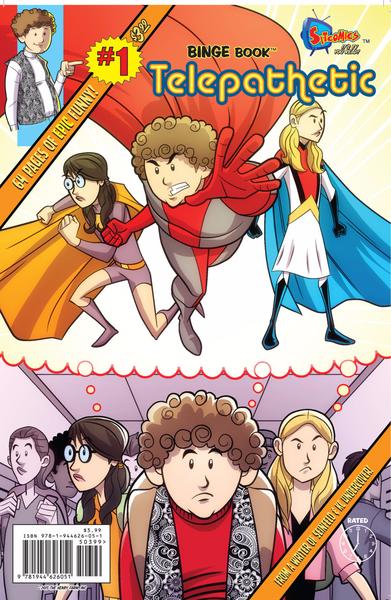 Now you may cringe at the idea of a PG comic. You may want blood and gore and sex and swear words — but some people do not. In fact, some people want a comic they can share with their kids. Some of us want a comic that entertains without feeling like a creepy  voyeur. We simply want an adventure story without getting into the complexities of the real world.

So, in short, we’re always looking for the YA version of superhero comics, and with “Telepathetic,” that’s what Sitcomics delivers.

Written by Darin Henry and illustrated by Blair Shedd, “Telepathetic” tells the story of teenagers who find out that they are telepathically connected. At the same time, the teens are also developing other mind-based superpowers that elevates them even further. In most comic book stories, that means a cape and fancy chest emblems aren’t far behind. Not so in “Telepathetic,” where our teens use their new powers to drive themselves up the social ladder.

All the while, Darin Henry keeps the tone light and brings out more than a few laughs. Likewise, Blair Shedd delivers wonderfully stylistic art that perfectly suits the tone while being appealing to comic fans and casual readers.

So, once again, we have to extend our highest recommendation to readers on another Sitcomics publication. Telepathetic No. 1 is a charmer. You’ll like it. Your kids will like it, and you’ll close that last page with a smile on your face.