In the wake the tidal wave that was left by Edgar Rice Burroughs’ “Tarzan” series, innumerable copycats appeared. Some put a woman in the Tarzan role. Others put their “ape man” in other environs. Others offered a different time period.

Then there was Jan of the Jungle, who pretty much copied the whole Tarzan mythos with little to differentiate him from his inspirarion. 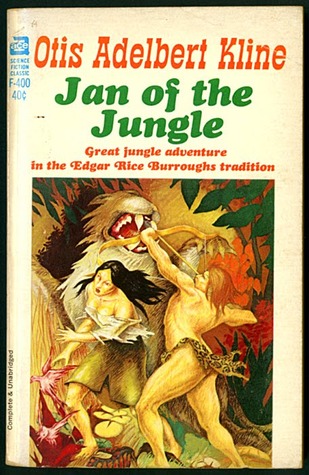 Written by Otis Adelbert Kline, the story of Jan begins with a jealous doctor who kidnaps the baby Jan, secretly raises him in a cage and then stalks the jungle teen after the boy escapes.

Along the way, Jan learns how to speak the chimpanzee language, wrestle pretty much any animal he comes across, become a brilliant architect (jungle huts only) and fire his long bow better than Robin Hood.

The plotin the initial “Jan of the Jungle” story is a meandering one, too. About a half a dozen times, Kline could have written “The End,” but just as it seemed like that was about to happen, a squirrely new plot twist happens and Jan gets dragged through another few thousand words of trials.

By the time Comics on the Brain finally finished this book, we were simply exhausted of reading about Jan, his desires and all the strange locations Kline managed to develop out of South America. If they were all explored in separate, shorter stories, we would have been fine with this book, but all at once was just a little overwhelming.

In short, “Jan of the Jungle” is probably interesting to die-hard Tarzan fans, but a casual reader will be quickly bored and exasperated. No matter how you slice it, Jan seems like a pale impostor to the original driven by the need to flesh out the word count.