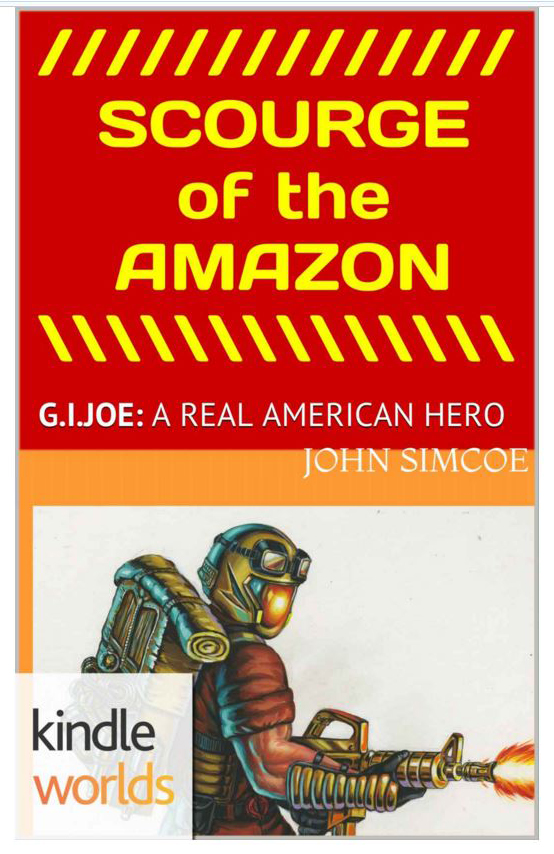 It’s official! I’m proud to announce the publication of my first G.I. Joe Kindle Worlds novella. The piece, which is about 43,000 words long, was a real labor of love — I had a lot of fun playing in the sandbox that is the Joeverse. It was a bit of a thrill to pull together my ideas, pick characters and throw them together for a battle royale!

Titled “G.I. Joe: Scourge of the Amazon,” the story takes place in Manaus, Brazil, where a small squad of Joes goes on the hunt for a kidnap victim and the Cobras responsible. Along the way, they come across as odd of a collection of Cobras as I could assemble: Cobra de Aco, Scalpel, Frag-Vipers, Sea Slugs, Tele-Vipers and regular Cobra Blueshirts.

Nope, no Cobra Commander, Destro or Zartan. There’s too many interesting bad guys in the Cobra ranks to stick to those three!

Who’s on the Joe squad? I tried for an equally oddball cast. I’ll name a few and let you discover the rest when you check out the sample included on the Amazon site.  The team, which I call the Monkey Squad, is composed of:

That’s right — no heavy hitters! Forget Snake Eyes, Duke, Flint and Roadblock! I wanted a team that’s a little left of center, and I had fun throwing them against everything I could find.

I’ve talked before about my love of Sgt. Flash, and the basic idea of this story was to bring together as many of the laser troopers as I could. As a result, Sgt. Flash was joined by Sci-Fi, and Grand Slam. That core group find themselves working against Cobra de Aco, a South American character who bears an uncanny resemblance to Flash and Slam.

In the real world, Cobra de Aco was a figure produced for the South American market and he shares an action figure mold with those two original Joes. His head, however, uses the Commando-mask head that Snake Eyes started out with. By mixing the two figures, the South American producers had a truly unique character that has rarely been explored!

What does all this mean for the Joes? Find out by getting your own copy of “Scourge of the Amazon!”