A while back, in one of our Twitter review collections, we mentioned that we read “The Hot Shot Hamish Annual 2009,” with the World Cup soon to arrive in Brazil, we thought we’d give the massive collection a more thorough look. Enjoy! 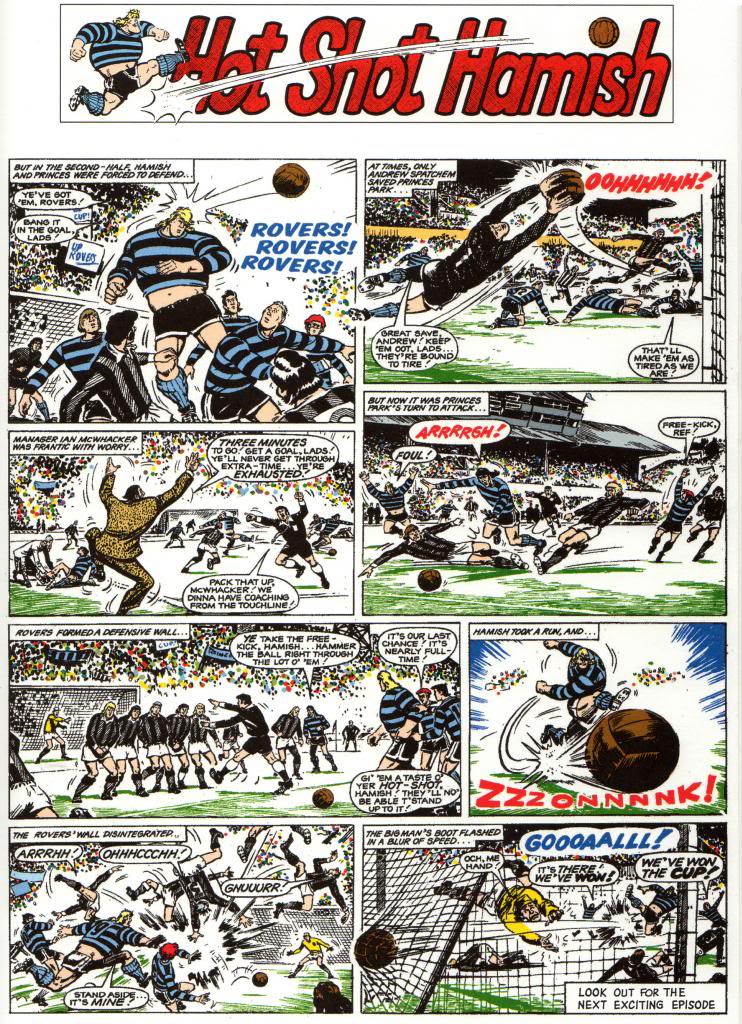 The realm of sports comics is relatively small. In fact, as far as an American comic book readers, its hard to think of any that aren’t directly tied to a particular person or athletic league.

There was NFL Superpro from Marvel and there’s also been a smattering of NBA comics here and there. But what about a comic that simply tells the story of a team or person as they play their favored game? That’s where Comics on the Brain came up stumped.

Sure, maybe back in the golden age of comics there were some sports themed comics, but none that achieved legendary status or anything. The same goes for comic strips. Yes, there are sports themed comics published even today, but the one I’m thinking of — In the Bleachers — doesn’t focus on its characters. It’s a “joke-a-day” comic that switches from sport to sport.

With all that in mind, “Hot Shot Hamish Annual 2009” turned out to be quite an interesting read. Published by Scotland’s Sunday Mail newspaper, the hefty hardcover takes us from Hamish’s rough-and-tumble backwoods life in the Scottish Hebrides to life in the big city where he plays professional football (that’s soccer to us Americans). Hamish is so good that he propells his team through the divisions and is ultimately snapped up by bigger and bigger clubs. Did he ever make it to the World Cup? In this book he doesn’t but football fans aren’t likely to care — a game is a game!

The book itself offers no credit as to Hamish’s writer, artist or creator. A search on the Internet reveals the character is “The creation of Fred Baker and normally drawn by Julian Schiaffino.”

Wikipedia explains that the Hamish strip ran from the 1970s to the early 1990s and the artwork certainly has that 1970s feel. The inks are a little thick if you ask me. Still, the art is funny, varied and appealing, especially when the giant-sized Hamish is towering over the other characters. There’s something to be said for Hamish’s design too — he smacks of being a superhero. He has a barrel chest, a jawline you could use as a straightedge, wears a bright blue uniform and a thick mane of blond hair that must drive the ladies wild.

The story, revealed in one-page sequences that end with a cliffhanger, takes on the typical Scottish stereotypes as the country-bumpkin learns what life is like in the Big City. In this case, the Big City is Glasgow.

One might best compare Hamish to Popeye. He’s fearsomely strong, skilled at his trade but never seems to pull it all together. The humor of the strip is much the same too — gentle and reliant on misunderstandings and exaggerated action. In this case, the exaggerated action is almost always on the football pitch, where Hamish relies on his patented “Fireball” kick, his Hulk-like size and strength allow him to plow through defenders and his never-ending stamina means he’s never benched. When the story turns more adventurous, readers know to rely on Hamish’s sense or right and wrong and his sense of justice.

But what would American readers think of Hot Shot Hamish? First its important to remember when “Hot Shot Hamish” first appeared on the scene and where — 1970s Great Britain. Back in those days, kids were still reading comics and hadn’t even imagined there would be such a thing as video games or cable TV.  For modern American audiences — maybe even British and Scottish ones too — this won’t be some must have. Sure, it’s quaint and interesting to a person who avidly collects comics, but it’s not going to stop some regular kid from playing their FIFA PS3 game.