As RPG game players, the Comics on the Brain staff has still been playing the good old Dungeons & Dragons 3.5 edition rules (and the slight upgrade found in Pathfinder). As such, we’re pretty darn familiar with those rules and we tend to pick out little faults here and there.

One of those faults that still aggravates us is the terrible amount of real time it takes to adjudicate a combat encounter. A battle that lasts just two or three minutes inside the game can take hours to resolve at the gaming table. 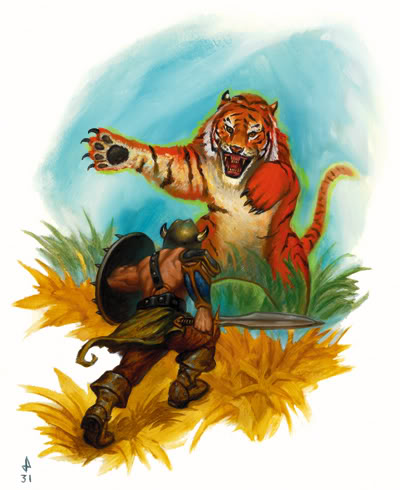 With that in mind, we started to toss around an idea on how to speed up combat. The genesis of it was from the D6 System supplement called Psibertroopers. In that system it was called the Chesspiece Goon System, in it all but the most important badguys would fall unconscious after a minimal fight.

In particular, I thought about how movies and television portray combat. These combats usually only involve one hit, whether it be a knife into the heart, the snap of a neck or single bullet hit. Whether these hits result in death or unconsciousness is unknown.

We even tried it when we GMed a game once. As long as a player character hit an opponent with a substantial hit, we counted them out. But that made it a little too easy. The PCs were wiping the walls with the goons, who had little time to react.

So we thought some more and now we want to try this model, which could really help a d20 or an online game zip through combat. We present it here in d20 terms, but those terms and the numbers associated with them could be adjusted for any variety of combat-heavy games.

While we’re no d20 mechanics wizards, here’s what we came up with:

Once a successful hit is determined, follow this to tabulate the effect.

The basic formula: The character rolls a die to represent his resistance to an opponent’s weapon, which also gets a roll. In short, we call it Character Side vs. Damage Side.

Wound modifier:  For each successful hit after the first, the character has a -1 to his Character Side total. Eventually these wounds will mount up, causing the character to collapse. The object is to make your opponent’s wound modifiers pile up first.

Healing:  An wounded person heals one wound modifier plus his character level per 8 hours of rest.

Unconsciousness: Attacking an unconscious person can kill them. To determine whether they are killed, a successful “to hit” roll must be made. Once that’s determined, use this formula for damage: Character Side (ECL + Fortitude Bonus + Wound Modifier) vs. Damage Side (as above).

Regaining consciousness:  An unconscious person becomes conscious according to this formula: 1 + wound modifier = Number of hours until reviving.

Experience: Rendering a person unconscious means they are defeated. Full experience should be awarded. 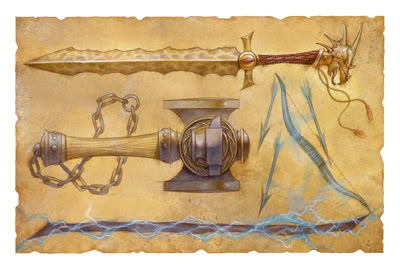