The comic strip B.C. has been around since the late 1950s and the 2007 anniversary book “Growingold with B.C.” is an amazing display of Johnny Hart’s talent as a cartoonist and a comedian. 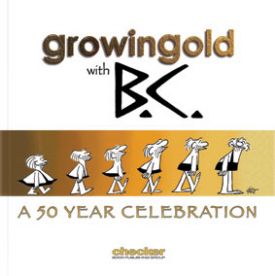 Published by Checker Book Publishing Group, the book was started prior to Hart’s death and completed posthumously. As such, it offers the perfect snapshot of his talent through the decades.

The strip, as most people know, features a cast of cavemen who have very modern ways of thinking about things. Part of the humor of the strip is that these cavemen are so sophisticated, but, really, that’s only a fraction of the humor that Hart was able to eke out of the strip.

Aside from those types of gags, Hart went in many different directions with B.C. — sight gags, sports humor, jabs at domestic life and politics were all common topics.

Working from those multiple fronts gave Hart lots of leeway to make his strip shine, and “Growingold” really proves it. Laughs are part of every page, and readers also get to learn about the origins of the comic and its primary characters. It turns out that just about all of the cavemen were based on some of Hart’s old coworkers and friends.

Beyond the realm of cavemen making jokes, Hart quickly used the strip to explore other avenues. He’s got ants making jokes. He’s got sight gags with dinosaurs. He’s got the ever-pleasant apteryx. The plight of the clams. And of course, there’s adder who’s just trying to avoid getting “whammed.”

Further, he also had a number of recurring gags that kept the strip in the limelight. There’s the floating tablets, the wise sayings, visits to the Olympics and of course “Wiley’s Dictionary.”

The dictionary feature brought the biggest laugh of the book with “Hypocritical,” which Wiley defined as “A sad news flash from the zoo.”

“Growingold with B.C.” is everything that’s great about B.C., and a wonderful example of one of the cartooning world’s greatest talents.