There’s a short list of states that don’t get much respect. Alabama, Mississippi and Kentucky each have a spot on that list, but none is considered as backwoodsy as West Virginia. The thing is, here at Relocating the Marvel Universe, we don’t necessarily share that view of the mountaineer state.

Why? Because we’ve actually been able to spend quite a bit of time W.Va., and have found it to be a heck of a nice place. We’ve even vacationed there!

So, we hope we can finally help W.Va. get its due. Yes, welcome to the Marvel Universe version of… 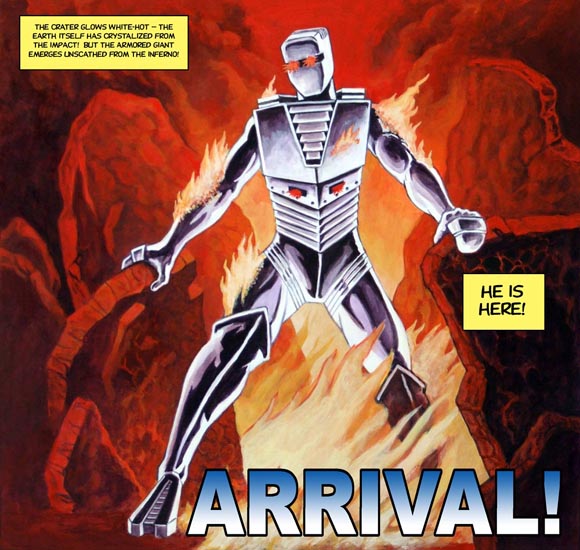 The alien known as Rom the SpaceKnight has long since completed his mission to end the Dire Wraith threat to the universe. The trouble is that he is no longer wanted on his homeworld, so the silvered warrior has instead opted to stay on Earth, and West Virginia in particular. The relatively sparse population means that he can, if he so chooses, avoid human contact all together. At the same time, he knows he was given his armor and weapons to help in the innocent, and does his best to keep tabs on the are.

Though he’s mostly inactive as a superhero, he quickly responds to obvious threats to the region — often helping out in natural disasters in particularly. He’s less attuned to more conventional threats, and often needs some prompting by his human friends to set out against criminals, invading aliens and other, more aggressive foes.

Rom seems to have adopted the Charleston area as his home, and can often be seen zooming about the skies there and in the areas to the East.

Because he’s so infrequently seen and rarely photographed or publicized, many West Virginia residents believe they’re being protected by more well-known heroes, such as the Silver Surfer, Iceman or Sentry in some sort of energy form.

Yeah, I know Rom doesn’t really exist in the Marvel Universe. He’s a licensed character, but even back then he was a really important part of the Marvel Universe. He deserves to come back to the M.U., and he’s going to use West Virginia as his home base when he does. In truth, much of the Rom series did take place in the fictional town of Clarion, W.Va., so he’s a natural!

Art credit: The above piece is a fan recreation of Rom’s first appearance. Not hard to imagine him in Marvel West Virginia on a permanent basis. Check out John Douglas’ work!

The radiation transmitter known as Missing Link does his best to look and act normal, but ever since he made his presence known in the hills of West Virginia, the federal government has been coming to him for help, and eventually reached a deal with the creature.

In exchange for some basic freedoms (namely permission to wander within a very specific area), Missing Link was turned into a secret power source for the government, primarily used to charge some of its superhuman-fighting weapons. Since he primarily emits radiation, his energies are often used to “poison” some of its weapons, including tank shells, bullets and edged weapons. To do so, they just hand the weapons over to him and he infuses them with the deadly energy.

When he’s not fueling America’s radioactive artillery, Missing Link spends his time stalking criminals in the area — often wandering along a thin band of territory that takes him into southern Ohio, Kentucky, Tennessee and other remote parts of Appalachia. Unlike most superheroes, Missing Link rarely encounters super-powered beings. Instead he deals almost exclusively with street-level crime and finds himself particularly compelled by abuse cases. When he encounters suspects he deems guilty, he often metes out deadly justice.

When Missing Link, who has a relatively primitive intelligence, does encounter superhumans in his travels, he often battles them regardless of their allegiances, disposition and intentions. He simply is intent on protecting his territory from any intruders, and that territory — even according to the U.S. government — is the most remote parts of Appalachia.

Notes: Missing Link? Who’s he? This infrequently seen villain/monster gets a new lease on life in Relocating the Marvel Universe not just because he’s a West Virginia character, but he’s been portrayed with enough complexity that he could be used as a Hulk-like character for Appalachia. You won’t find many characters that can do that!

One of the most formidable superbeings on the planet, Sentry makes his home close to Washington, D.C., in Martinsburg, W.Va. In fact it doesn’t particularly matter where Sentry lives, since he can respond to any threat in a matter of moments.

Still, Sentry calls Martinsburg his home, and only the most foolish and most ignorant supercriminals show their faces in that town. Such foes are dealt with so quickly — so efficiently — that they barely register as a threat to the police before being dumped in their laps.

Sentry has made his “secret headquarters” underneath the old B&O Railyard, where he houses his CLOC computer that assists him in his daily activities.

The primary thing that keeps Sentry returning to the area is his familiarity with the region and the fact that he has lingering family connections in Martinsburg. While he’s generally very busy with his worldwide patrol duties, he always keeps a close eye on this region, often to a fault. He is more likely to respond to incredibly minor incidents there, while ignoring major disasters and massive conflicts elsewhere.

Notes: Think of Martinsburg as Superman’s Smallville. This is his homebase and he’ll never let anything happen to it, no matter what.

Though she’s not always been a hero, the woman known as Pandara has taken residence in the Wheeling, W.Va., area after a lengthy incarceration following several encounters with Thunderstrike. In that time, Pandora essentially became a new person and vowing to defend the Earth from her former master, Tantalus.

She settled in Wheeling because of its proximity to a gateway between the surface world and the Deviant city known as Lyonesse, the base of operations for Tantalus. In general, Pandara believes it’s her duty to foster some sort of working relationship between the human world and Lyonesse, even though the Deviants rarely bend to her will.

During her incarceration, she learned of new ways to use her magical, demon-filled box. Instead of urging the beasts therein to kill creatures she looses them upon, she has trained them to use more subtle tactics.

Aside from dealing with the constant Deviant threats, Pandara, who barely registered as a blip on the supervillain radar, has found herself to be a champion of the Wheeling area, eagerly responding to threats against the region and volunteering to help any hero who finds him or herself nearby. Further, because of Wheeling’s geographic location Pandara can often be found roaming southwest Pennsylvania and eastern Ohio.

Notes: One can’t help but want Pandara to be turned into a good guy. Before, she was simply a devious sycophant for Tantalus. Having her see the errors of her ways and giving her a mission in life helps round out her character.

After nearly being killed by his “cousin” Venom, the symbiote-human superhero called Hybrid got the message and fled the NYC area. Quite surprisingly, he found a new home along the Interstate 79 corridor that crawls through West Virginia. Little did he know that the move would turn him into the living embodiment of an urban legend.

Scott Washington, the current host of the Hybrid sumbiote, was once one of the Guardsmen, the armored security U.S. security team. Though he’s no longer part of that unit, he made use of his role of security specialist at the FBI’s massive Clarksburg facility.  Unlike the common image of an FBI field agent, Washington is simply a desk-jockey analyst known for his unconventional strategies, often fueled by the conflicting personalities of his symbiotes.

While not exactly a do-gooder crime fighter, Hybrid isn’t the kind of person to just sit around and do nothing either (at least when he’s off the clock). With that in mind, he often goes on patrols, looking for something to do.  The problem, of course, is that crime in Clarksburg isn’t terribly substantial, so he often finds himself exploring the lengthy corridor stretching from Morgantown to Charleston on I-79 and Point Pleasant to Parkersburg on I-77.

Despite it being a remarkably small town, Point Pleasant, W.Va., seems to be a particularly strong draw for Hybrid. The town is a veritable hub of strange activity, his frequent visits there have led the residents of the entire state to label him Mothman. Not being interested in explaining himself, he continues to foster the notion that he’s the living embodiment of the urban legend, going so far as to purposefully perpetuate the belief and act out the part.

Further, most people believe that Point Pleasant is his homebase. Instead, he simply makes it part of his patrol route. As a result, he’s uncovered a variety of oddities in the area.

Notes: If you follow the activities of Venom and Carnage, you’ll know that Hybrid is actually dead, having been killed by Venom in the symbiote-version of the Armor Wars. That being said, we all know symbiotes are hard to keep down, and they positively love their primary hosts. Let’s just pretend that Hybrid got better because the Marvel Universe needs its own Mothman.

Art credit: The above piece is a custom-created Hybrid figure you can find on Figure Realm.

Want to see the superheroes in your state? Then visit the Relocating the Marvel Universe series hub!