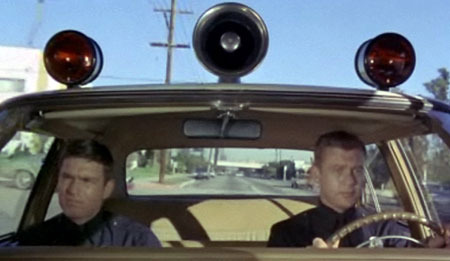 The “Adam-12 Season Two” DVD box set lingered untouched for many weeks in the Comics on the Brain office. No one, it seemed, had any interest in a cop show from 1969.

It wasn’t long before it was buried by gobs of other stuff, and then shuffled from the office’s “free-if-you-review-it” pile to a filing cabinet that contains press packets for films so old that they were still producing press packets for them (around 2004).

But then we began to feel a little pity for poor “Adam-12 Season Two.”  CotB had never actually seen an episode of the show, and somehow it had completely escaped my pop-culture radar.

A quick check on Wikipedia revealed that it ran for seven seasons. That’s a darn good run, we said, and decided to crack open the orphan box, even though it’s readily available on NetFlix streaming.

The show is a half-hour police “ride-along” drama covering the daily activities of LAPD Officers Malloy and Reed.

Through the season, their assignment hits upon everything real police officers deal with: the mundane (the neighbors are too loud), the humorous (a woman keeps a lion in her apartment), the heartbreakers (missing kids) and the deadly (crazed snipers).

The show stars Martin Milner as veteran Malloy, who reminds me a lot of John Wayne in full swagger, and Kent McCord as rookie Reed, who reminds CotB a lot of an old college roommate (not that you care).

Together, they man patrol car Adam-12 to prowl the “mean streets” of Los Angeles before those streets got Rodney King mean.

Want proof? The title sequence features a deadpan dispatcher sending Adam-12 to break up “a fight group with chains and knives.”

Not exactly the biggest worries for cops nowadays.  Whatever the case, the boys of Adam-12 see a lot more action in one season than Mayberry P.D. ever did.

According to several Internet sites, “Adam-12” was lauded for its accuracy in showing police procedure, and allegedly was used to help train real-life cops.

It’s very much akin to its parent show, “Dragnet,” and its cousin “Emergency!” (both of which I have seen and know that McCord shows up regularly as a beat cop in “Dragnet.”) Further, this show is far less right-wingy than “Dragnet,” which we get a real kick out of for its kitsch value.

“Adam-12” also brings to mind reality-TV’s “Cops,” since more than half of any episode is about the methodology of the job.

For modern viewers, Officers Malloy and Reed are probably far too clean cut. They rarely lose their cool, are buddies with all their equally straight-shooting co-workers, are completely incorruptible and thoroughly satisfied with their lot in life.

In that, their earnestness is actually amusing, and when you compare “Adam-12” to cop classics such as “Hill Street Blues” and “The Shield,” you realize it’s a show without much depth. But depth isn’t everything in CotB’s book. This show is very entertaining and compelling in a Discovery Channel sort of way. You want something to veg out to? Officers Malloy and Reed provide just what you’re after.