Comics on the Brain finds it interesting when there are well-crafted parallels in storylines. Watch an episode or two of the 1990s TV show “Northern Exposure,” and you’ll see some wonderful, intentional parallels in most of the stories.

While the main story is unfolding, a similar story is explored and expanded to take on a totally different direction.

What’s even more interesting than intentional parallels in stories are unintentional ones.
Take a look at three unique DC characters Terra-Man, Booster Gold and Alpha Centurion and you will see something interesting.

The three characters are Superman-related characters and have some obvious commonalities — interactions with Superman (of course), Metropolis and his supporting cast.

And their schtick? One is a cowboy-themed supervillain, the other a media-obsessed football jock, and another a military man turned hero with a Roman legion theme.

Read their origins and all their differences wash away. There’s something at their core that makes them similar — and its something that just screams to be connected in some future story — they’re all time-displaced citizens armed with weapons from “the future.”

That leads CotB to suggest that these three characters need to be pulled together. Perhaps they need a common origin.  Perhaps the same aliens that kidnapped Terra-Man are the same that conscripted Alpha Centurion. Or even better, what if the “aliens” they thought they encountered weren’t aliens at all, but Booster Gold operating as one of the Linear Men.

CotB would even take it a step further. Move the trio out of the Metropolis zone (where they are consistently overshadowed by Superman) and into another city. Make Alpha or Booster the star of a new book or miniseries and let an interesting, time-hopping plot unfold as they battle for supremacy in the modern world. 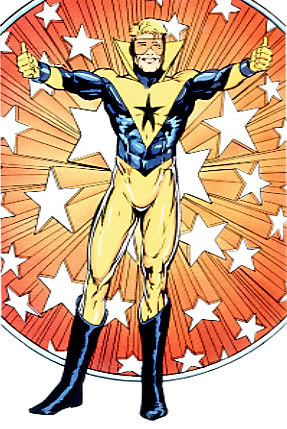