Back in Comics on the Brain’s earliest days, we had finished reading the latest issue of X-Men, or maybe it was an Avengers book, and, satisfied that not even a sliver of additional detail could be extracted from the actual story, we started studying the advertisements.

There among the offerings of “1,000 tiny magnets” and Hostess Twinkies was a very special advertisement. It was from Earl R. Phelps, and he promised me that he could teach me how to draw superheroes.

We begged our mom for the required $3.95 (the same cost as a Star Wars figure!) and sent a check off to Cleveland, Ohio.

Weeks later, a plus-sized envelope arrived and inside was a short booklet by advertising legend Earl R. Phelps.

Legendary in the world of comic book advertising, that is. He never drew any comic books himself, he just made a little book about drawing comics.

As fast as a flash, little CotB ran up the hill to the house and tore open the envelope. Inside, Phelps greeted his students:

Hello, my name is Earl Phelps and I have been drawing for many years.
It was my first time starting school that I can recall picking up a pencil and drawing.  My kindergarten teacher drew a picture of a elephant and had
everybody in the classroom draw it, I’ve been drawing ever since.

These books have very few words because the illustrations speak for themselves.  This was done to induce you to pick up a pencil and start drawing.  The only way you can learn how to draw is to draw, and that is the purpose of these books to implement practice, practice, and more practice in learning how to draw to the best of your abilities.

(The image at right is the newer version of the booklet that I have. The cover is pretty much the same with some minor adjustments.)
And then, turning further into the book, CotB saw this: 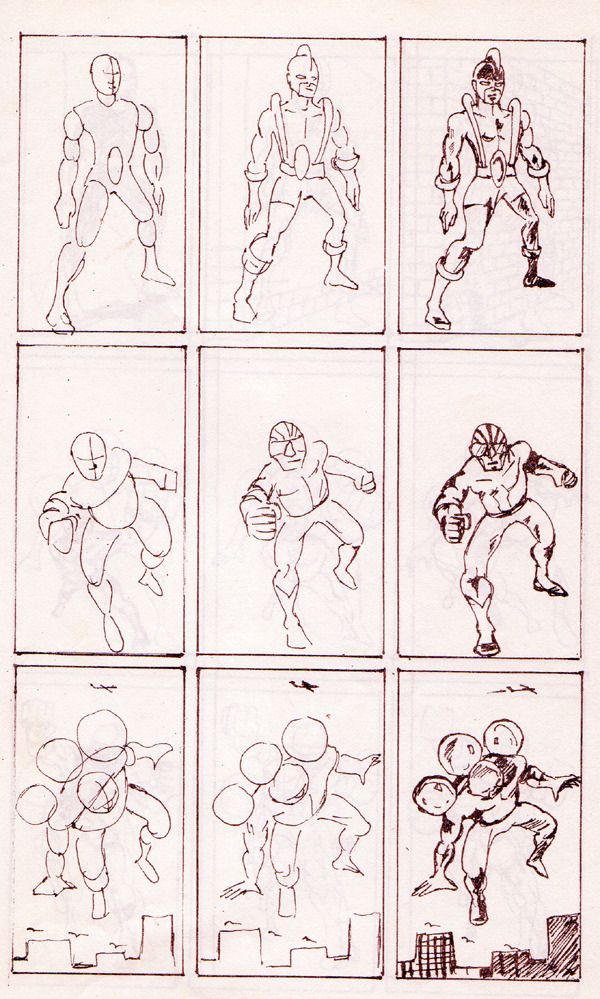 And the instruction continued on like that. No suggestions. No hints. Just three panels toward a roughly rendered product.

Little CotB was most disappointed.

Sure, at the time Little  CotB wasn’t much of an artist, not even as good as Phelps, but immediately Little CotB knew that every comic artist being published by Marvel and DC was 10 times better than this guy.

Under the spell of Earl R. Phelps

Still, Little CotB sucked it up, and practiced some of the Phelps poses and characters. We drew the balloon guy above. The cover featured a Red Tornado type, and we drew him too.

But soon, even CotB’s enthusiasm for our new purchase waned, and the little booklet disappeared into the recesses of our childhood home.

Fast forward about 30 years and going through an old collection of papers, we came across that original book by Phelps, “How to Draw Your Own Supercharacters.” It wasn’t a flea market find. Nope, it was the one that was mailed to us all those years ago.

Looking at it today, it really is an awful piece of work. But it was only then that CotB realized that it was just a publication by a fan. Someone who had the enthusiasm that CotB had back then and the enthusiasm we still have today.

Even better, an internet search finds that the Phelps Publishing company is still publishing books today. Its website is offering three books (one of which is my original purchase with additional pages) and three booklets.

The Phelps team promises even more to come. According to its website, it is planning to publish several graphic novels in 2012. It’s also looking for artist submissions.

CotB thinks that’s pretty neat. The Phelps company has been publishing for more than 30 years now.