Welcome to a look at the people (and things) that ought to be located in North Carolina within the Marvel Universe.

One of the most prosperous states in the union, North Carolina has undergone huge changes since the 1980s when it began to abandon its reliance on tobacco production, in fact, many would say it has redeemed itself from the backwater it was and became something new, vibrant and prosperous. The changes mostly came from new industries moving into the area and turning a blind eye to its past. In the Marvel Universe, those changes also brought a whole batch of superheroes — many of whom started out as villains. 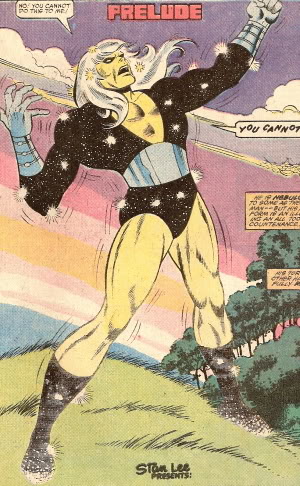 Though his activities are closely watched by the Defenders, the Fantastic Four and the Avengers, the being known as Nebulon resides in Charlotte and often serves as its primary protector. In fact, Nebulon makes it a point to show up in public often and serve as a sort of safety monitor for the humans in the entire region, jetting as far south as Florida and as far north as Pennsylvania. Despite all this benevolent activity, many of the world’s superheroes are concerned: The last they knew, Nebulon was a major bad guy — and he was quite dead. Some theorize that this Nebulon is actually another member of the Ul’lula’n race who has opted to impersonate Nebulon. Others say that he was resurrected through unknown means and also switched sides. Regardless of the circumstances, this Nebulon has shown nothing but compassion for the humans he considers “his people.” The suspicious superhero community, however, has decided to keep him at an arms-length while spying on him as often as possible.
Nebulon is sometimes accompanied by Supernalia, another Ul’lula’n who has previously made her presence known on Earth. Like Nebulon, she is viewed with intense suspicion by the superhero community. Oddly, she is only ever seen in the company of Nebulon and never by herself. Some have theorized this is because he is actively trying to rehabilitate her or that she is being mind-controlled by Nebulon.
In truth, Nebulon’s renewed activities on
Earth are the result of a deal between him and the Iron Man-led group “The Illuminati,” in which he has been given refuge on Earth in exchange for his service to the South Atlantic region of the U.S., which the group felt was under-protected at the time he was assigned. Rather than take his duty bitterly, he has opted to engage in it on whole-heartedly, though Supernalia wars with him on the subject.
Notes: Nebulon was one of the first supervillians that really intrigued me. His golden skin and strange “starfield” uniform always impressed my superhero fashion sense.
Beyond that, he has a supreme 1970s look that encapsulates that decade. Why not have him a little obsessed with the time period, but not in a kookie way. He just seems a little backward to more modern folks.

After multiple run-ins with Spider-Man, the superhuman known as Sundown spent time in prison and upon his release immediately moved down south where he could utilize his science degree in the the region’s growing industries. Though initially considered a criminal, Sundown was only that because of his reaction to the chemicals that gave him his powers.
In reality, he was just an average scientist. Now, years later, he works in Raleigh to quell the occasional threats that surface in the area.
Notes: Sundown is one of those interesting incidental characters created as part of the Untold Tales of Spider-Man series.  The ret-conning comic simply added a few extra tales into the early years of Spider-Man’s history. Unfortunately, very few of those stories seem to have been fully intregrated into modern continuity.

Like Sundown, Ricochet left the Northeast to the newfound prosperity of North Carolina as well as its educational opportunities. Using his powers to land several sports scholarships, he moved to the area and led UNC to several national championships in multiple sports, an act that made him a media darling. Rather than continue his career into professional sports, he opted to retire and work the “Research Triangle” area as a news reporter, typically covering the crime beat, but also sports when the news was slow.
In truth, he uses his leads to do the same thing that every other superhero journalist does — fight bad guys. As such, Ricochet is now affectionately called the “Spider-Man of the South.” While largely a local phenomenon, he’s well lrespected in the state.
Notes:  We can never get too many Spider-Mans, can we? And why not put one way down South!
There he can bound around his own city, and he”ll do just fine without all the skyscrapers. 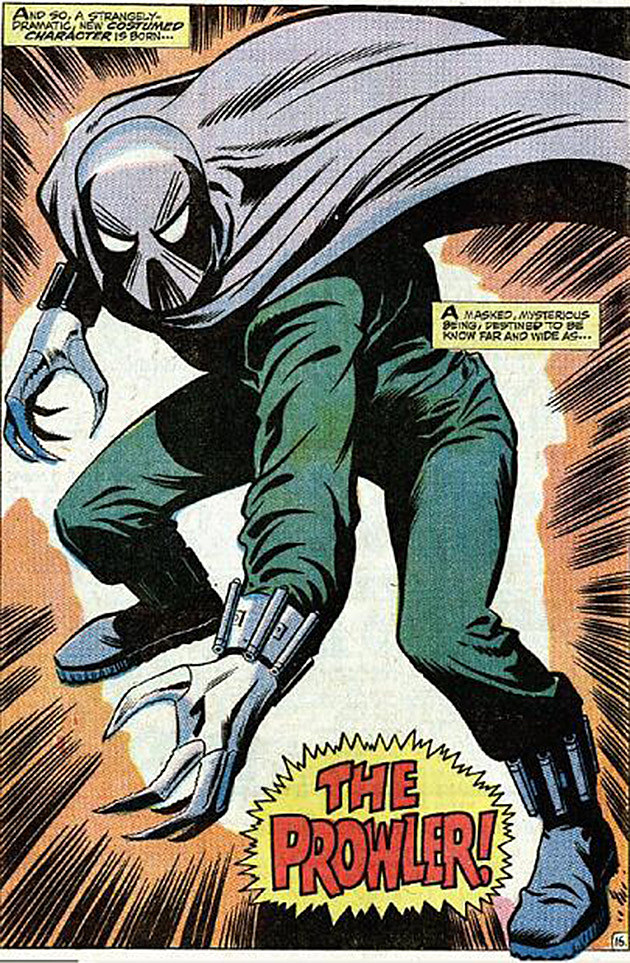 Things worked out really well for Hobie Brown, better known as The Prowler, and his wife, Mindy. Just as she was transferred to North Carolina and promoted up the corporate ladder of TransCorp, Hobie went down with her in search of construction jobs. Just as they moved, the southern boom hit and it wasn’t long before Hobie was running his one company, specializing in pneumatic lifting devices. The couple’s success helped them move up the social ladder as well, and the two worked their way into being a millionaire power couple in Winston-Salem. All the while, Hobie hit the streets as the Prowler … the man protecting the city with his own life while adhering to a strict moral code. As his fortune grew, so has the Prowler’s array of gadgets. He’s got a belt full of crime-fighting and crime-solving equipment. He’s got a secret lair. He’s got a specialized Prowler car that roars through the streets of the city. As the Prowler’s fame grew, so has the hatred of Winston-Salem’s gangs and crime cartels. They’ve even brought in and even created super-powered talent to try to kill him, but he continues to hold on. In fact, through all the mayhem they’ve created, the Prowler has attracted a number of followers who help him. And you can learn more about them at the same Prowler-time and the same Prowler-channel next time …
Notes: Let’s face it, the Prowler looks an awful lot like Batman. Why not just take him a few steps further and make him Marvel’s answer to the Caped Crusader. Even if such an idea doesn’t fly, it only makes sense to see the Prowler head south and find success. Talk about a guy that’s been forever in Spider-Man’s shadow. Even without all the not-to-subtle Batman references, this would work just fine for the P-man.

Making her home at one of the barrier island lighthouses, Namorita keeps one foot in the affairs of the surface world and the other involved in the activities of Atlantis and all the other undersea kingdoms. Serving  more to protect humankind than championing her cousin, Namor, Namorita is often at odds with the Monarch of the Seven Seas. No matter, Namorita happily slips back into her civilian life as the owner and operator of a tourist trap that’s typical of the area. One of the original New Warriors, Namorita has “outgrown” that club and only works with them in times of dire need. As the protector of the outer banks region, Namorita regularly finds herself battling wayward monsters and the occasional vacationing villain — you’d be surprised how often “occassional” is. In her free time, she has taken great efforts to scour the “graveyard of the Atlantic” for all its historical and financial value, making her a sort of expert on such matters — and wealthy too.
Notes: Namorita was always been sort of a forgotten character until she was reborn in the pages of New Warriors. There she actually became more interesting than Namor, but since that title has folded little has been done with her. Like Namor and Aquaman, she suffers from the question: “What do we do with this guy?” My answer is to stick her in a corner and only use her when she’s needed.

Unlike Namorita, The Force has always been, quite decidedly on the side of the
surface dwellers. His first run-in with any superhero was against Namor, and since then the two have never gotten along. That problem has grown even bigger since Force has stationed himself in Fayetteville, the home of a gigantic Army base and Army air field. Though he’s several hours inland and generally avoids Namor’s Norfolk base, the two seem to constantly run into one another and they never end well — with Force usually on the losing side. But still, Force has adopted Fayetteville as his place to keep safe and the good will he has fostered there has meant he is sometimes tapped for work in the military. For example, he’s served in both Iraq and Afghanistan. It’s this work for the military that usually ends with him squaring off against Namor, since the sea king has never been a fan of the American armed forces. Despite his differences with Namor, the Force and Namorita get along fine and often team up. In fact, there’s a rumor going around that Namor better not get wind of …
Notes: The Force has a surprisingly long history in the Marvel Universe, but only ever seems to get used as a third-banana Iron Man or, even worse, a wishy-washy superhero that’s easily influenced.

Has Relocating the Marvel Universe looked at your state yet? Visit the series hub ! 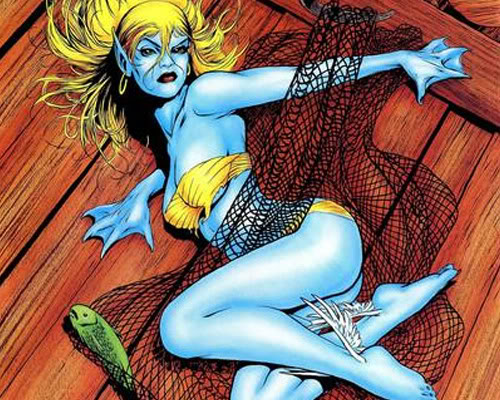