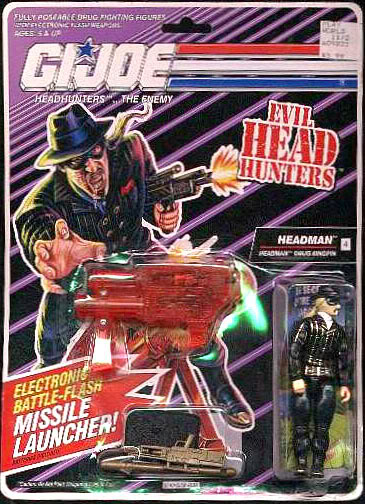 If you follow this blog at all, you’ll know CotB is quite a fan of the G.I. Joe toy line and its associated properties. We collect G.I. Joes. We read G.I. Joe comics, we watch all the cartoons and we love the 2009 “G.I. Joe: Rise of Cobra” movie.

We even have fun making up my own, new G.I. Joe characters (check them out here: Amberjack, Grotto, Foxhunt .. . and more to come!).

But to actually be able to create honest-to-goodness official G.I. Joes — well that must be a crazy-fun job! For the longest time, Joes and their counterparts on Cobra were developed by comic-book writer Larry Hama.

Sure, there’s some great names, and you know them all, Snake Eyes, Cobra Commander, Duke, Lady Jaye, Flint, Shipwreck, Zartan and about 100 more.

We’re not sure if Hama always got to name them — he can certainly take credit for names like Destro and Baroness if he wants, but others just are just plain laughable.

We understand though: It’s probably hard to come with an awe-inspiring code name for the 50th character the company is releasing that year.

The line is an incredibly diverse one too. It covers all terrains, many nationalities and dips heavily into super-science when it needs a little something extra. It’s that diversity that allowed it to keep creating characters by the dozens. Some were recycled from last year’s line, some were shockingly interesting and a few that turned out to be just plain weird.

It’s those weirdo characters we honor today here at Comics on the Brain, as we offer you The 10 Dumbest G.I. Joe Code Names. 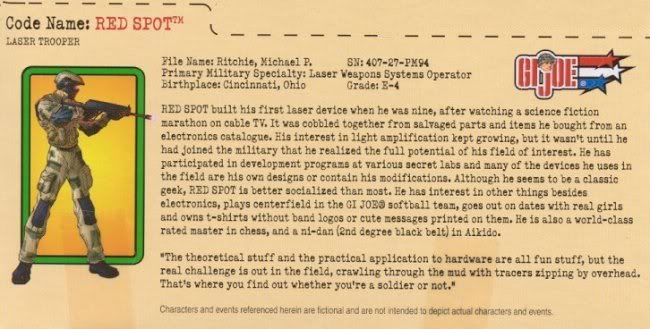 10 — Red Spot (2003): What they wanted you to think — The cool image of red laser spots roving over a target just before a big hit. What you really thought of  — tampon commercials.
http://www.youtube.com/watch?v=cgresCAzJcI

9 — Coldfront (1990): Naming yourself after a weather phenomemon is OK, as long as you pick something like “Hurricane,” “Blizzard” or “Tornado.” But why name yourself after one of the most common weather patterns around? Is it because you bring a bit of sogginess with you into the fight? G.I. Joe’s Coldfront, by the way, doesn’t even have anything to do with weather forecasting per se. Nope, he’s just an arctic patrol tank driver.

8 — Ferret (1988): The file card reads “Ferrets are the backbone of Destro’s armored assault squadrons.” Now if you’ve ever handled a real, live ferret, you’d know that their backbones are more than likely made out of wet spaghetti noodles. With that in mind, is it really wise to try to make a legion of Ferrets the backbone of your army?
While we’re at it, let’s point out that the G.I. Joe universe already had a Ferret of its own. So what happens when a Ferret rides a Ferret? Baby ferrets! 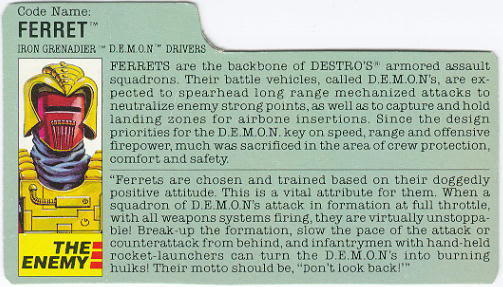 7 — Hot Seat (1993): Years before “Who Wants to be a Millionaire?” G.I. Joe had its own Hot Seat — the guy who drives the impossibly engineered Raider vehicle. His name could have been worse, we suppose — Hot Pants or Hot Box — but Hot Seat is still laughable. Sure, it means the place where tough decisions are made, but what kid is gonna know that? Instead, they’re thinking about that special recliner grandpa needs to help him with his hemorrhoids.

6 — Agent Faces (2003):
Described as a expert mimic in his filecard, whoever came up with Agent Faces knew they had to add the word “Agent” in front of him to give him even just a sliver of bad-assery. And even after that, he just don’t cut it. In fact, his very name calls to mind this scene from the Hunchback of Notre Dame-inspired “Big Man on Campus.”
www.youtube.com/watch?v=aVIChNo84gQ

The character’s name and skill set make it more than apparent that he was modeled after the Dirk Benedict “Face” character on “The A-Team.” That makes him a little cooler, but not cool enough.

5 — Ice Cream Soldier (1994): This one’s a real head-scratcher. What the heck is an ice cream soldier? There’s actually another Ice Cream Soldier in the Sgt. Rock mythos, so there must be some meaning behind the name. We just can’t figure it out. In a bit of toymakers irony, Ice Cream Soldier is one of the Joes’ in their flamethrower battalion. Get it? Ice Cream vs. fire? Oh, they just kill us.
Ice has the distinction by the way, of being one of the ugliest G.I. Joe designs, but that’s another list, isn’t it

4 — Rip It (2000, 2007): Deep in the Hasbro headquarters, a toy designer was tapping his pencil on his desk and brainstorming. “Let’s see, Shredder’s been used by the Turtles. We already got a guy named Ripper — you know, like Jack the Ripper. That’s not bad. What is it that those guys say when they’re riding skate boards? Shredding it or something. But they won’t have a Skateboard Corps …. but I’ll file that idea for later … anyway Ripper. Shredder. I know … RIP IT! … That’s awesome!”
Ten months later, a boy opens up his awesome H.I.S.S. II Christmas present, looks at his new villain and cries, knowing he got the serial farter in the Cobra lineup.

3  — Sea Slug (1987): Imagine this scenario … you’ve worked your way through the Cobra basic training, then further proved yourself in Cobra Eel school.

You’ve battled the likes of Cutter, Shipwreck, Gung Ho and Deep Six. Again and again, you’ve demonstrated you’re one of Cobra’s top deep-sea soldiers and then you get a letter: Congratulations! You’ve been promoted to Sea Slug! Please report to the Department of Sea Slugs to begin your training! Remember, you’re one the few, the proud … the Sea Slugs!”
Yeah, that’s exactly why you joined Cobra isn’t it?

2 — Headman (1992, 2002): Far too many G.I. Joe universe character sound vaguely pornographic, and none sound more pornographic than Headman, Cobra’s CEO in the drug trade. Yeah, it’s true for a short while, the Joes found themselves involved in the War on Drugs, and Headman, who oddly wears a domino mask, was their prime target. A fine endeavor for the Joes to explore, but really he decided to call himself Headman?
Still not realizing the snicker inducing name, they reintroduced him in 2002 with an even more inane paint scheme.
Headman, by the way, is the top photo on this article.

1 — Backblast (1989, 1993, 2004, 2005): Now if you know G.I. Joe at all, you knew that Backblast would be land at the No. 1 spot on this list. What soldier in his right mind would say I want to be named “Backblast.” The very name conjures up images of messy pants after too many tacos. Yet somehow, Hasbro said, “Yeah! Backblast! That’s a great name!” Even more amazing, they actually produced four different versions of Backblast over the years. Aye Carumba!

Now if you’ll excuse me, I’ve got to go release my own version of a backblast. Dang those weight-loss potato chips! 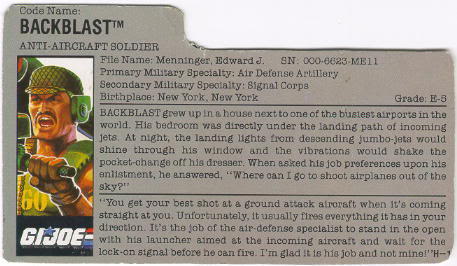 (And a big thanks to the tremendous effort of YOJOE.com for its huge character and vehicle guide!) 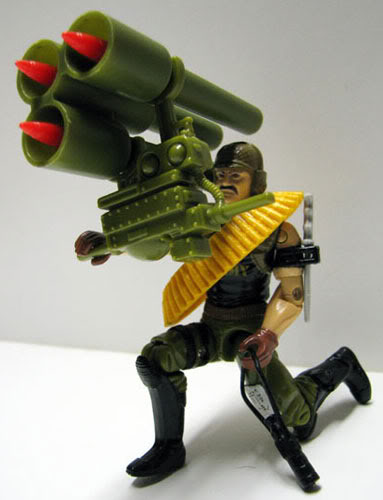