If you remember our exploration of New York, the heroes of the Marvel Universe got scattered around New York City, its auxiliary areas and the far off suburbs. That meant there were now heroes protecting parts of the upstate, New Jersey, Connecticut, Massachusetts, Pennsylvania, Rhode Island, Vermont and Delaware. All these heroes truly serviced the Greater New York City area, even if they weren’t strolling through Times Square on a regular basis.
The same goes for Washington, D.C.
The capitol city of the United States is more than what’s contained in the borders. Virginia, Maryland, Delaware, West Virginia and even Pennsylvania have a substantial amount of commuters who work in the area and live elsewhere.
So, in effect, all those areas add to a network of D.C.-based heroes. The ones we explore in the 34th edition of Relocating the Marvel Universe are those that actually live in D.C.
So, yeah, there’s a ton heroes buzzing in and out of D.C., but here are the ones who call our capitol their home:

S.H.I.E.L.D., the American soldier-spy agency, is headquartered in Washington, D.C., and has field offices in every state. Its presence is particularly noticeable here since the S.H.I.E.L.D. helicarrier is typically anchored directly above the Potomac River and in sight of most of the National Mall.
S.H.I.E.L.D. is run by Nick Fury, it’s executive field agent and primary administrator. Setting up the agency in the D.C. area allows agents direct access to all of the nation’s other federal agencies, such as the FBI, CIA, NSA, Homeland Security and the State Department. With all those agencies already protecting America, what does S.H.I.E.L.D do with itself? It is primarily charged with protecting the government’s interests where superhumans, superweapons, subhumans, mystic forces and aliens are in the mix.
Unlike the Avengers and the Defenders, who also deal with similar threats, S.H.I.E.L.D. and Nick Fury are entirely dedicated to protecting the government’s rights in these matters.
Notes: For me, spy thrillers are kind of silly in an world where superheroes are flying around, and Marvel usually agrees with me. Most of the time, this is exactly what Marvel does with S.H.I.E.L.D. as well. The only difference here is the agency goes to D.C. from NYC. Why? Because I’ve “relocated the Marvel Universe,” and that’s decentralized the threat, so Nick and his crew need to be in a more central location to all of them. 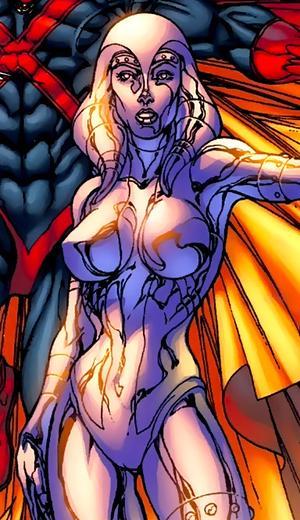 Jocasta, the occasional Avenger, works with a variety of Washington, D.C.,-based (or thereabouts) agencies, such as S.H.I.E.L.D.,  the FBI, CIA, NSA, Homeland Security and the State Department as a hyper-data processor. She also does the same thing for Reed Richards, Hank Pym, Hank McCoy and any other ally who needs it. To do so, she is constantly fed information, such as statistics, surveillance data and astronomical computations, which she “runs in the background” of her regular operations. When she hits on interesting data or solves a particular code or computation, she transmits it along. This work sometimes leads to additional superhero duties for her, so she often travels away from the Capitol.
When none of those leads send her out adventuring, she operates in D.C. almost exclusively in the Washington Metro lobbies, where she serves as one of D.C.’s most popular tourist attractions. She happily does “pictures” with anyone and everyone who asks. In fact, she’s even happy to give out directions and point tourists to the best places to go in the city, based entirely on the constant buzz of information she’s processing.
Notes: Jocasta a glamorized tour guide? Well, kind of. This gives her something to do since she’s awake 24-7. Still, she dedicates almost all her “juice” to solving problems for her allies. Kind of a neat trade-off if you ask me … AND it helps my mandate that says all heroes need to interact with the public, just to give readers some context.

Super-Patriot and Spirit of ’76 are directly charged with one task in Washington, D.C. To protect all  the people, places and artifacts related to U.S. operations. In particular, this means they have a tight patrol area that ends with West Potomac Park on the westside and RFK Stadium on the eastside. This area covers the the White House, the Smithsonian Institution, the Washington Monument, The Capitol Building, the Supreme Court, the Lincoln Memorial and the Library of Congress. It’s a small area, true, but the symbolic portion of this area is intensely important to the nations leader.
In fact, the duo are usually spotted circling the area all hours of the day and night. How’s this, you ask? It’s simple, really, because there’s 10 of each of them. Ten exact duplicates of them, in fact. How’s that, you ask? Well, it’s because all the Super-Patriots and Spirits of 76 are souped-up Life Model Decoys, who’ve been loaded with mild invulnerability and Captain America-level strength. Beyond that, they have been programmed with a wide variety of useful skills and data, including hand-to-hand combat, keen senses, and counter-terrorism and detective/observation utilities.
Since they are LMDs, the have human-like emotions and needs, and those are generally served by maintaining a barracks for the squad and allowing them a semi-normal life — as long as they don’t make any permanent connections with regular humans.
Notes: I racked my brain about the best way to use these guys — both of whom are out of the picture in the current Marvel Universe, and then thought how neat it would be to have them as the primary Washington, D.C., force. Now they’re a few steps above a regular cop, or even a SHIELD agent, and there’s a lot you could do with them from a storyline standpoint too.
Also note that I changed “The Patriot” name into “The Super-Patriot,” since Marvel owns that name (with a hyphen) and there’s already a Patriot in Philadelphia as one of the Young Avengers. 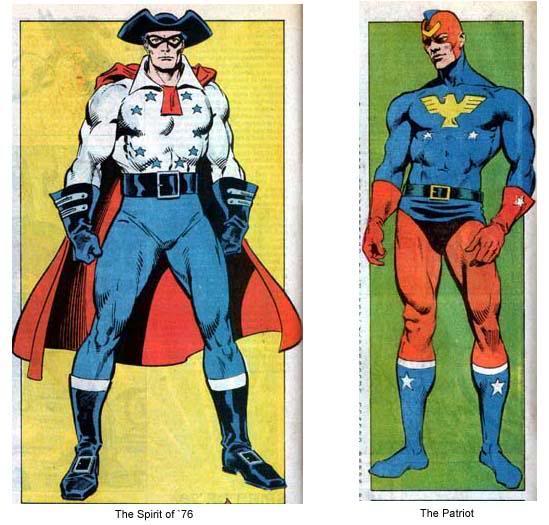 Unlike SHIELD, Jocasta, Spirit of 76 or Super-Patriot, the crime-fighting duo known as Right and Left Winger are entirely unrelated to the government. They are your standard vigilantes, and rather than focus on federal properties, the pair patrols throughout the city, focusing particularly on “the regular folks.” Since they aren’t regulated by the government, not even the city, the two often clash with more official superheroes and minor agencies such as the Secret Service. 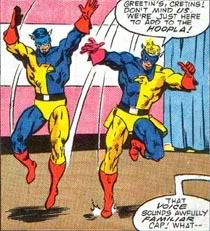 All this antagonism is exactly what they love though. They thoroughly enjoy making waves. They love to be the thorn in someones side. They love to ask the tough questions. They are true independent spirits — even from one another since they often squabble for hours on end about philosophy, economics, politics, football teams and whatever else they can find to argue about. Personal differences aside, they are dedicated to cleaning up their city.
Notes: Last we heard of the Wingers, they were hospitalized and one eventually died. No biggy. They’re extremely minor characters who’ve only appeared a few times, so they’re easy to revive. Their powers? Super strength and invulnerability, and each carried a power sword/torch. They’re such blank slates that they’d be fun to play with, you know?

A being of living data, Modulus, was originally a foe of Reed Richards, his son and the Fantastic Four. After he was initially stopped by the super-scientist, the creature was rendered inert until Richards had a chance to study it again. With a massive amount of reprogramming, a new Modulus emerged.
Now it is essentially a hyper-intelligent robot with lightning reflexes and a malleable plastic body. So, in other words, he’s like a clone of Mr. Fantastic. Unlike Mr. Fantastic, Modulus doesn’t spend 90 percent of its time in the lab and 10 percent of its time adventuring. Instead, it works the D.C. area as a standard stretchy superhero — catching robbers, solving crimes and fighting badguys.
He does this because he’s been programmed that way by Richards, and unknown to most, he can be remotely controlled by Richards whenever he wants. In fact, Modulus is remotely controlled more often than even Richards believes, because his son, Franklin, has hacked Modulus and sometimes operates it with his friends from California.
Someday, that’s probably going to get them in a lot of trouble.
Notes: I’m just a bit of a sucker for these kind of neat-looking characters. Modulus was really intended to be a one-off villain, but why not mold him into something else — an “Avatar” for a pesky genius, his desperate-for-attention son and all his weird friends — which include a motley crew of Moloid and mutant teenagers. Check out Modulus below! 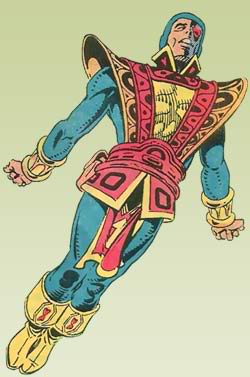 These guys above aren’t all the heroes in D.C. on any given day, simply because of their proximity to the area, a bad guy might encounter:

Has Relocating the Marvel Universe looked at your state yet? Visit the series hub!