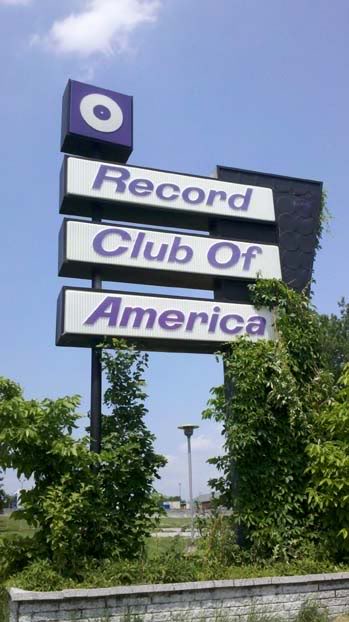 About twelve years ago, I moved to York, Pennsylvania, for a new job. Since I’ve been here, I’ve become quite familiar with the area and was thrilled the one day I drove by an old, mostly unused warehouse operation.

You see, unlike most such operations that have a bland look, this empty building still had its old signage up from its previous incarnation.

The sign, quite proudly boasts that it is (was) the home of the “Record Club of America.” Being a comic book nut, I was familiar with this type of operation since there were often ads for such clubs in the comics and magazines I read. I mostly remember BMG and Columbia House, the two mail-order music clubs active when I was a kid. They had you sign up to get 12 one-penny cassettes or CDs (plus Shipping & Handling) as long as you promised to buy 4 more at regular price (plus shipping & handling).

From the moment I saw the “Record Club of America” sign, I knew it was the same type of operation.

It took another few years before I actually saw a Record Club of America advertisement in a comic. It was in an early 1970s issue of “Fantastic Four.”

In a two-page spread, it offered some great 8-tracks or record albums for 99-cents (plus Shipping & Handling) with no obligation to buy anything else. I guess the company was just hoping you would keep ordering through their catalog rather than buying from a local store.

According to the ad, the Record Club of America is in York, Pa. That’s partially true. Back then, it probably was York, Pa., but as of this writing, it’s now on land on North George Street Extended in Manchester Township in York County.

The building is huge. It has several truck bays and a decent front office set up. Since the property is for sale or rent through Rock Real Estate, you can walk right up to the front door and look inside. The official property listing is here, and that includes a 4-image exterior photo gallery.

The lobby area is decorated (rather sparsely now) with a “tape” and record theme, and a large interior sign also trumpets the company name.

In another set of windows, you can look in and actually see some of their old merchandise — records, 8-track tapes and assorted boxes. These are the real deal too. On the 8-Tracks, you can barely make out lettering. And the rows upon rows of records are all individual albums that have just remained on the shelves since the company shut down.

Inside other windows, you see the remnants of old office furniture and a meeting room.

The building isn’t entirely unoccupied. The actual warehouse area is in-use by another company, so there’s constant activity at the site.

So what happened to the Record Club of America? Here’s what one record enthusiast wrote in 2004:


Record Club of America was based in York,
Pa., and operated from the late ’60s to mid ’70s. It was basically a
discount mail-order record retailer — it wasn’t affiliated with any
label, but offered everything that was in the (late, lamented) Schwann
Record Catalog. If you “joined,” you got circulars in the mail every few
weeks, but there were no monthly selections or cards to send back.

Through the end of the ’60s they were great. Albums that listed for
$4.98 usually sold for $2.99 and often for $2.49 or even $1.99. You’d
sometimes see prices like that on a few sale items at Sears or
Woolworth’s, but this was on a much broader range of albums. The
shipping and handling fees were very cheap, especially compared to the
regular record clubs. At first, these were the exact same pressings
you’d find in record stores.

The “Manufactured by Record Club of America” (press stamp on some records) apparently is what led to
their downfall. After achieving a certain amount of success, the company
started cutting deals with the big labels to buy these custom pressings
so they could get better wholesale prices. The “Manufactured by …”
indicated that the records weren’t returnable to the record label, which
lowered the label’s cost (in those days, regular pressings were 100%
returnable if they didn’t sell — big cost to the label). They’d also
forgo the shrink wrap and maybe use cheaper vinyl to shave the cost some
more. But, if the records didn’t sell, Record Club of America was stuck
with them.

When the club went belly-up in the mid-’70s, it was stuck with about
600,000 albums. For some reason they never disposed of them and just
kept them in a warehouse. Four or five years ago, whoever owned what was
left of the company decided to try to sell these albums to collectors,
often at inflated prices because by the late ’90s, mint pressings of
these ’60s and ’70s LPs were presumably rare. I received a couple of
catalogs from them at that point but didn’t see anything I really wanted
on vinyl — most of the interesting titles could be bought more cheaply
on CD.

I don’t know if there’s anything left of this operation. They did have a
Web site for awhile but I can’t find it now. I do have fond memories of
their early days, though — I bought a lot of LPs from them in the late
’60s.

That is the best description of the company’s rise and fall as I have ever found. There’s not even a wikipedia entry on it.

On a very patient Yahoo! search a few years ago, I did find out that the Record Club of America may very well still exist as a corporate entity. The company name was listed in a campaign donation report for the 2000 presidential election. If I recall correctly, the club gave George W. Bush $500 that year.

While I have never called, I have often wanted to contact its realtor and ask for a tour. Not to rent or buy the facility, but to just walk around and take pictures of this interesting slice of Americana.

If I do, I’ll be sure to update this blog post.

I won’t even charge you Shipping & Handling.

6 Comments on Finding the Record Club of America