When he re-emerged in the world in modern times, the Sub-Mariner showed up in California, where he was rediscovered by the Fantastic Four. Once he “got his bearings straight” he returned to the Atlantic Ocean, and opened up an embassy in Washington, D.C. However the embassy isn’t his primary U.S. residence — that’s more for his political advisers. Instead, Namor opted to keep a close watch on the real risk to his nation: The U.S. Navy. He purchased a large facility in the Norfolk shipyards. Additionally, he maintains an underwater dwelling just inside international waters to the east of Norfolk.
Notes: Dropping Namor in Norfolk makes sense to me. It was either that or Hawaii, but then he isn’t in the Atlantic Ocean, so that was out. Beyond that, Namor pretty much does what he always did before, rail against the system that pollutes and endangers his kingdom.

Barely active as a superhero, Sundragon, who is the cousin to Moondragon, spends most of her on a secluded estate where she ponders her role and the role of the massive power inside her. These meditations can last for days, and where she was once a healthy active woman, she has grown frail and physically weak. Though she can still manifest her dragon energy form, she rarely uses it. Instead, she is considered a psychic healer for the superhero (and supervillain) community. When called upon, she offers her telepathic powers to worm through broken minds and repair them.  (She is also a frequent visitor to Christiansboro, see below).
It’s only on rare occasions that she ventures out into the greater Norfolk-Portsmouth-Newport News area to engage foes in a physical battle. Instead, she often blasts them via remote viewing and renders them immobile until authorities arrive.
Notes: Sundragon is a very minor character within the Defenders/Avengers family of titles. She has oodles of power, but was mostly treated as a throwaway supporting character. This treatment keeps her available but mostly contained and often occupied.

Tabitha Smith, the bubbly girl also known as Boom-Boom , was born in Roanoke, but left before graduating from high school.

Still, her family ties managed to draw her back to the area, especially after her abusive father was jailed and later died there. In Roanoke, she’s actually pretty bored and uses her connections to X-Men and Nextwave, she frequently leaves for extended time periods. This results in glorious homecomings for her, which she just eats up. For Tabitha, being a celebrity is half the fun of the superhero life, so she milks it for all its worth — especially in Roanoke, since residents are eager for “hometown hero makes good” stories. Roanoke is relatively quiet of activity, although she does have what she calls “an infestation” of moloids, lava men and other under-earth dwelling beasts. In fact the majority of the North American Subterreanea exists under the multi-state area of the Mid-South, and includes much of Virginia, West Virginia, Kentucky, Tennessee and Ohio. The persistence in the Roanoke area is soley at the directiion of Mole-Man, who  has developed a crush on Boom-Boom and is trying to get her attention. (Also see the Arizona entry for additional Mole Man activity!)
Notes: I’ve always kind of liked Boom-Boom, but like so many characters she’s not exactly a hot commodity. That and her frequent inconsistent (though often humorous) portrayal makes her a prime candidate for a miniseries of her own. Well, at least in my book she ought to get one. Anyway, tacking Mole Man on to her is more than just a whim. What if she served as a muse to him? Almost the way she did for the Beyonder back in Secret Wars II. What if that was her role in the Marvel U? Hmmm. 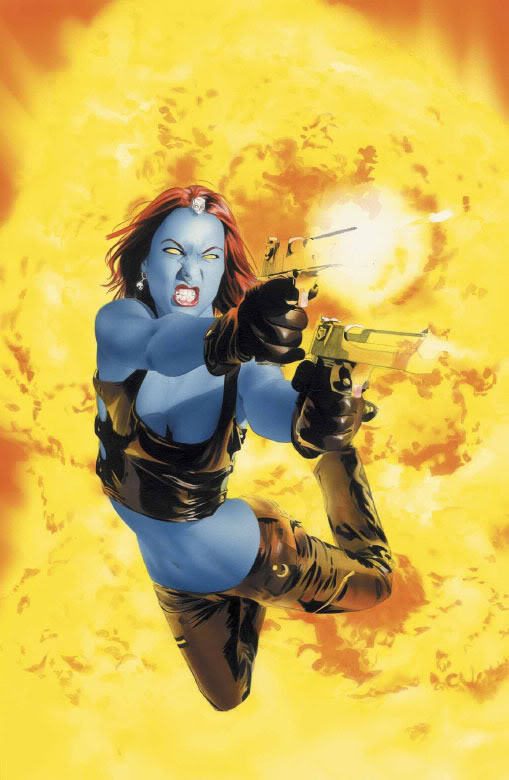 Continuing the ring around Washington, D.C., are the heroes that reside in the Arlington and Fairfax county areas. Man-Wolf, also known as astronaut John Jameson, serves as a security liason for the Department of Defense and all its properties, including the Pentagon. Whenever a super (hero or villain) is inside any of their structures, Jameson is on duty. He often serves as a plain-clothes escort, and transforms into Man-Wolf when needed, often to the surprise of his guests. In such circumstances, his primary goal is subduing the person in question. If that proves impossible, he removes them from the premises.
Notes: This use of Man-Wolf kinda reminds me of how DC uses Captain Atom — he’s the guy that gets stuck keeping heroes in line for the U.S. government. I think Man-Wolkf could do that just fine.

Among the most difficult quarries for Man-Wolf is Mystique, the shape-changing mutant of ever-shifting alliances. At times, the two have worked together, but Man-Wolf has learned that its wiser not to trust her than to do so. Mystique operates in the Washington, D.C., area under a number of aliases. While her heart has never been “for the public good” she often operates as a true vigilante. She metes out justice when she sees injustice, even if no one else will agree with her and she commits a crime (often murder) in the process.
Notes: Ahh, Mystique. Always the slippery one isn’t she?

After her brief career with the New Warriors, the mutant known as Timeslip returned to Virginia. She was temporarily depowered in during the M-Day event, but as a person capable of time-travelling, she simply “replaced herself” with an earlier version and hence has her powers “back.” She now serves as a speedster who patrols the greater Washington, D.C., area, although she’s based in the Fairfax county area.
Notes: It’s pointed out in Timeslip’s Wikipedia entry that she still regularly appears in her superhero costume though she is likely de-powered. Hasn’t anyone made the logical leap that her time-traveling abilities could let her jump into the present and continue work as a superhero?

After earning citizenship in the United States, Cecilia Cardinale, who operates as the hero known as Poison, settled in Richmond after being told to “get out and stay out” of Miami after her frequent efforts to sneak into Cuba and break up the longstanding Communist regime there. She now focuses her energies on assisting the hispanic-American community at large. Often times, that means policing her own people, but her efforts are largely focused on improving communities, rather than beating down troublemakers. With this mission, Cecilia finds she often operates up and down the eastern seaboard rather than focusing exclusively on Richmond or Virginia.  Still, she uses Richmond as a home base, but only “patrols” it in a reactive way. When she hears of trouble she tries to respond, though she’s hardly a frontline fighter and relies on her enhanced strength rather than technique.
Notes: In the regular Marvel Universe, Poison operates exclusively in the Miami area. However, I prefer her in a more “out of the way” city since she’s an extremely minor character in the M.U. Leave Miami to the bigger stars.

If you blink, you’ll drive right through Christiansboro. If you ask the general public they will say its got more boarded up houses than it has people. They will say its future is dim and its past is quaint.
They’ll even say its the home of the devil. 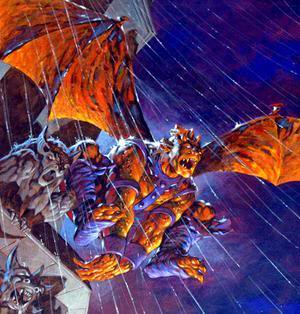 And they’re right.
For years, it was simply the home of a demon-like hero called Gargoyle. Not so much as a home, but more a hiding spot. He would go there to hide. It was his place to sulk and feel bad about the horror he had brought upon himself.
And because of his own mood, the town crumbled.
But then he died. Then he came back to life. Then he fell under the diabolical control of a “friend.” And then he fell in the clutches of a hero-hunter. Gargoyle’s sad life seemed like one pitfall after another, but somewhere along the way, he realized that maybe he was too old in spirit to be a hero. He just wanted to rest, and he went back home.
By this time his town was all but dead. Isaac didn’t mind. He reclaimed his property, bought every scrap of land that bordered it and staked it out as no-man’s land, complete with a 20-foot high brick fence that completely surrounded his newly expanded 3,000-acre property.
Then he began work reviving his family’s “Southern Plantation,” complete with an orchard, cropland, grazing pastures, a lake, smithing shed and a 50-room mansion. Since he doesn’t need to eat, sleep or rest, Gargoyle spends his eternity keeping the place running with a bare minimum of help.
For a year or so, he thrived on his estate. He enjoyed the solitude until a friend came asking for help. He needed a place to recover from a horrible battle, and Isaac welcomed him with open arms.
Soon word got out among the superhero community: The Gargoyle offers a safe haven. And heroes in need of rest, recovery time or just a place to “not feel special,” began to request an opportunity to stay in Christiansboro.
Gargoyle was reluctant at first, but soon he began to appreciate the company and his new role. For the most part it has proven to be successful and peaceful. And when that peace is threatened, Gargoyle savagely defends it.
Notes: Boy do I love Gargoyle. Yep, I know, here’s another one of my favorite Marvel characters. I have a lot. A lot that I see potential in, and Isaac here is just the coolest. I see him as a sullen, sad character who feels he has no place in the world. His fictional hometown, which is more a stoplight  than a town, is just the same. With Isaac being immortal (or practically), he’s the driving force to keep his town alive. But who wants to live next door to a demon? That’s why I figured he’d make an excellent “in hiding” host. Whenever a hero needs to go into seclusion, they call on Isaac.
Has Relocating the Marvel Universe looked at your state yet? Visit the series hub! 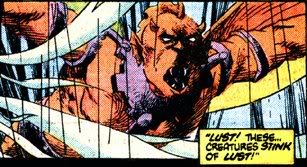