Ever since I saw Bill & Ted’s Excellent Adventure in the movie theater, I’ve been intrigued by Joan of Arc. Yeah, it’s silly to have that movie inspire anything, but since then, I’ve watched every movie I can find about her. The best two are the Ingrid Bergman version and even the Leelee Sobieski TV miniseries is pretty good.
Early this summer, I picked up Mark Twain’s fictional account of the maiden’s life. I’m enjoying it so far, but it has a distinct lack of humor that Twain is associated with. 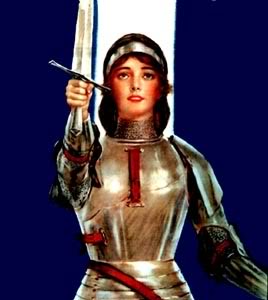 Still, there is one scene that had me rolling. Joan isn’t in this scene, but she’s warmly spoke of by her hometown friends.
In fact, I liked it so much, I wrote it up in script form, in hopes of convincing my one actor friend of trying his hand at making a three or four minute movie on it. (Still a no-go from him, by the way.)
The prime liberty I took with this little snippet is that I dropped one of Joan’s brothers from the scene. Beyond that, it’s about 90 percent what Mark Twain wrote.

>>> The Paladin — An athletic, bombastic fellow who is sure he will marry Joan. He is a paladin in nickname only
>>> Jean — Joan’s brother
>>> Noel — The Paladin’s buddy, whom the Paladin thinks of as a sidekick. Noel just thinks The Paladin is a fun guy, and doesn’t particularly look up to him.
————————

The three are Medieval men-at-arms who are long time friends of Joan of Arc. They have nearly completed a long march through France on their way to see the king. They are just rising after sleeping through the morning in the first safe locale they’ve been through in 10 days.
They are gathered in a tap room and having refreshments.
In the background, the Paladin is working on his own bombastic version of mock swordplay. In combat with an invisible opponent, he’s unstoppable.
————————

NOEL
(pointing to the Paladin):
“I think it is wonderful, the way he has brought us through.”

(The Paladin continues his romp. He’s up on a table fighting three invisible opponents. He “Hiyahs!” frequently.)

JEAN (Quizically):
“What had he to do with it?”

(The Paladin cocks his head to hear better)

NOEL (clutching at his bosom):
“Everything. It was nothing but Joan’s confidence in his discretion that enabled her to keep up her heart.”

(The Paladin approaches the table)

THE PALADIN
(Pounds a fist on the table and ends the speech pointing an accusing finger at Noel): “Now you are getting ready to make a fool of yourself, Noel Rainguesson, and you want to coil some of that long tongue of yours around your neck and stick the end of it in your ear, then you’ll be the less likely to get into trouble.”

JEAN
(Stiffling laughter by sipping up his mead):
“I didn’t know he had more discretion than other people, for discretion argues brains, and he hasn’t any more brains than the rest of us, in my opinion.”

NOEL
(Stands up and circles the Paladin, all the while making graceful motions toward the Paladin’s head and heart)
“No, you are wrong there. Discretion hasn’t anything to do with brains; brains are an obstruction to it, for it does not reason, it feels. Perfect discretion means absence of brains. Discretion is a quality of the heart—solely a quality of the heart; it acts upon us through feeling. We know this because if it were an intellectual quality it would only perceive a danger, for instance, where a danger exists; whereas—”

NOEL
(Making a heart shape with his hands over The Paladin’s chest, he eventually descends into laughter):
“—whereas, it being purely a quality of the heart, and proceeding by feeling, not reason, its reach is correspondingly wider and sublimer, enabling it to perceive and avoid dangers that haven’t any existence at all; as, for instance, that night in the fog, when the Paladin took his horse’s ears for hostile lances and got off and climbed a tree—”

THE PALADIN
(Clearly percieving this as an attack upon his good character):
“It’s a lie! a lie without shadow of foundation, and I call upon you all to beware you give credence to the malicious inventions of this ramshackle slander-mill that has been doing its best to destroy my character for years, and will grind up your own reputations for you next.

THE PALADIN
(Pauses to think up an excuse to get away from the harassment):
“I got off to tighten my saddle-girth.”

(The Paladin walks away as if to leave, but stops.)
THE PALADIN:
“I wish I may die in my tracks if it isn’t so — and whoever wants to believe it can, and whoever don’t can let it alone.”

NOEL
(Making a dismissive gesture to the Paladin as he coddles Jean and eventually sits back down):
“There, that is the way with him, you see; he never can discuss a theme temperately, but always flies off the handle and becomes disagreeable. And you notice his defect of memory. He remembers getting off his horse, but forgets all the rest, even the tree. But that is natural; he would remember getting off the horse because he was so used to doing it. He always did it when there was an alarm and the clash of arms at the front.”

JEAN
(Rhetorically):
“Why did he choose that time for it?”

(The Paladin turns around to face his accusers. His fists balled.)

NOEL:
“I don’t know. To tighten up his girth, he thinks, to climb a tree, I think; I saw him climb nine trees in a single night.”

THE PALADIN:
“You saw nothing of the kind! A person that can lie like that deserves no one’s respect. I ask you all to answer me.”

(The Paladin comes back and looks Jean eye to eye)

THE PALADIN:
“Do you believe what this reptile has said?”

(Jean and Noel descend into laughter.)

NOEL
(shaking a finger at Jean):
“Ah-Ah! Don’t get him started. He is a perfect lion when he gets started. I saw enough to teach me that, after the third skirmish. After it was over I saw him come out of the bushes and attack a dead man single-handed.”

THE PALADIN:
“It is another lie! And I give you fair warning that you are going too far. You will see me attack a live one if you are not careful.”

NOEL
(With mock despair):
“Meaning me, of course. This wounds me more than any number of injurious and unkind speeches could do. In gratitude to one’s benefactor—”

THE PALADIN
(Perplexed):
“Benefactor? What do I owe you, I should like to know?”

NOEL
(with Bravado):
“You owe me your life. I stood between the trees and the foe, and kept hundreds and thousands of the enemy at bay when they were thirsting for your blood. And I did not do it to display my daring. I did it because I loved you and could not live without you.”

THE PALADIN
(An accusing finger toward Noel):
“There — you have said enough! I will not stay here to listen to these infamies. I can endure your lies, but not your love. Keep that corruption for somebody with a stronger stomach than mine.”

(The Paladin leaves, stops squeezes his fists together and returns.)

THE PALADIN:
“And I want to say this, before I go. That you people’s small performances might appear the better and win you the more glory, I hid my own deeds through all the march. I went always to the front, where the fighting was thickest, to be remote from you in order that you might not see and be discouraged by the things I did to the enemy. It was my purpose to keep this a secret in my own breast, but you force me to reveal it. If you ask for my witnesses, yonder they lie, on the road we have come.

THE PALADIN
(Thumping his chest at each point):
“I found that road mud, I paved it with corpses. I found that country sterile, I fertilized it with blood. Time and again I was urged to go to the rear because the command could not proceed on account of my dead. And yet you, you miscreant, accuse me of climbing trees! Pah!”

(The Paladin exits.)
(Noel and Jean exchange a long glance as a smile slowly creeps on their faces. Until they burst into further laughter, clank their mugs together and take a drink.)
——————————————-
More on the book by Mark Twain here: http://theformofmoney.blogharbor.com/blog/_archives/2007/8/24/3182284.html
Read Mark Twain’s book: Personal Recollections of Joan of Arc