For some, it’s just the border between Virginia and Pennsylvania. It’s …

Maryland’s biggest city is the primary home of The Beast, who used to call himself the Beast of Baltimore. After leaving the X-Men and before joining the Avengers, Dr. Hank McCoy worked as a genetics scientist for Johns Hopkins University. Though eternally fascinated with science, he was always equally thrilled by the life of a hero. His constant outings as a superhero wore out the patience of the hospital administrators. Once he had his famous lab accident where he grew blue fur, he was officially asked to leave. Bothered little by the boot, the Beast switched to heroing full-time, particularly focusing on the problems of the inner city. His Baltimore specific focus didn’t last long though, because he was soon snapped up by the Avengers, then the Defenders and then back to the X-Men. He still maintains a residence in Baltimore, but spends less than a month a year in the city. Most of his time now is at the X-Men’s facility in New York.

Filling the void left by the beast is Jack of Hearts. A lonely and sometimes desperate man, Jack Hart seems to hate life. He can’t be close to other humans, yet he is compelled to help them. His powers make him a dangerous man to be around because he can explode like a nuclear bomb if he’s not careful. Most of his days are spent locked in an energy-bleeding isolation chamber.  What’s not to love about life?
But knowing he has the power to change things for the better, he forces himself out of his bouts of depression and serves as protector of Baltimore, and every city nearby including Washington, D.C. to the south and Harrisburg to the north.
His former girlfriend and fellow Contraxian, Marcy Kane, serves as Jack’s doctor and therapist in what has become an odd relationship She also tries to teach him about Contraxian customs and history. But are they a couple? Well, it seems like they ought to be, but its also kind of awkward — like an arranged marriage that neither thinks will be too pleasing. Yet as the only Contraxians on the planet, they are indeed drawn to one another.
As for safety issues, the walking engine of destruction is actually ideally placed along the Eastern Seaboard. If he finds he’s overloading on energy, he can bolt out over the Atlantic and detonate harmlessly — except for the occasional tidal wave he generates.
But that’s just the basics of the story… Do you want to see what his adventures would be like? Then check out my plans for Jack of Hearts. (And here, here and here!) (Heck, I even suggest him as the next big Marvel thing here! … All I can say is “Dammit, Marvel, give me a shot!!”)
Notes: The Beast has always been a busy man, and its not surprising that he’s neglected his hometown. I don’t say that with a bit of malice. He’s been vital to every team he’s been on. He just doesn’t have enough time.
Now as for the Jack of Hearts, he is one of my all-time favorite heroes. Naturally, he gets a favored place in one of America’s coolest cities. I did transport him from his Long Island and Connecticut hangouts to Balto. Once again, he’s the type of character who needs to be moved away from competition in New York City. In Maryland, he can shine as bright as the Contraxian sun!

Sticking with his Navy roots, Comet Man has settled in Annapolis where he maintains a residence at the U.S. Naval Academy and is in near-constant employ by the U.S. Department of Defense, and has been sent on numerous extra-terrestrial missions at the behest of the President of the United States.  His main duty: To work as a courier and diplomat between the U.S. government and extra-terrestrial governments. When those missions have cooled down, he helps maintain orbital security for the nation and its satellite technology in general. On occasion, he accompanies Navy S.E.A.L.S. on covert missions around the globe. And when he’s not busy with any of that, he works as a specialized teacher at the Naval Academy where  he instruct recruits on how to deal withsuperpowered threats.
Notes: Comet Man is one of those weird characters who pops up every once in a while. He seems kind of interesting, but he’s in what appears to be a legal limbo with Marvel and his creators. Or maybe he’s just hasn’t had the chance to be someone’s pet project. Still, he’s loaded with a variety of Superman-like powers, so it’s a shame he isn’t used all that much. 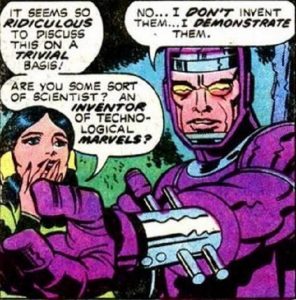 Though he works in conjunction with Washington, D.C.’s heroes, Machine Man tends to stick to the Maryland side of the D.C. suburbs, which is close to his “birthplace,” a now decommissioned robotics lab. When he’s in full operational mood, he monitors all the local media outlets, police and fire bands, and even Internet transmissions. Once he pinpoints something of concern, he activates, makes a beeline to the activity and expunges it. When he finishes his job, he enthusiastically gives interviews, reports his activities to the police and other authorites. He then and returns to the lab and gleefully monitors the increased activity on searches for his name on the Internet and media mentions. That’s just the kind of guy he is.

Notes: Machine Man has changed tremendously over the years. This version of Machine Man is the one who often appears in Nextwave and Ms. Marvel. Machine Man art courtesy of Love and Radiation !

The mutant known as Robin Vega was spotted briefly in Manhattan before disappearing into obscurity. In this case, obscurity is also known as Cumberland, Maryland, a city in the western portion of the state that has more in common with West Virginia than it does with Baltimore and the D.C. suburbs. After earning her degree in metallurgy in NYC, the metal-bodied Vega returned to her hometown of Cumberland where she works in a state-of-the-art government-run metal foundry that processes “the big two” metals in the Marvel Universe — Vibranium and Adamantium. It also houses an omnium foundry.  The foundry is a top secret installation, but it still faces its share of trouble which often spills over into Cumberland and its surrounding communities. Because of that, Vega often goes into action as a super-hero type, though she generally lacks that specific heroic quality. Instead, she just does what’s needed and rarely goes beyond that, preferring to avoid the limelight that superheroing brings.
Notes: Of course this character is an extremely minor one and has only appeared once. She’s also listed as being a mutant so she could have been depowered during the M-Day event. In my MU, she’s still a powered mutant and just choose to keep a low profile. 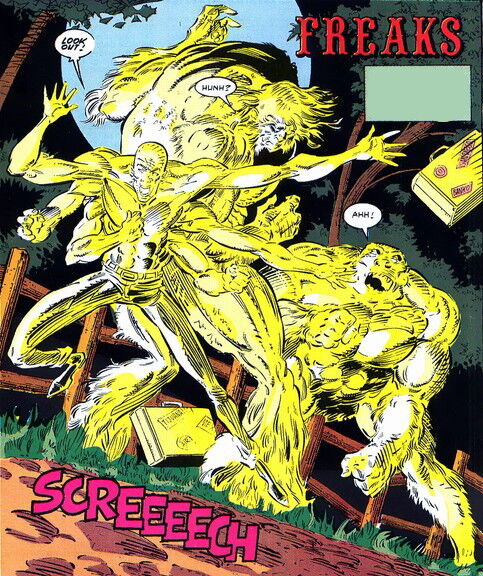 Life in Ocean City can get kind of crazy, especially during the summer. That when The Freaks are most active, splitting their time between running their night club, the Freaky Funhouse, having fun of their own and keeping people from having a little too much fun. Banking on their odd appearances, they wander the boardwalk, pose for pictures with tourists and promote their nightclub, the Freaky Funhouse. During their typical day, they also work as private investigators, specializing in cases in tourist towns. Their night club and their P.I. company, Gorilla Six Investigations, have “offices” in Ocean City, the Bahamas, Myrtle Beach, S.C., Coney Island, N.Y., and Daytona Beach, Fla. They also work extensively with Gomi in nearby Fenwick Island, Del.
Notes: More obscure characters help fill out little niches in cities across the U.S. These guys, are just kind of neat and rarely used, though Gorilla Girl has popped up in Avengers: The Initiative.

Have I tackled your state yet? Take a look at my Relocating the Marvel Universe index!
Need a good explanation of just what I’m doing? Then visit the first entry, which offers a look behind for my initial idea for this series.