Hanging out next to NYC, much of New Jersey gets the “scraps” of what’s left from the Big Apple. So without further adieu, Greetings from … 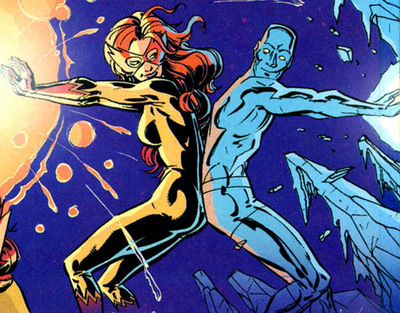 Running hot and cold is what Iceman and Firestar do best, and these mutants are really only partners by accident of geography. Both grew up in Hudson County, N.J., in  the shadow of NYC. In fact, the entire county has its fair share of trouble mostly do to spillover from the Big Apple. Iceman was the first to gain his powers and serves on and off as a member of the X-Men. However, he still makes plenty of appearances across the county. Firestar, who’s about three years younger than Iceman, gained her powers while Iceman was still a full-time X-Man, giving her time to develop her own reputation as a crimefighter.
It wasn’t long before the two ran into one another, and Hudson County was ablaze with love as the two heroes hearts melted for one another. But though they’re both in love with one another, neither is really quite willing to admit it. He’s brash, feisty and a smidge of a lunatic. She’s smart, conservative, a whiz with the media, and amazingly skilled with her powers.
Naturally, the two drive one another nuts in all the right ways.
For a few years, they even shacked up as roommates while they attended Empire State University. Also sharing the apartment was Peter Parker, a nerdy science whiz. Once Iceman and Firestar figured out who Peter Parker really was, the the three heroes formed a short-lived superhero team called the Amazing Friends. By the time college was done, the group officially dissolved, but the three remain close friends, and work together often.
As for Firestar and Iceman, well, they maintain separate living residences and are officially solo heroes, but it only seems to make them more miserable the longer their apart.
Only time will tell if they figure out what they really mean to one another.

Notes: This Jersey City grouping is based after “Spider-Man and his Amazing Friends,” the cartoon show from the 1980s. While the action and plots on this show weren’t all that special, the dialog between the three friends was a hoot, so I revive it here. Pushing past that, I also try to set up Firestar and Iceman in a “Moonlighting”-type love affair. They have sparks. They love each other but they just won’t admit it. 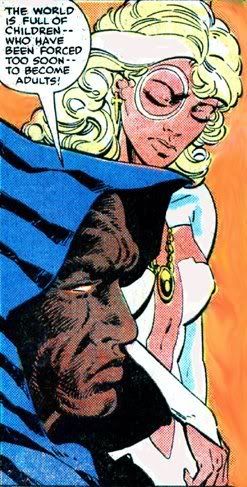 Long a East Coast hotbed of drug smuggling and Maggia influence, Atlantic City was “unoccupied” by superheroes for years until the area was adopted by teenage runaways who would soon be known as Cloak and Dagger.
When Tyrone Johnson of Boston and Tandy Bowen of Ohio each ran away to NYC, they were living on the streets. Offered shelter and food by some strange men, they and nearly two dozen other street children were kidnapped and shipped to Atlantic City where they were subjected to experiments that were testing a new synthetic and highly-addictive narcotic.
While the drug proved deadly for all the other children, Bowen and Johnson survived and found that it actually triggered latent mutant abilities inside them. (No, they aren’t officially mutants, they are mutates because they required a genetic change to trigger their abilities.)
With their newfound powers, they struck out against Atlantic City-based Silvermane  the drug kingpin who heads up Maggia’s drug “division.” They also frequently came to blows with Fenris, a snobbish European brother-sister duo, who found Atlantic City to be an amusing playground.
While they come in regular contact with the superhuman community, the two really try to focus on two things: helping children and teenagers escape abuse and combating the international drug trade. This leads them to leave Atlantic City with regularity, and regularly appear in many other U.S. cities, the New York- and Los Angeles-areas in particular.
Notes: This variation of Cloak and Dagger is pretty close to the regular version and simply transplants them to Atlantic City.

About the only place in a America where a body-part stealing superhero could operate with impunity is Newark, N.J. In a city where crime pretty much runs rampant, the last thing the police are going to start getting upset by is a vigilante. That attitude has let Terror slowly carve his way through Newark’s underworld. While hardly a true superhero, Terror has proved again and again that his devious nature and unique skillset allow him to hold his own against the most difficult of foes.
In Newark, Terror works as a sort of wandering private eye. He doesn’t officially run a detective agency, but rather cases just seem to fall in his lap and he usually ends up “helping the helpless,” rather than those with money or power.
Notes: Terror is one of those characters whose concept is really intriguing, but I’ve never particularly seen it pulled off well. Maybe the most recent Terror series did work, but I haven’t read that.

Making it in the greater metropolitan area of New York City hasn’t been particularly easy for the ex-mutant once known as Chamber. An antisocial guy, Jono Starsmore, has been a member of several superhuman teams — The X-Men, Generation X, The New Warriors, and Weapon X –– and left each time simply because he’d had enough of the politics of teams.
Sullen and often depressed, Chamber moved to the New York City area and lived a hermit-like existence for several years until his powers were stripped away during the M-Day event.
The removal of his powers triggered a new concern for Chamber: Was he being punished for ignoring fate?
That worry lingered long enough that he sought out a new way to acquire powers: Technology.
Using devices similar to Songbird’s yoke and Klaw’s device, he became a sound sculptor, which allowed him to create constructs out of soundwaves.
Using this device, he wanders the Union County area addressing problems as he sees them. Not so much as a hero, but as a helper. Rather than seek out crime to stop, he simply uses his powers to stop accidents, help the needy, clean up messes and even carry groceries for little old ladies.
But please note, he doesn’t do any of this in the grandiose fashion of a superhero. He makes sure that his efforts are anonymous, and he only does these activities from afar. These efforts have generated hundreds of reports of “ghosts” throughout the county.
When he is forced to reveal himself in a superhuman-type activity, he calls himself Decibel, and his appearances in costume have been extremely limited.

Notes:
The tragedy of Chamber has always interested me. At one time, he was considered to be a mutant who could grow into an Omega-level threat and he hated himself. But now that his powers are gone, he’s seen how he should have used what he had to help others.

After numerous run-ins with Spider-Man, Mark Raxton, better known as Molten Man, turned over a new leaf and began working for the good of all, rather than the good of himself. Really, it was only a minor change, but enough for him to slowly earn a reputation as a minor superhero. With his change of heart, he became one of Spider-Man’s closest friends among the super-hero set.
The two have drifted apart since Molten Man began to pursue his scientific interests, which focus on chemistry.  In particular, he uses his nearly invulnerable skin to perform complex experiments under extreme conditions. Naturally, to do such work, he had to find a place that could accommodate his particular skillset — and Hackensack’s Metropolitan University provided just that opportunity.
Molten Man also serves as a security officer for Metropolitan University and its campuses around the world. Met U isn’t just a single campus, but a network of schools across the world, including London, Buenos Aires, Singapore, Tokyo, Johannesburg, Dubai and St. Petersburg. It also maintains about a dozen other one-building labs in other international cities. As Met U’s primary superhuman security officer, he spends a significant amount of his time jetting between the schools.
His worldwide activities make him a popular figure around each of the Met school grounds, and his specialized metabolism has earned him quite a reputation as a partier, even among the superhero community.
Still, this wild reputation is shed whenever anything serious comes down, Molten Man stands strong among the heroes of New Jersey, and anyone he calls friend.
Notes: Molten Man is one of those characters who has had a really varied career, probably because his appearances are so infrequent. I like the idea of him being a reformed villain who still likes to be a little crazy sometimes, but switches gears in an instant.
Metropolitan University is a pastiche and expansion of the idea of Fairleigh Dickinson University, which has multiple campuses in several countries. 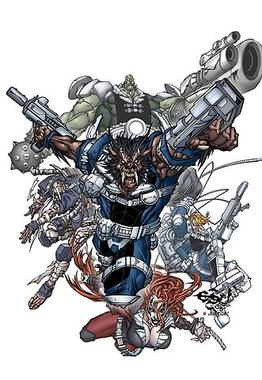 Scraped together by Nick Fury, the Howling Commandos are literally a group of monsters used as a special missions force, including  the Living Mummy (Egypt), Frankenstein’s Monster (Germany)and  Nina Price (Great Britain).
While originally a SHIELD force, the team was released from that duty and re-designated as a United Nations strike force considering that they are made up from a number of international heroes.
Retaining their specially equipped Pine Barrens base, the team has also been active in the New Jersey, Delaware and Pennsylvania area because of this.
Notes: The Howling Commandos are a relatively new supergroup that appears to be mostly forgotten by Marvel. Shifting them to an international team makes sense.