Attached are the minutes of a recent meeting of the Panel on Underwear for Super Heroines (PUSH).

CHAIRMAN: I’d like to call this emergency meeting to order. We’re going to forego the rules of order, and get right down to this. Once again, Spider-Woman isn’t wearing any underwear.
MENENDEZ: Yes, sir. We’ve all got the pictures. It’s … It’s really quite sad. Things popping out all over.
CHAIRMAN: Well, since everyone’s forewarned … Artie, go  ahead and put them up there. 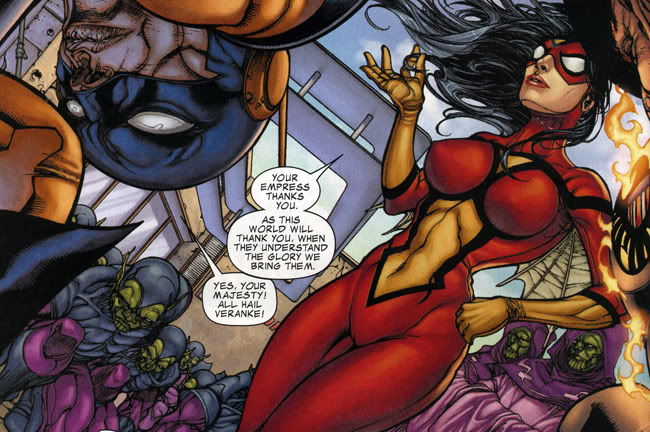 CHAIRMAN: GAH! Not so big, not so big!

ARTIE: Oh, sorry about that sir.
PHILLIPS: It really is fascinating, isn’t it? That .. camel toe of hers.
CHAIRMAN: (Bangs gavel) Phillips! We’re not Page Six here. You know we don’t call it that. It’s her —
PHILLIPS: Spectacular Spider-Toe?
CHAIRMAN: (Bang gavel repeatedly) PHILLIPS! This is not a joking matter!
PHILLIPS: The Friendly Neighborhood Spider-Slot?
CHAIRMAN: (More gavel action) You stop it now!
PHILLIPS: Her web shooter? Her venom blaster?
CHAIRMAN: (Gavel strikes again, and then points menacingly at Phillips) This woman is an icon! A symbol of the Marvel Universe. We do not address her feminine underparts as such!
MENENDEZ: The thing is, sir, we keep sending her underwear. Tops, bottoms. She just won’t wear any. You’ve seen the pictures. I’ve got the receipts. We really did buy them. We really did send them.
CHAIRMAN: (With head in hands) But what’s so hard about slipping them on? You know, before she puts on her uniform?
DETRICK: Well, she has been a skrull all this time. We can certainly blame the last few years on that.
CHAIRMAN: Aw, but the public won’t buy that. To them, she’s just another floozy with a camel toe!
PHILLIPS: Ah, ha! We can say that!
CHAIRMAN: Shut up, Phillips! Don’t say it!
DETRICK: The thing is, sir, it’s not just the lack of underwear. Not really. It’s her costume. It’s just too small. Not since she’s grown — up there, too.
PHILLIPS: Has she ever! It’s like when she came back, she just let those babies loose! I think they actually have hypnotized Ant-Man.
MENENDEZ: Well, Ant-Man is a bit of a sleaze anyway.
CHAIRMAN: Phillips! Menendez! We’re here to talk about the problem. To solve it once and for all, not oggle the woman.
MENENDEZ: (Locks his hands behind his head, stares at the ceiling) Well, back in the 1990s, they would have given her a leather jacket, or even a duster. That would cover up both areas pretty well.
DETRICK: How about a sash? Ms. Marvel has a sash …
CHAIRMAN: That’s it. Keep brainstorming …

DETRICK: Maybe underwear gives her a rash?
PHILLIPS: And a crotch full of red dye No. 40 doesn’t?
MENENDEZ: (Leans back toward the table, watches the slideshow) It is a persistent camel toe, isn’t it?
CHAIRMAN: Not you too? (Bangs gavel) Just stop calling it that! No more, I mean it.
MENENDEZ: Hey Artie. Why so many pictures of her on the stairs? It’s like we’ve got a whole film strip here.
ARTIE: Iron Man’s helmet cam. You wouldn’t believe some of the pictures he’s got stored in there. Moondragon upskirts. Scarlet Witch cleavage shots. Even a few of Captain America in the shower. Creepy stuff. … Never trust a man with a ’70s mustache.
CHAIRMAN: (Clears throat) OK, Artie. That’s enough of that. Lassified-cay!
DETRICK: Does she have a mother? Shouldn’t she have told her about this? That what my mom did.
CHAIRMAN: I think the mother is out of the picture. That’s the way most of these heroes are. Orphans, aliens,  gods-on-Earth, robots, mutants … all screwed up.  I bet a good dose of mothering would solve a lot of their issues.
PHILLIPS: I’d take a hefty dose of mothering from Spider-Woman. All snuggled up —
CHAIRMAN: — Phillips! —
PHILLIPS: — in that heaving bosom —
CHAIRMAN: — PHILLIPS! — Her underwear! How can we get her to wear her underwear? And I’m talking any of it: Boxers, grannies, whitey-tighties. And bras too. We’ve sent her so many. Any of it would work to stop the daily … anatomy lesson.
DETRICK: Yes, and that’s just the first step to make her into a decent, upstanding woman.
PHILLIPS: She certainly gets me upstanding!
DETRICK: Ugh.
CHAIRMAN: PHILLIPS! Shut up!
MENENDEZ: Maybe if she gets her own series again.
CHAIRMAN: She did last 50 issues back then.
DETRICK: But after it was over, she fell hard. Bit player for a few Avengers issues. Wasted in Madripor. Wouldn’t even get back in her costume.
MENENDEZ: That’s probably when the skrulls picked her up.
CHAIRMAN: I don’t know about the series idea. Sure, she’ll play nice for a story-arc or two …
DETRICK: … But once the sales start to slide …
PHILLIPS: (Smacks hands together) Whamm-o! The Crimson Canyon returns.
CHAIRMAN: (Clearly attempting to ignore Phillips) Maybe we can offer her an updated costume …
MENENDEZ: Yeah. We could add some extra padding in the appropriate places. It would also keep every scene from looking so cold.
DETRICK: And if she’s not properly dressed, those things will be at her knees in a few years. We could put some wires along the black piping. For extra support, y’know.
PHILLIPS: I could hold them — “for extra support, y’know.”
CHAIRMAN: Phillips! (Points at him with gavel, grits his teeth and then turns to Menendez and Detrick) But how do we get her on board? She won’t like it. She likes the attention.
MENENDEZ: A new uniform. A new series. That’s a pretty good deal.
DETRICK: Another mini first, with a promise that if it does well — and she sticks to a more wholesome image — that she’ll get an ongoing. Let’s not go overboard.
CHAIRMAN: Right. Make sure she plays ball first.
PHILLIPS: She can play with my ba–
CHAIRMAN: PHILLIPS!!!! (Leaps from his chair, strangles Phillips) 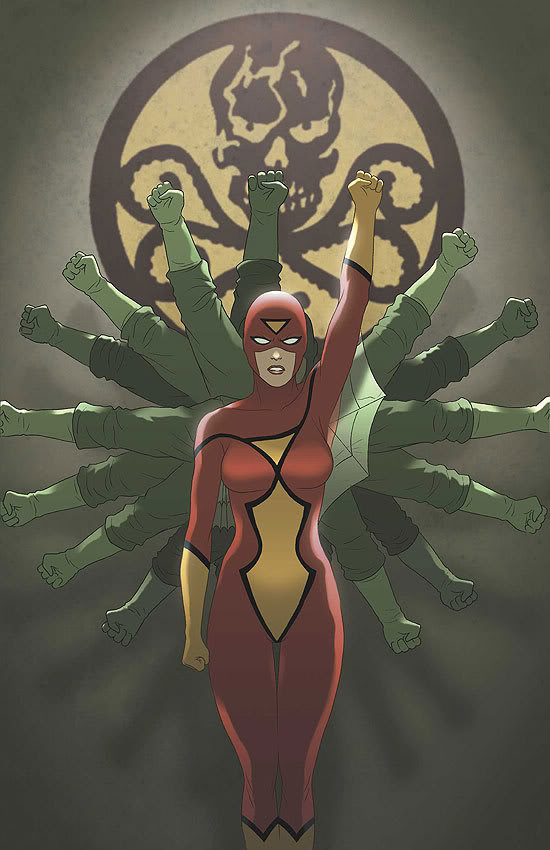