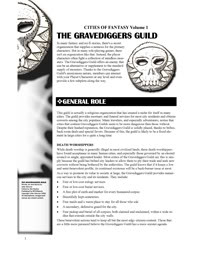 Zip over to RPGObjects.com to pick up my latest supplement for role-playing games, The Gravediggers Guild. This is actually the first in a series I’m doing for fantasy-themed roleplaying games called “Cities of Fantasy.”
The line of supplements will help game masters and players alike as they assemble their fictional RPG world.

If you’re not an RPGObjects customer, you can also buy it over at RPG Now.

Here’s the official promo text for “Cities of Fantasy Volume 1 — The Gravediggers Guild”:

The Gravediggers Guild are a hidden religion in the city. They worship death. They seek the embrace of nothingness. They want to draw every man, woman and child into their fold. Their evil scheme is unfolding right beneath the government’s nose, and only a watchful band of adventurers can stand in their way.

The Gravediggers Guild is Volume One in the new Cities of Fantasy series, a guidebook to help Game Masters flesh out their campaign world and Players develop intriguing backgrounds. GMs get a thorough manual for setting a grand conspiracy in motion. Players will find a multi-layered organization that they can join or oppose depending on their character’s disposition.

Inside, you will find details on …

Cities of Fantasy Volume 1: The Gravediggers’ Guild is framed in 3.5e rules, but rules-free enough (and inexpensive enough) to be suitable for any fantasy role-playing game.

Cities of Fantasy is the result of a long-time effort on my part, and realizing the state of the economy, I’ve assembled it to be ridiculously cheap — it costs even less than a comic book for 15 pages
of material.

As part of my effort to keep costs down, I did all of the artwork myself — from illustrations to layout. And while I love the art for Volume 1, I’m really excited for the look of Volume 2, which includes totally new looks for some popular fantasy races.

You’ll be able to get a peak at some of that in a upcoming post.

Until then, please, give Cities of Fantasy Volume 1: The Gravediggers Guild a try. You’ll dig it!  … Get it? Bwa-ha-ha, I’m so darn funny.