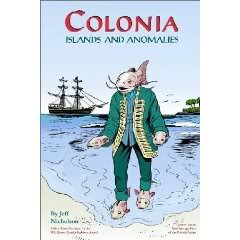 As you’re probably well aware, I’m an avid discount buyer, and I’ve had a remarkable string of good luck lately finding great stuff at slashed prices. I pulled Colonia: Islands and Anomalies Vol. 1 off of my local comic shop’s bargain shelf, and thought the cover looked pretty neat, so I took it home.

Months later, it finally wiggled its way to the top of my “Read Pile,” and I was stunned at just how enjoyable it was.
I’d like to compare Colonia to Jeff Smith’s Bone, but I’ve never read it. Still, I’ve heard plenty about Bone, and think this would strike the same chord with readers.

The story is an “out of place” tale about a young teen and his uncles who’ve been flung into an alternate dimension or timeline where America was never colonized and magic still pops up now and again. Our hero, Jack, and his uncles  wash ashore on a tropical island where weird things just keep happening: ducks talk, soldiers pop off their heads and schools of fish put on clothes.

It sounds more surreal than it is, because the focus is on Jack and how he adapts to the strangeness about him. That is what gives Colonia its charm, and its just slick enough to keep adults and young readers entertained. I’d liken it to “Pirates of the Caribbean meets Chronicles of Narnia.”
With that in mind, I’d  urge some wily corporate buyer to snap this book up and get it on the shelves at Barnes & Noble, Borders and every book store in between. Yep, it’s good fun, and it’s something that could really explode if it was given the right shelf space.

The comic was conceived and constructed by Jeff Nicholson, who’s been nominated for the Will Eisner Comics Industry Award multiple times.
My only complaint? I haven’t been able to find volume two — YET!