One thing that intrigues me about the Big Two comic book companies is the role that merchandising plays. For DC, there are several easy-to-identify key characters: Superman, Batman, Wonder Woman, Robin, Flash, Green Lantern, Hawkman and Captain Marvel. There’s also a few more well-known, if less prominent, characters: Green Arrow, Martian Manhunter, the Atom, Supergirl, Plastic Man and Aquaman. Those characters just roll out of my head in no time flat.

But for Marvel Comics, the list is a little bit harder to come up with, and that’s why I find Marvel’s merchandising machine all the more interesting. Even the company seems to have some difficulty deciding who their key characters are. Sure, you can come up with a few key characters everyone knows, but once you get past that small group the list gets fairly subjective. Most people outside of comic-book fandom would only be able to come up with a short list, namely Spider-Man, the Hulk, Captain America and (maybe) Wolverine. Beyond that, they likely would struggle.

Luckily Marvel is a merchandising powerhouse, so the company is ready to fill in those gaps for the unknowing public. While I was in a store the other day, I came across a set of stickers that offered 16 marvel characters. These stickers were the characters that are supposed to stick in our mind. More importantly, someone in Marvel-Land decided they were the best the company had to offer. The stickers, produced in 2004 by the Sandy Lion Sticker Designs company, had the following characters: Beast, Captain America, Cyclops, Daredevil, Gambit, Hulk, Human Torch, Invisible Woman, Iron Man, Jean Grey, Mr. Fantastic, Spider-Man, Storm, Punisher, Thing and Wolverine.

That’s a pretty good list. It reflects some of the premiere Marvel characters that were in heavy circulation at the time, particularly thanks to major motion pictures. Fantastic Four was a year away. Hulk, X2 and Daredevil were a year old.

But is it the cream of the crop for Marvel? Does that list reflect the best chances that Marvel has for making a buck on its creations? Is it too heavy on mutants? Are all four members of the Fantastic Four all that special? Should there have been more Avengers?

It’s those questions, and a comparison to DC’s list of the “Sweet 16” characters above, that made me come up with my own list of Marvel’s key characters. DC’s “Sweet 16”, except for being a bunch of white guys, really covers the bases. Everyone knows their powers and there aren’t too many duplicates. Sure, Superman and Captain Marvel have the same sort of powers, but Captain Marvel is quite unique with his magic-word activation. And Robin and Batman are about the same, except that Robin is essentially a sidekick, which, to the public at large, is unique in its own right.

So I made up my own “Marvel Sweet 16.” It’s these characters that I’d put on my sheet of stickers.

What was my criteria? Well, I want each character to be memorable, so they ought to have a unique look. Few if any duplicates are allowed. They also should have easy to understand superpowers — there’s no sense trying to explain how Gambit energizes things so they explode to a kid’s mother. I want it simple, real simple.

The demographic they represent is important too. Minorities, women and monsters should be fairly well-represented. As for popularity? Well, that’s not too important. Here in my fictional marketing department, I decide what works and tell editorial to go make it happen.

The COTB Top Picks for Marvel Most Marketable

So whether you agree with me or not, here’s my list of Marvel’s most marketable characters.

1) Ant-Man — Of all the Pym-particle heroes in the Marvel Universe, the Ant-Man persona has always been the best. His powers of shrinking and insect control give him a bit of an ick-factor, but they also make him kind of quirky and fun too. That and he’s got the coolest helmet ever. And while the newest Ant-Man is a bit of a jerk and one heck of a sleeze, all we need is a new guy under the uniform and we’re all set. 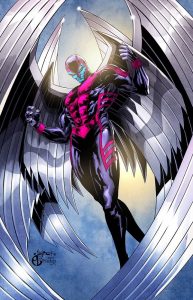 2) Archangel — While this character has little historical significance within the Marvel Universe, when you look at him, you instantly understand what his powers are. This makes him an easy sell. In his blue-skinned Archangel form, kids aren’t going to confuse him with Biblical angels either.

3) Captain America — He’s an obvious choice for promotional purposes. He also is a key figure within the Marvel Universe. His iconic costume and weapon make him easy to recognize and identify.

4) Cyclops — To most X-Men readers, Scott Summers is a pretty boring guy. Heck, look at his supporting-character status in the X-Men films, but you can’t deny that the simplicity of his eye-blasting power and his unique visor make him instantly recognizable. That’s what merchandising is all about, baby.

5) Hulk — Thanks to his media exposure, the Incredible Hulk is another simple one to place on this list. The emerald brute is ingrained in the American subconscious and his strength as a brand is unmatched.

6) Iceman — Though Iceman is often confused for the similar-looking Silver Surfer, Iceman slightly edges out Silver Surfer for placement on the list. Why? Iceman has an easy-to-understand powers. Of course, he and Silver Surfer share the same iconic look, but Surfer’s powers are a bit difficult to wrap your head around.

7) Iron Man — As a merchanidising tool, Iron Man is perfect. He has all sorts of variations. He can change his powers to suit his needs. These character features make toy-designers drool. There’s nothing better than reselling the same toy again and again with only minor variations. Look at the Batman franchise after all.

8) Jack of Hearts — Huh? Jack of Hearts? I gotta be kidding, right? Well, no. Jack has an incredibly unique costume. His powers — he blasts things — are straightforward. As a bonus he even has a fairly compelling back story (hunted by SHIELD because he’s considered a danger). While it hasn’t happened yet, he could be a valuable addition to Marvel’s icons.

9) Machine Man — This robot has something special that most other comic-book robots don’t have — he actually looks like a robot and isn’t trying to hide it. That makes him a little more intriguing than say the Vision or Red Tornado. His powers include “stretching” and fancy-Dan parts that allow him to be ready for anything. Plus, like Iron Man, you could make a million action-fugure variations of him, and that’s something you can take to the bank.

10) Ms. Marvel — Though she’s not well known at all, Ms. Marvel, with her her super-strength and Barbie-doll looks, is prime for merchandising. She’s a simple sell to girls and tough enough that boys don’t mind her much either. On top of that, Marvel is giving her a heck of a push in her own title. She might just make it. (Note: The Ms. Marvel I referred to here is Carol Danvers, who as Captain Marvel has since appeared in her own movie.)

11) Spider-Man — A Spider-Man is a character who is a no-brainer for Marvel’s merchandising machine. He’s got everything. Nuff said.

12) Spider-Woman — While in truth she has little to do with Spider-Man, Spider-Woman certainly benefits from the name recognition. Top that off with a unique look and she’s marketing gold — red and gold, that is.

13) Storm — The mutant Storm has three things going for her: She’s a minority, she’s a woman and she’s fairly well-known. All three make her a decent candidate for being an icon, but it’s her weather-controlkling powers that pushes her through. Once again, they’re easy to understand and easy to remember. It’s these four benefits that edge her above Thor who might be better known, but his Aryan attributes could be more of a detriment than a benefit.

14) The Thing — Thanks to his unique look and the recent “Fantastic Four” movie, the Thing is certainly among Marvel’s best brand-names. His horrific look is also an iconic one, and just different enough — and just loveable enough — to let two strongmen on to the list. 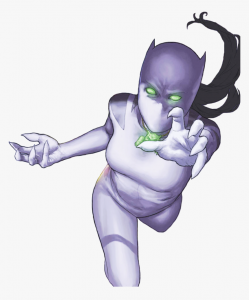 15) White Tiger — While I’m most familiar with the original White Tiger, either he or the current female White Tiger, could be a strong seller for Marvel. First the White Tiger represents a skilled martial artist (with more visual appeal than Iron Fist and Shang Chi), but it also provides some appeal to a Hispanic audience. Sure, he/she is a very small player in the current Marvel Universe, but the White Tiger also is a “street-level” hero that is only represented here by the likes of Spider-Man. She also boots Daredevil off the list, because he’s just another white guy in a costume. Even with a “handicap” Daredevil just doesn’t cut it because his powers make up for being blind. Both White Tiger costumes also have an iconic appeal. Though simple, they are easily recognizable thanks to their glowing-green amulets.

16) Wolverine — As the resident bad-ass of Marvel Comics, he’s one of the company’s most popular characters. This, along with his current media stature, make him an easy one to place on the merchandising list. Even though he sprouts deadly weapons from his hands, he’s still just “tame” enough.

So that’s my list. That’s who I’d try to sell to America and the world.

It was actually tough to narrow it down. It was tough to toss out the likes of Namor, Ghost Rider, Human Torch, Black Panther, Thor and Deathlok. They’re all great characters that serve critical roles, but if I can only have 16, those above are it.