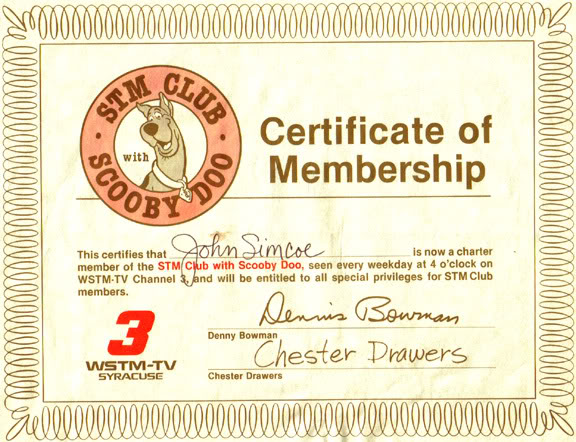 A recent trip to my parents’ house in New York uncovered a treasure trove of old documents and artwork that they had saved for me over the years.

The highlight was my STM Club certificate, which announced my membership in a kids TV show fan club. According to the document, I was entitled me to full membership privileges! And just what were those amazing benefits? Apparently I was allowed to watch a show at 4 o’clock every afternoon and I got a lamenated card with my name on it.

I didn’t watch the show on its original station, Channel 3 out of Syracuse. Instead, I watched it on WETM Channel 18 out of Elmira, N.Y.

I vividly remember the show: It was set on a river showboat and while I watched it featured ventriloquist Denny Bowman and his red-headed wooden friend Chester Drawers.

Later on (or at least later on as I watched it), more characters got added, but they too got whittled down over time. At its low point, it no longer even featured Bowman or Chester.

Primarily — as you can tell from the certificate — the hour-long show featured old Scooby Doo episodes. Later on it featured Scooby Doo movies. I think at one point it also featured an action cartoon, but I don’t know for sure.
I hold this show entirely responsible for my love of Scooby Doo to this day. Sure, before I could watch him once a week and that was good, but with the STM Club, I got him every day.

To this day, I’ll still happily sit down and watch an old episode — or a new one — and thorougly enjoy it.
In particular, I’ve been thoroughly amused by the latest incarnation Shaggy and Scooby Doo Get A Clue as they battle the same evil genius again and again.