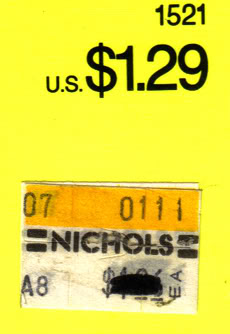 My wife went to a collectibles show over the weekend and came back with some vintage Barbie Doll items. One of them really surprised me when I saw its price tag. No, I wasn’t surprised by how much it cost. Nope. I was surprised to see the tag was from a small department store chain that used to service my hometown: Nichols.
That of course sparked a lot of memories about the store and growing up in rural Western New York. Back then, it was a major weekly event to go shopping. I guess we were far enough out in the country that multiple trips a week was too much of a pain.

The Nichols Department Store in Painted Post was the nearest retailer around Lindley, N.Y., my official hometown. It was typical department store with a dozen or so sections and big enough to easily get lost in if you were smart enough.
The store had departments for clothing, hardware, furniture, toys, electronics, a fabrics area, sporting goods, automotive, books, jewelry, a small cafeteria and a whole row of seven or eight checkout lanes — though only two or three were open at one time.
With that kind of variety, it was always fun to go wandering around in.
Despite my love for the place, Nichols wasn’t that big of a chain. In fact, you can’t even find a Wikipedia entry on it. It was once known as SE Nichols, but by the time I was familiar with it, it had lost the SE portion of the name. Later on it transformed into an outfit called Pharmhouse and then disappeared from the retail landscape forever.

We almost always went in the Hardware department entrance — that’s where dad always had to go, and I remember the most striking thing about that was it had a small, island register directly in front of the door and then to the left was an aisle that housed the store’s selection of lamps. The lamps were always on, and that meant that rather than wait in line with my parents, I was always over there turning them on and off until Dad yelled at me.
Once I was old enough I was given freedom enough to wander through the store on my own. For me, that meant two destinations: Toys and Books.
I have the most vivid memory of the toy department. I grew up in the “Star Wars” age, so I would always go and check out what the latest thing Kenner was offering. There, I would thumb through the selection that was mounted on j-hooks. I didn’t know now that toys come in waves, so some weeks I would be shocked at a batch of new figures, and other times I’d be disappointed that all that was left were C-3P0s and Princess Leias.
My memory of the rest of the toy department has faded, but I’ll always remember that you could find the Star Wars toys on the back side of the second aisle toward the hardware department.
It’s funny the things you remember, isn’t it?

Trips to Nichols were usually a good time because Mom and Dad would usually get me one of two things when we went: A Star Wars figure or a candy bar. They called such purchases my “allowance,” even though there was no monetary figure attached to it. Later, they’d tell me that it wasn’t really an allowance, but they’d buy stuff if they could afford it. When they couldn’t afford an action figure, I’d get a candy bar.
Still, when my parents got shopping, they would really shop, and me, only looking at the books and toys, would get kind of bored after a while and be ready to go home. The problem was convincing my parents to leave because Mom would say “If your Dad is ready we can go,” then I’d go to my Dad and he’d say “If your Mom is ready we can go,” but neither of them would commit to leaving.
Soon, I started going to Dad and say “Mom is ready to go now.” Then I’d scoot across the store to Mom and say “Dad is ready to go.” Then they’d meet, agree it was time to go and we’d check out as I worried that they might catch on to my deception.
In all, I think they only figured it out one time.

Years later, when I entered the job market, the first place I applied was Nichols. I got the job, too. Maybe someday I’ll blog about that experience. It was quite a bit of fun.