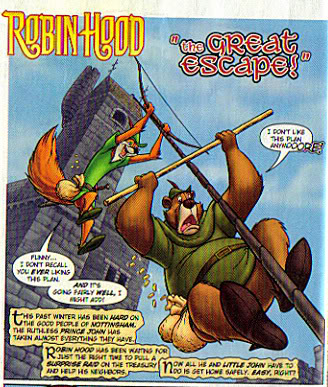 Like so many of those Archies that you spot in the checkout line, Comic Zone is digest sized and full-color. Rather than comic-length adventures (that is more than 20-pages), Comic Zone features a dozen or so one- to six-page features in each quarterly issue.

Each issue is a collection of established characters and new features. In the winter issue, the magazine includes stories of the Pirates of the Carribbean, Chicken Little and The Incredibles. It was another feature, a three-page story featuring Robin Hood — the 1960s animal version– that made me pick up the issue.

While it’s obvious that the magazine is around simply to reinforce the Disney brand in the mind of our little ones, Disney does a good job at presenting entertaining stories for the younger crowd.

And because most of the stories feature Disney’s stock characters, they all follow the studio’s model sheets for the characters. And like we said, Comics on the Brain got it because it featured a the classic Robin Hood characters — complete with rhinoceros guards and bear-themed Little Johns.

In fact, as a kid, CotB was positively enamored with the way the Robin Hood characters were drawn. Li’l CotB even had a special “light board” package where you could trace model sheets and essentially create your own little movie scene. The kit came with images for a bunch of Disney movies, but Robin Hood was the favorite, thanks to it’s medieval setting full of swords and pole arms.

So is Disney Comic Zone any good for adults? Probably not, but your kids are sure to love it — and maybe every once in a while you will too.