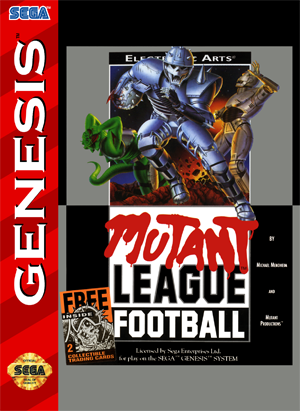 Okay, there is absolutely no way that I can prove this, but let me tell you a story how (I think) I inspired a video game  …

Back when the Sega Genesis video game was first on the scene in the early 1990s, I big part of my cartridge collection comprised of Electronic Arts‘ staple of games.

At the time, the company wasn’t known for its sports games the way they are now. They only had one John Madden video game under their belts. At that point, they didn’t realize they would be building an empire on Madden’s shoulders.  Instead, they were searching and searching for a hit, which let them come out with drek like James Pond, a title that I owned.

In each of those many EA games I purchased during my “Genesis” years was a little “Customer Response Card” wherein they asked the respondant simple biographical data: Age, family income, hobbies, etc.
And on the back of the card? They solicited comments and ideas from the purchaser.

Around the same time I was really into Sega Genesis, I also had a dawning interest in the funky board game called Blood Bowl, which was produced by Games Workshop.

Blood Bowl was a game where two players fielded teams of monsters, elves and skeletons in a game closely resembling American football — except it was much more violent.

With this game in my head, I used the Electronic Arts comment card to suggest that they try to license or copy Blood Bowl.

So, I sent my comment card in around February 1992 (guessing on the year here), shortly after spending some Christmas money on an EA game, and didn’t think a thing about it.

But sometime later I noticed Mutant League Football — by none other than Electronic Arts —  on the store  shelves. The back of the package described the game just as I dreamed it would be:  deadly matches, crazy characters, bombs, bribery and gore on the gridiron. I snatched it up, tried it out … and was pretty much disappointed. What happened? Well,  I didn’t know diddly about football strategy, heck, I could barely even play Blood Bowl, so I couldn’t play the video game version any better.

But it didn’t matter, as far as I was concerned — and as far as I’m still concerned,  I’m the one who gave Electronic Arts the idea for Mutant League Football.

Can I prove it? Nope. Do I care? Only enough to write this blog entry.