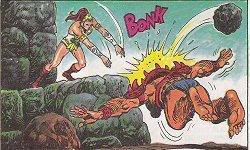 When the Masters of the Universe action figure was in full swing, each action figure also included a mini-comic. These helped shape the He-Man universe and also helped give budding comic writers and artists a place to work (as well as some extra income for veterans too!).

The Story of “The Obelisk”

The Obelisk (of which the above image is taken) summary and review thanks to He-Man.org:
The Obelisk rises from the ground as it has done every year, marked with hieroglyphics on the top. Presumably the good guys have got to it first and used its powers for good all previous years, but now Skeletor wants to gain its secrets. The fight that ensues leads to some really corny dialogue (I mean really corny) and it ends up that a power struggle happens between He-Man and Skeletor, who both gain “ultimate power.” As they utter magic words at the monument, creatures for good or evil appear from the Obelisk. Finally, they both say the words at the exact same time and the creatures and the Obelisk explode, but a voice from the ground says, “The Obelisk will return…”

This mini-comic was created by writer Karen Sargentich and artits Alfredo P. Alcala. 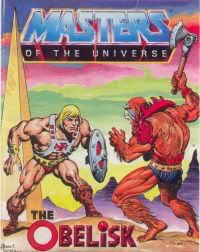 Who is Alfredo Alcala?

Alfredo Alcala was an artist from the Philippines and worked on a wide variety of comics for American publishers. Among his best comics were Conan The Barbarian and Swamp Thing.

Alcala died in 2000, and long-time comic book columnist Mark Evanier did an amazing obituary on him, which you can read here. It’s an fantastic look at a boy who grew up in the shadow of World War II and became an astounding cartoonist who churned out pages — good pages — at an amazing rate.

His work on the MotU minicomics offered images full of action and vibrancy. His characters weren’t the rigid ones you saw on the “He-Man and the Masters of the Universe” cartoon. His pages are truly have a hint of life to them.

Look for more reviews of the other MotU mini-comics here at Comics on the Brain. CotB will talk about their artists, writers and maybe the actual stories too. Stay tuned, and may the Power of Greyskull be yours!