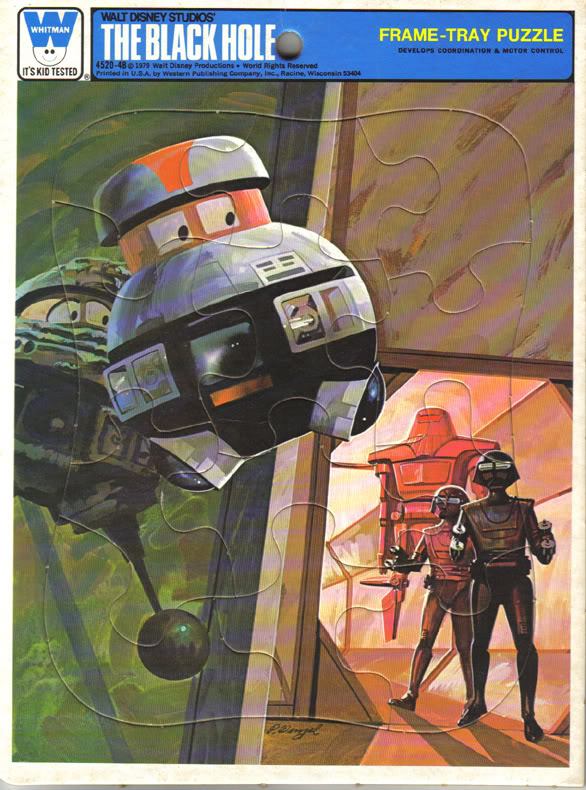 I’m a bit of a nut for yard sales, and through the summer months, the wife, kid and I hit the road every Saturday morning.

The girls are always looking for clothes and other, well, girly things, but not me. I’m always on the hunt for cool toys.

Today’s favorite find (along with a few G.I. Joes, and action figures based on “RoboCop” and “World of Warcraft”) was a simple little puzzle featuring the robot cast members of Disney’s “The Black Hole” from 1979. The puzzle is wonderfully painted and reminds me a lot of pulp magazine art — nice vibrant colors, a sense of impending doom and a slight tilt on the camera angle.

The puzzle was produced by Whitman, a company that was also in the comics business for a while.

There’s a signature on the painting too. It looks like “P. Wenzel,” who is likely Paul Wenzel, a illustrator who also did work on a Lone Ranger kids’ book and a lot of work for Disney.

For example, he’s cited as being the cover illustrator on Disney’s “Haunted Mansion” LP record, too.
Also of interest is his work on “A Wall of Names,” a book talking about the Vietnam War and it’s memorial wall.
One Web site, Mouse Planet says Wenzel “is well known among Disney fans” but I can’t find diddly about him, much less one, Wenzel-specific showcase page.

Oh well, I’ve got my “Black Hole” puzzle, I guess that’s enough to admire his talent!

Note: While doing a bit of research on the puzzle, I found this neat web gallery of a number of jigsaw puzzles, but like I said, nothing Wenzel specific.

1 Comment on Paul Wenzel: An artist lost in a “Black Hole”