In case you haven’t been paying attention, I like Jack of Hearts a lot. A whole lot. Over the years, I’ve tried to work out how I would present a Jack of Hearts ongoing series if I ever had a shot at it. Here’s my pitch:

I see Jack of Hearts as a loner. He feels cursed by his powers. Their explosive nature makes him feel like he’s a danger to everyone around him. He believes he’s under control of his powers, but few believe him. Most heroes he encounters recognize him as a danger and urge him to get help.
This leads him to feel as if he can’t trust anyone. He doesn’t dare to get too close to anyone.
This self-imposed exile makes him depressed. He’s not sure but he might want
to die. This general feeling pushes him to take on dangerous assignments. He’ll take on anybody, no questions asked. He just doesn’t care about his own safety, even if he’s concerned about the well-being of Earth and Contraxia (the planet his mother is from.)
He spends a lot of time on Earth, trying to find a reason to care. Along the way,
he runs into a lot of beautiful and wonderful things, but (just like The Incredible Hulk TV show) he ends up ruining every “paradise” he finds.
He also spends a lot of time dodging government dragnets as they make repeated attempts to capture and contain him.
Jack is particularly keen on helping aliens stuck or living on Earth. This means he comes into conflict with Quasar a lot.
Jack is also eager to keep Earth safe from alien threats, so he’s in space a lot too.
Over time, his exploits attract a group of other heroes/characters. They form a loose band of knight/medieval-based characters who try to uphold a code of respect among one-another. The group sometimes breaks down
into warring factions, but many times they unite against a threat that’s common to Earth.
Jack is also hunted because more than a few people see him as a monstrous power source. His zero-fluid charged body
is a dynamo of “generic” energy that can be utilized for a number of uses.

The plot: He’s been hired by A.I.M. to neutralize Jack so the A.I.M. scientists can
use him as a power source for a weapon. His repeated attempts to capture Jack create a real antagonism between the two, especially, since Unicorn simply tries to beat him to a pulp as a method of capture.

The plot: Taking a cue from A.I.M. this misguided scientist sees Jack as a potential power source to alleviate the world’s dependance onpollution-making  fossil fuels.

The plot: Madcap is a bit of a loon, and likes to test his rapid healing ability (which is better than Wolverine’s). So he baits Jack into incinerating him. When Madcap heals up, he decides that the uptight Jack sure would be fun to harass on a continuing basis. 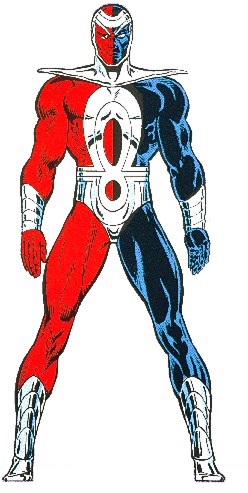 The Plot: Mercurio’s abilities make him nearly invulnerable to anything Jack can do. Also their physical similarities
make them ideal antagonists. They really start hating one another once people start getting them mixed up with one another.

M.S. is just a cool, high powered cosmic butt-kicker. Let me think about this plot!

This guy is a real pig-headed jerk. His powers are very similar to Jack’s. They’re bound to squabble.
The Plot:  Just meeting one anonther is all that’s needed. (From what I can tell, Nitro has appeared in a few of the new Captain Marvel comics as well as sparking the Civil War, so his character may have changed.)

Who joins up with Jack of Hearts in his world-saving endeavours? Other knights, of course!

Jack eventually forms a group of caretakers,  a sort of Knights of the Roundtable. While not entirely good guys, this group promises to work together to combat threats to all of Earth. They include …