BRUSSELS, Belgium — Dr. Buckaroo Banzai got the equivalent of a knightship from the Global Science Society, the scientific union that the original Hong Kong Cavalier had battled with for years.

It is the first time Banzai has won the prize, although rumors have swirled for years that he has been withheld from earlier ballots because of a accusations Banzai made about several members of the nominating team. Those members have since been imprisoned.

The prize, called the Knight of the Sciences Trophy, is awarded once a year to an individual who contributes to the betterment of any science. Banzai, best known for developing the dimension-hopping device, the oscillation overthruster, used his acceptance speech to push for greater funding for science-based college scholarships, rather than hold a grudge against the society.

“Dr. Banzai’s achievement, while sponsored by the United States government, failed to pass our scientific analysis in regard to maintaining a controlled environment during the test,” the committee’s joint statement said at the time.

After a meeting with the nominating committee at the society’s Belgium headquarters in 1985, sources say Banzai fled the city, claiming three of its members, John Deadwreath, John Ceramichorse, and John Nickelback, were in fact creatures called “Lectroids.”

Banzai’s outburst ruined his credibility at the committee for years, all the while Banzai attempted to build a voting block to have Deadwreath, Ceramichorse, Nickelback, and six others removed from the organization.

His struggle within the organization continued for nearly two decades until Deadwreath, Ceramichorse and Nickelback were arrested in Belgium on more than 1,100 burglary charges. Police records say the three were party of a burglary ring that had targeted a Belgian snack-cake factory. 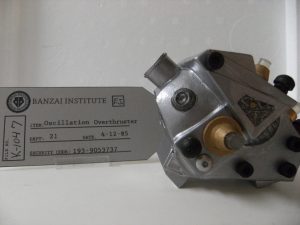 At an news conference after the award ceremony, Banzai expressed his relief that he had finally won the trophy.

“I really didn’t expect to ever win this award. I know my actions within the organization had been questioned by a number of individuals, but believe me, it’s better that those three are now in jail,” Banzai said.

The Knight of Sciences Trophy was awarded to Banzai for his development of a new way to revive once-dead nerve endings on burn victims.

Winners of the trophy are given the title of Knight within the organization. Past American winners have included astronomers Stephen Hawking, Carl Sagan and aviator Charles Lindbergh.

Banzai was accompanied to the awards dinner by Melanie Chisolm, better known as Sporty Spice, who is promoting a new album in Europe.