Go Batty at the Pittsburgh Comicon

In the business of comic books, you can’t get a much better gig than drawing Batman.
Last year at the Pittsburgh Comicon, Batman editor Bob Shreck took a look at an art book by New Jersey-native Tommy Castillo and decided he would be the next artist for Detective Comics, a comic starring Batman.
It’s something that doesn’t happen every day, but it’s one of those things that proves the Pittsburgh Comicon is one of the best comic-book conventions around.
This year, for instance, there’s a trio of Batman artists attending. Along with Castillo, there’s former Batman artists Mike Dedato and Scott McDaniel. 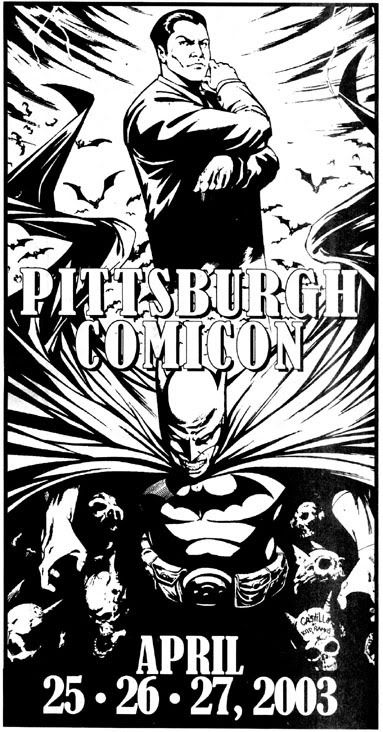 For Castillo, drawing Batman for a living is a dream come true.
“What an incredible experience it is to be part of the 63-year-old history of the Dark Knight,” the self-taught artist said in an e-mail interview. “I mean, fans of all ages come up to me at shows asking for sketches and autographs. It’s an amazing feeling.”
His path to become a bat-artist was a little bit different than most. For Castillo, it started when he was confined to a wheelchair for six months as a youngster.

“I had never drawn before that, but since my high school had no elevator and no wheelchair access to the second floor, I was forced to take all my classes in the art room.” explained the 32-year-old Castillo. “The art became a way to deal with being stuck in the chair and to vent my teenage rage.”
The more common route for comic-book artists is through specialty art schools. But not so for Castillo, who became a free-lance artist after high school and a stint at Brookdale Community College. Over the past 13 years, he’s had a few comics published and done illustrations for role-playing games such as Dungeons & Dragons.
It was that hard work that appeared in his book “Dragons, Myth and Mayhem,” and won him the DETECTIVE COMICS job.
And what would Castillo say to aspiring artists?
“The best advice that you can give any artist is that there is more to the art world than comics,” he said. “You need to diversify. Putting all of your eggs in one basket is not healthy for an artist’s creative survival.”
And for those hoping to make it to a big company like DC Comics?
“Perseverance.”
And after more than a decade of work, that’s just what Castillo had to have to make it.

Cats and clowns and Deep Fried

The Pittsburgh Comicon isn’t just about superheroes, either.
Just take a look at DEEP FRIED, a comic written and drawn by Buffalo, N.Y., native Jason Yungbluth. It has to be one of the funniest comics around.
The comic, which features the off-color humor found in TV shows such as “South Park,” mainly features the exploits of Beepo the clown and Roadkill the cat as they and other characters spout off about various topics, including the Columbine tragedy, 9-11, child abuse, telephone psychics and President George W. Bush’s intellectual capabilities.
Among the other topics “Deep Fried” takes stabs at:

Despite hitting on such often-taboo topics, Yungbluth says he generally gets a good reaction from his work. And with war upon us, he says he’s finding even more inspiration that’s likely to push the edge of the envelope.
“It’s phenomenal,” the 31-year-old Yungbluth said of the current war in Iraq. “This is the greatest boon a comedy writer could have.”
With DEEP FRIED, he also drew on his long-time desire to draw action-oriented comic books with a secondary feature that offers a distorted look at the PEANUTS comic strip. Instead of the friendly neighborhood portrayed in the Snoopy strip, Yungbluth’s post-apocalyptic adventure story features a “Mad Max” version of Charlie Brown who sports a shotgun and cybernetic arm.
The feature proved popular enough that Yungbluth even reprinted the WEAPON BROWN storyline in a paperback collection.
At the convention, he said, he hopes to draw more readers with a animated cartoon display he’s developed for the comic book.
“Any con is a good con,” he said. “Pittsburgh is pretty good size, and I usually make a small profit. I really like the con because it’s a nice, big professional con.”

If comic books aren’t your fare, then don’t worry, because the Pittsburgh Comicon has even more to offer.
Eager attendees are likely to line up for the likes of Erin Gray, the actress who portrayed Col. Wilma Deering in the classic TV show “Buck Rogers in the 25th Century.” Aside from her stint alongside the strapping Gil Gerard, Gray was one of the first Sports Illustrated models and has acted in television shows including the classic 1980s sitcom “Silver Spoons” and more recently “Baywatch” and the soap opera “Port Charles.”
Her table will be one of my first stops at the convention, because I want her to autograph my unopened box of “Buck Rogers” Shrinky Dinks.
Other sci-fi guests include the “Femme Fatales of the Force,” a trio of actresses who have appeared in various Star Wars films.
For horror film fans, there’s even a whole slew of zombie-massacre victims, as several stars of the cult film classic, “Dawn of the Dead,” shamble into the Pittsburgh Expo Mart.
Even better, make-up effects master and Pittsburgh resident Tom Savini is also attending the show. Savini’s finest (and gruesome) work can be seen in films including “From Dusk to Dawn,” “Killing Zoe,” “Monkey Shines,” Stephen King’s “Creepshow” and “Creepshow 2” and the afore-mentioned “Dawn of the Dead.”
Wrestling legend King Kong Bundy, all 446 pounds of him, will also appear as he helps to promote Filsinger Games’ Champions of the Galaxy collectible trading-card game.
Overall, the convention features dozens of other guests, both comic-book and entertainment related, are slated to appear. For a complete list of events, check out the Pittsburgh Comicon Web site.

The 10th Anniversary Pittsburgh Comicon will be held April 25-27 at the Pittsburgh Expomart in Monroeville, Pa., just off the Pennsylvania Turnpike.
The convention opens at 10 a.m. each day. It closes at 7 p.m. April 25, 6 p.m. April 26 and 5 p.m. April 27.
Numerous events are planned each day, including game sessions, charity auctions, panels on a variety of comic-book topics and special contests.
Tickets are $17 per day or $45 for a three-day pass. Children under age 8 are free with paid adult admission.
For more information call (814)467-4116 or visit the Pittsburgh Comicon Web site.

Yes, once again Free Comic Book Day arrives, just one day after the premiere of “X2,” the sequel to the smash-hit “X-Men,” on Saturday, May 3.
Just like last year’s phenomenally successful event, you can stop in at local comic-book stores and pick up a comic book that will cost you nothing.
This year’s selection of comics features a variety of titles, including ULTIMATE X-MEN from Marvel Comics, “Batman Adventures” from DC Comics, and a variety of other comics from other comics publishers such as Image, Archie and CrossGen.