Modern entertainment has roots in pulps

Back in the days just before movies had sound, before radio made it big, and even before the coming of comic books, another entertainment form reigned supreme.

It was known as “the pulps,” which were brought to the masses in the form of pulp magazines.

The pulps were a group of fiction magazines that existed from the early 1900s through the 1950s. They were stocked at newsstands by a wide array of publishers and cost between 10 and 25 cents each. They were called “the pulps” because they were printed on dirt-cheap wood pulp paper.And no, neither has anything to do with orange juice.

The covers of most had stunning and sometimes shocking images meant to spur a quick sale. Some featured a tough-as-nails detective scooping up his faint-hearted, and always beautiful, employer. Others had vivid paintings of the hero about to get bushwhacked. Still others showed readers that, once again, those darn Martians were up to no good.

Inside there was something for everyone. Dad might enjoy the story of a daring soldier. Mom might go for a romance. Sis was likely to swoon over the tale of the brave Canadian Mountie who rescues his girlfriend from a rampaging bear. And little brother? He was a sucker for stories about space aliens.

Now more than 50 years after the last true pulp was spat out of a printing press, collectors are still finding more and more to enjoy. You can sometimes find them at used book stores, antique shops, comic and sci-fi conventions and at book & paper shows.

Will Murray on Pulp Magazines

To understand the appeal of the pulps you have to set yourself back in time, explains pulp historian Will Murray of Massachusetts.

“They were called family magazines because you could buy an issue and pass it around to the whole family,” he said. “In the peak period of time of the pulps, roughly from the late teens to early’40s, a lot of the pulps could be considered the equivalent of a programming block of TV.”

Inside each 7-by-10-inch, 128-page magazine was a world of adventure populated by detectives, super spies, vigilantes, soldiers and cowboys. The magazines featured frankly-written stories where the heroes always beat the villains, scientists invented crazy devices and, as the genre moved away from its family-friendly roots, it wasn’t too uncommon for women to be tied-up and kidnapped.

Sometimes the stories were breathless, exciting and thrilling. Most of the time the stories were as flimsy as the paper they were printed on. But among the hundreds upon hundreds of dreadful stories, some quality material emerged. 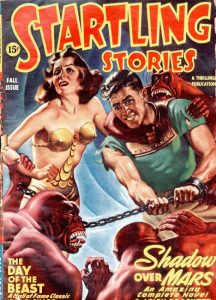 Along the way of all that writing, many of the pulp writers broke new ground by exploring new genres.

“The pulps sort of molded the popular fiction and stories for the rest of the century. Just look at Tarzan, Dr. Kildaire and detectives like Sam Spade,” said Gunnison, who sells pulps and pulp reprints on his Adventure House website.

In fact, pulp historians say almost every modern dramatic genre was first explored in the pulps.

The hit television drama “ER” was likely birthed in the pulps.

Enjoying the new version of “Dragnet” on ABC? It’s probably been done before in some 10-cent magazine from 1937.

Are you wowed by the likes of Batman and Superman? Then you might want to read the Shadow and Doc Savage.

Even the more obscure pulp characters have found new homes. The new CBS drama called “The Hack,” which features a Los Angeles taxi driver who solves crimes, immediately reminded Gunnison of the basic story line of a pulp story collection he compiled in the book “At the Stroke of Midnight.”

“I’ve only seen a few episodes, but you can practically read along,” he said.

Fall of the pulp

Like most mediums, the pulp was essentially killed by a new form of entertainment. The pulps were in their heyday from the 1920s until the 1940s, Gunnison said, but it was “the booming of pop culture” through radio, the movies, television and even comic books that eventually killed off the pulps. 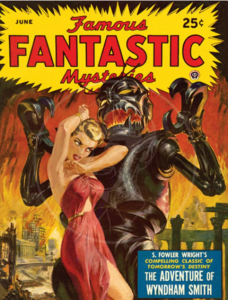 “They died the death of a thousand cuts,” explained Murray, who’s working on a history of the Wild West pulps. The depression was the first serious blow when people couldn’t spare a dime for the pulp. “Then in the late 1930s, radio went coast-to-coast, then comics came along in 1939 and eroded the youth readers, and then Hollywood really took off in the 1940s. They limped along through World War II, but when TV came in ’47, that pretty much killed the pulps.”

Some collectors wanted them solely for their shocking cover art.

“Cover art where what collectors call the ‘Weird Menace’ appeared are really popular,” Gunnison said. “They are the ones where there is some woman in peril who is threatened by a strange evil — like a sinister doctor or a hunched-over gnome — are especially collectible.”

Still both Gunnison and Murray say most collectors just like a good-old fashioned story to read.

The Internet, with its globe-spanning reach, has helped raise the awareness of pulps, Murray said.

“It creates a nexus of interest that has introduced the pulps to a new generation,” he said.

“The Internet creates a focal point. It’s a new trigger of interest in the collectible pulp,” Murray said, adding that original pulps in good condition can fetch more than $100.

Will the pulps ever come back? Murray thinks it’s possible.

“It’s always possible. Someone would have to find a format that works. You’d have to find a way to do a magazine that attracts a wide range of buyers. We’ve become less and less a reading nation, but still the answer is a qualified ‘yes.'”

What are pulp magazines?

Gallery of pulp covers and articles, plus reprints for sale Adventure House