Fairy tales draw us in. Screen writers love them. We love them. Audiences relish the idea of an old classic that’s been reworked with a modern twist. The twist is what makes it exciting. Movie studios always change the story a little bit, and usually that’s enough to fill 90 minutes of screen time. 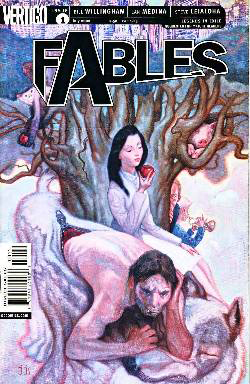 Some of those changes are for the better; others, maybe not. Take Disney’s “Beauty & the Beast,” for example. Readers familiar with the classic French fable know it doesn’t have any talking furniture — but that addition apparently helped the 1991 film get nominated for an Academy Award. In the original fairy tale, there’s nary a narcissistic villain to be seen, but for sheer villainy, it’s hard to beat Disney’s Gaston. A beauty who likes books? That helped give her a little more depth, but the classic doesn’t mention her reading.

Still, fables are ripe with ideas for picking, so it’s not hard to imagine that somewhere in Tinseltown, some writer or director is feverishly pitching the latest update.

“Why not a Gingerbread Man story where the cookie kid is born in one of those mall pretzel stands?” the would-be Spielberg is suggesting. “Or how about a film where Rapunzel was the one who started up all those hair-bands in the 1980s?

“Why not try a cartoon where the 3 Li’l Kittenz are a rap group that’s lost all their ‘mittenz’,” he continues. “What are ‘mittenz?’ Beats me, let the merchandisers figure it out!”

Luckily, Hollywood isn’t the only one to latch on to tales of old and weave them into something completely different. There are also new comics that do a great job of reworking those old childhood staples.

Fables: A mystery of fabled proportions

They’ve been there a long time. Each “fable” lives just short of eternity, and despite the best intentions of an underground fable government, the old tensions are still there. 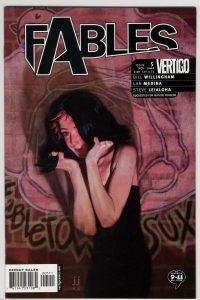 Snow White, Rose Red and Cinderella are romantic victims of the ever-philandering Prince Charming. The sentient animals of the community are terrified of Bigby “Big Bad” Wolf, a sheriff known to blow suspects’ houses down.

For the most part the characters live quietly, until Jack — the tricky fellow who bought the magic beans and whupped more than his share of giants — reports a sinister crime scene. Rose Red, Snow’s little sister who’s become a bit of a wild child, is missing and her blood is spilled from one end of her apartment to the other.

It’s up to the community’s least favorite citizen — Sheriff Wolf — to find out what happened.

The comic mostly follows Sheriff Wolf as he scours the crime scene and interrogates the suspects. The list of suspects includes some of the prominent fable characters. One by one, we learn that everyone has a motive.

There’s Snow White, she serves as chief administrator of the fable community. There’s Prince Charming. He can’t stop wooing the girls.  He counts Snow, Rose and Cindi as his conquests. There’s Bluebeard. He is secretly engaged to Rose. The problem: The community know him for his rather messy break-ups with his many wives. Lastly there is Jack, who discovered the crime scene of the crime. He naturally insists he’s innocent

As that mystery unfolds, we are shown glimpses of how the lives of other characters turned out. Pinnochio, who became a real boy so very long ago, is still waiting to hit puberty. Beauty and the Beast are having marital problems.

One of the three little pigs is sulking around acting very suspicious, and despite being a merry old soul, King Cole wrestles with his duties as the fables’ leader.

I’m not going to tell you what happens when Sheriff Wolf figures out the whodunnit, because you can read the “Rose Red Mystery” in a just-released trade paperback that collects the whole series into in one book, or you can pick up the back issues.

As for the other characters in ”Fables,” time will tell if they get to live happily ever after. 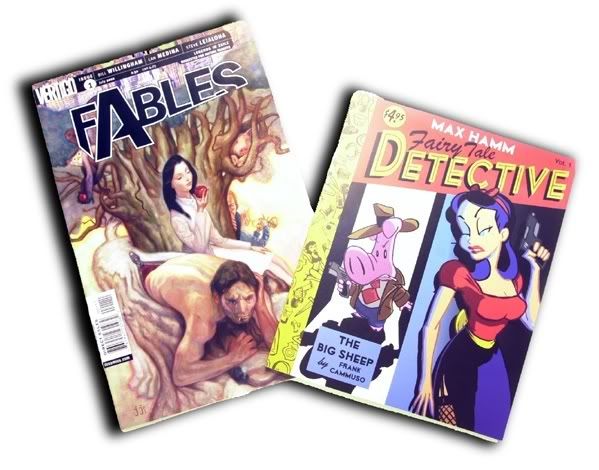 Another detective, another story

For another take on a well-worn theme, consider MAX HAMM: FAIRY TALE DETECTIVE.

In “Hamm,” the pig-sleuth Max Hamm investigates the death of Humpty Dumpty, his partner in the Hamm & Eggs Detective Agency.

“When I got to the joint, there he was, sunny-side-up,” explains Hamm as he investigates the murder scene. “All the King’s horses and all of the King’s men couldn’t put Dumpty together again.”

As he investigates, Hamm builds up a list of suspects. Was it “Little Boy” Blue? Did Mother Goose send Humpty over the edge? Or was it Little Bo Peep, who had come to the detective’s attention as she searched for her lost sheep?

Well, just like the mysteries of FABLES, you’ll just have to read it for yourself.