Blue Beetle never had a chance. He was looking across the gas station parking lot at a living legend — it was Captain America, and Cap had just thrown his indestructible shield. The shield slammed into Beetle, knocking him for a loop.

Across the lot, Hercules picked up a motorcycle and whipped it at the evil scientist, T.O. Morrow.

At the same time, the Flash and Joker ganged-up on the mutant speedster, Quicksilver.

From a comic-book fan’s perspective, none of it made any sense. After all, why would Captain America and Blue Beetle, two heroes who have been around since World War II, fight each other? Why would good-guy Flash team up with the Joker, one of the baddest baddies around? 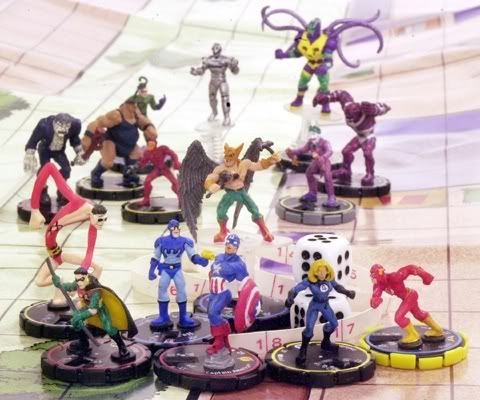 Those bizarre partnerings didn’t take place in a comic book. This was HeroClix, a miniatures wargame where players can see how Marvel Comics’ Spider-Man fares in a battle against DC Comics’ Batman. Or pit Daredevil against the Riddler.

The HeroClix game features a variety of well-known superheroes. With these superheroes, some magic really takes place. Using any combination they want, HeroClix lets players assemble armies from hundreds of available characters. As a result, they can spend an afternoon gleefully demolishing other players’ troops.

It’s many comic-book fans’ dream come true — it’s not every day that the villainous Klaw can be on the same side as the goody-two-shoes Dove.

The approximately one-inch tall figurines are a new gaming concept first introduced in Mage Knight: Rebellion. That game came out in November 2000 and has since sold millions of game pieces for its producer, WizKids.

The popularity of Mage Knight blossomed out into several themed subgames, each carrying the Mage Knight brand name. The company later began producing special dioramas, vehicles and massive, not-so-miniature beasts for the armies.

With Mage Knight a hit with the miniature wargaming crowd, WizKids sought licensing rights to more better-known concepts and the company knew right where to go — comic books. Earlier this year, Marvel HeroClix debuted with heroes from Marvel Comics such as the Hulk, Spider-Man and Captain America. Then this summer, DC HeroClix premiered with figurines of Batman, Superman and others.

HeroVClix and the combat dial

What makes the game unique is the two-piece base, called the “combat dial,” that each figure is mounted on. The outer shell has a “window” that lets players see game-play numbers on the piece hidden within.
These numbers represent the character’s ability to move, attack other characters and defend itself.

Color coding around the numbers indicate each character’s special abilities. The X-Men’s Wolverine, for example, has an in-game ability representing his volatile nature. Similarly, Plastic Man, one of the heroes in the Justice League, has a special color code noting his unpredictable body-stretching ability.

The game also simulates the benefit of working with a team. For example, when Batman and Robin are in adjacent squares on the map, they get additional game abilities.

Miniature game is gaining in popularity

In York, Pa., the various Mage Knight games are flying off store shelves.

His store, as well as Comix Connection in the West Manchester Mall, holds regular events for players around the area to compete for special WizKids prizes, or just for the fun of it.

“You can play with it right away. You just break it open and play,” Dull said. As a volunteer, Dull serves as a rules judge for special tournaments set up by Wizkids. His wife, Deme, is also an avid player and events volunteer.

Both of the Dulls say their favorite WizKids games is MechWarrior, a game inspired by Japanese giant-robot cartoons.

“It’s amazing how complex the rules are for how thin the rulebook is,” Deme Dull said.

With the recent addition of the HeroClix line, the already collectible game became attractive to the comic-book collectibles market, adding another item to the dozens of action figures, posters and T-shirts featuring fans’ favorite characters.

Matthew Dull said on a recent trip to a gaming convention he was approached by a man carrying a large duffel bag filled with hundreds of HeroClix figures.

“He said ‘since I got all of these, I figured I ought to learn how to play,’” Dull said.

Although they are avid gamers, the Dulls aren’t immune to the collecting bug either.

All of the Mage Knight-based games are sold like baseball cards. They come sealed in a pack, and for the most part, you don’t know what you’ve bought until you open it.

There are two standard sets of packs. The best deal is with the big introductory set, which includes 8 figures, dice, a rulebook, a battleground map and a measuring tape to measure distances for movement and ranged combat. It is usually priced less than $20. The other pack is a booster pack containing four figures, and is usually priced less than $8.

For its most popular lines WizKids also creates specialty figures, such as giant Sentinel robots for Marvel HeroClix, and a soon-to-be released special figure for DC HeroClix of Sinestro, an enemy of Green Lantern. Sinestro comes wrapped in a shell of yellow energy molded into a gigantic humanoid shape.

Matthew Dull stresses that HeroClix and the various WizKids games can be played by anyone, even non-comics fans.

“You can start playing with a minimum investment,” he said. “It’s easy to pick up, easy to learn.”

For those of us who do love comics, HeroClix lets us tap into our fascination with our favorite characters. It lets us finally find out if Hero A could beat up Hero B, something most fans have been wondering since first picking up a comic book.

19 Comments on WizKids hits the big time with HeroClix