Mike Hawthorne lives out his dream in comics

Mike Hawthorne is a busy man.

Like most Yorkers, he’s juggling job and family duties.

But unlike most, he doesn’t trudge out to an office or a factory every day. Instead, he goes to the top floor of his York City row house and starts drawing. And he doesn’t stop for eight to 10 hours.

Mike Hawthorne: All I Do is Draw

Hawthorne, a 1993 graduate of William Penn Senior High School in York, Pa., and of Temple University in 1997, is a comic-book artist.

But calling him just a comic-book artist is an understatement. He’s also plays the role of business manager, lawyer, public-relations specialist, writer, prepress technician and father, because when he’s not actually drawing something, he’s busy with one of those other jobs.

When drawing, he sits in his third-floor studio where books, old National Geographic magazines, toy guns, 12-inch-tall action figures, and drawings are scattered around two rooms. Some work is done on his Macintosh computer, but that’s mostly touch-ups for his publisher.

“3 DAYS IN EUROPE is a romantic comedy,” Hawthorne explained. “The basic premise is that there is this couple, named Jack and Jill, who’ve been going out for about three years and their romance is on the rocks.”

As a way to patch things up, Hawthorne continued, both Jack and Jill plan special Valentine’s Day trips for one another without the other’s knowledge. One plans a trip to Great Britain, the other to Paris, and they get so upset with one another that they both jet off on separate vacations.

The story isn’t only about their troubled relationship or a trip to Europe. The action quickly spills over into art thefts, the international tabloid press, cat burglars and rock stars.

Hawthorne’s art style is less superheroes in tights and more like modern illustration, with crisp lines and strong shapes. Anatomical details are kept to a minimum, but action is stressed.

“3 DAYS IN EUROPE is really different for me,” Hawthorne said. “Somebody said my style looks kind of Disneyesque.”

3 DAYS writer, Antony Johnston, who lives just outside of London, was especially happy to pair up with Hawthorne.

“I liked his sense of character, and the dynamic feel much of his art possesses. Then, when he did some character design sketches for 3 DAYS. I just knew we’d found our man,” Johnston said.

“Mike has a great talent for getting over what people are thinking with just a raised eyebrow or tilt of the head — he’s a great communicator.” Johnston explained.

”Also, his ‘comics toolbox’ is extensive – he’s crystal clear, his pacing leads you right across the page, and he knows just how to compose a panel to achieve the best effect.”

Hawthorne is currently working on the third issue of “3 Days.” But that’s not all he’s doing. He’s working on four other projects as well:

“At the time I thought I could do it all by myself,” Hawthorne said. “I was going to do it monthly, but I just ran out of steam. I didn’t have nearly enough time to do what I wanted to do.”

However, despite his initial disappointment with the short run of “Hysteria,” it “was enough to get people’s attention,” he explained, adding that it gave him a resume of sorts to show other people his work. 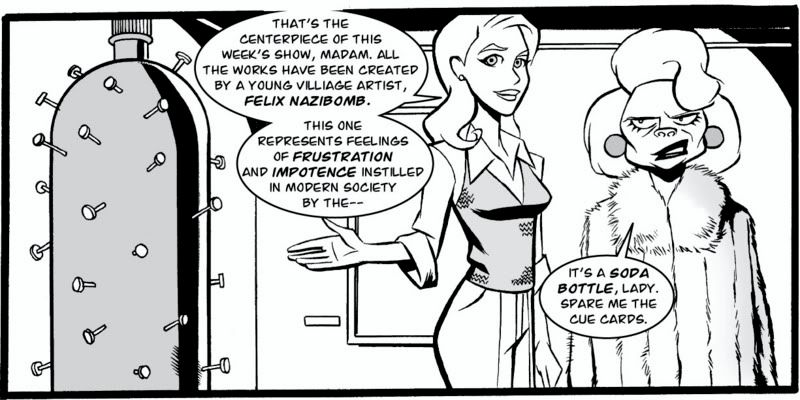 A panel sequence from Three Days in Europe

Now things have changed for Hawthorne. He has a publisher, Oni Press. He has time to draw. He’s even getting noticed by critics, thanks to some early “3 Days in Europe” samples he’s shown on the Internet. He especially enjoys the fact that none of the attention has to do with drawing superheroes.

“I like the books I’m doing, but I always complain that what’s considered ‘mainstream’ in comics is superhero stuff,” Hawthorne said. “Mainstream to me is like ‘Friends,’ or an NBC drama, and those are the kind of books I wanna do — stuff that’s mainstream to the average person. What I mean is that 3 DAYS IN EUROPE is a romantic comedy, UMBRA is a thriller, SPARTA can’t get any more different from Spider-Man if it tried. HYSTERIA is an action-comedy.

“I’m trying to do stuff that I think a lot of people will like. I want a whole cross-section of people to read my stuff, not just comic fans,” he said.

“I decided pretty darn early that I wanted to draw comics,” Hawthorne said. “I’ve been submitting art samples since I was about 14.”

It wasn’t until a few years ago that the 27-year-old was able to sell his art professionally with his “Hysteria” comic. However, he’s the first to acknowledge that going from a fan to a paid artist takes a lot of work.

“It is really hard,” Hawthorne warns anyone who might aspire to be a comic-book artist. “My first bit of advice is to not do comics. Not to completely give up on it, but learn to be a painter, learn to be a designer, because most of these guys have side jobs. Be willing to do something to make a living besides comics. Teach yourself something to make yourself more valuable.

“The second thing I’d say is to get as much information on the making of comics as you can. From prepress to money.”

His third bit of advice: “Once you’re good enough to do comics, obviously send submissions out. Go to conventions and show people your stuff. You gotta be willing to do that.”

Lastly, he says, is to get yourself a good writer and draw an amazing comic book. “That really gets people’s attention, more than anything else,” Hawthorne said.

In the midst of drawing, inking, working on contracts and other tasks, Hawthorne has thought about his future goals.

“I keep getting asked by the guys at the comic stores ‘what book do you want to do?’ They want to know if I want to do stuff like Spider-Man but I really don’t.

“My main goal is to build a library,” Hawthorne said. “I want to be like (comic-book pioneer) Will Eisner, 80 years old with a huge library of books that he’s done, who just sits back and lets the royalties come in. I know that no one book is gonna make a fortune for me, but if I had a hundred books, I’ll do OK.”