Spider-Man swings on to the silver screen

Ack! My Spidey sense is tingling, and it’s telling me that you want to read even more about the most hyped film of the year, SPIDER-MAN. Well, I saw it Friday and thought it was better than CITIZEN KANE.

Yep, I’ll go out on a limb and make that claim, even though I haven’t seen CITIZEN KANE in four or five years. Why was “Spider-Man” better than “CK?” Well, “Spider-Man” has explosions — a lot of them because they’re apparently cheaper by the dozen, and a lot of things blowing up obviously makes a better film. 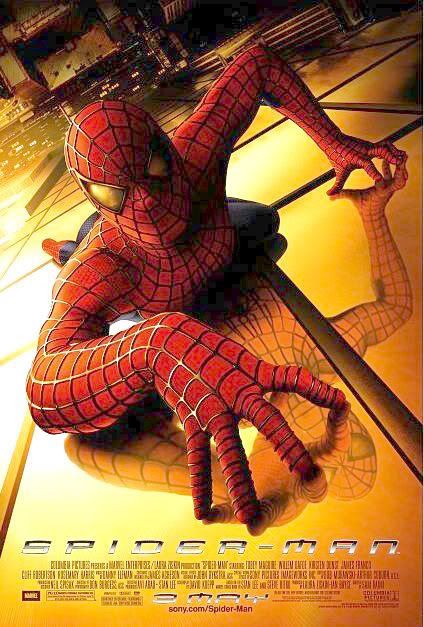 For those looking to increase their knowledge of Spider-Man lore before seeing SPIDER-MAN, keep reading, because I have compiled for you eight Spider-Man factoids. Why eight? Well, spiders have eight legs, so I figured that would be a natural fit.

1) Spidey’s origin: For non-comic-nerds, I guess I have to start at the beginning:

In the comic books, the story goes like this: Timid and bookish high school student Peter Parker was bitten by a radioactive spider while attending a field trip with his class. Instead of making him sick, the venom empowered him with the proportionate strength, agility and keen senses of a spider, which I imagine is much better than the regular strength and agility of a spider. With that, all Peter could do is beat up on houseflies.

Instead of using his newfound abilities for good, Peter goes to a wrestling promoter and signs up to earn big money by throwing some brutes around the ring. As he leaves one such brute-chucking event, he watches as a thug zips by him with a police officer in hot pursuit.
The thug gets away, and the cop browbeats the still-costumed Peter for not helping out.

Like a typical teenage slacker, Peter shrugs it off and returns home to find that his uncle was killed in a burglary attempt by the same thug.
The irony isn’t lost on Peter, who vows to use his superhuman abilities to right wrongs, remembering the wisdom his now-dead uncle gave him: “With great power comes great responsibility.”

That theme pretty much dominates most Spider-Man comic book stories, and is the central theme for the movie too.

2) Spidey’s villains: The Sam Raimi-directed film features the Green Goblin, played by Willem Dafoe, as the main villain, but in the comics, Spidey has squared off against plenty of other foes as well.
There’s the identity changing Chameleon; the tentacled Doctor Octopus; the slippery Sandman; the reality-warping Mysterio; the rampaging goliath called The Rhino; the decrepit Vulture; the big-game hunter Kraven; the devious Kingpin of Crime; and the carnivorous Lizard — to name just a few.

That’s quite a list of people who’d rather see you dead than alive, but no one is out to get Spidey more than Peter Parker’s own employer J. Jonah Jameson, a tabloid-newspaper publisher for whom Peter is a photographer. In the comics, Jameson often waged a war of words against Spider-man, claiming he’s a criminal and a con artist. In the movie, Jameson isn’t any different either, sending out headlines reading “Spider-Man: Hero or menace?” and “Big Apple dreads spider bite!” 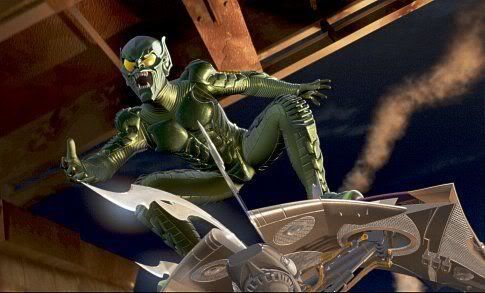 Spider-Man’s most well-known enemy is probably the Green Goblin. The Goblin was played by Willem Dafoe in “Spider-Man.”

3) Spidey’s creators: Writer Stan Lee and artist Steve Ditko were Spider-Man’s creators; he first appeared in AMAZING FANTASY No. 15.
According to Peter Sanderson’s book “Marvel Universe,” Jack Kirby, one of the most influential comic-book artists of all time, was slated to be the artist, but Lee said Kirby’s rendition of Spider-Man was too muscular for a nerdy teenager, so Ditko inked him instead.

4) Spidey’s costumes: Over the years, ol’ Webhead has had a few different costumes, including metallic “Spider Armor.” The most notable of his alternate duds was his nifty “morphing” black costume that turned out to be an alien blob. (Really!)

Spidey got that costume when he was whisked away to another planet to fight in a war, and brought the alien suit back to Earth with him. The costume was goop that could form into any clothing choice Peter wanted. If he wanted a polyester leisure suit, no problem. If he felt like wearing a French maid’s outfit, he’d be up to his ears in lace and frills.
Peter started to suspect that something was strange about the costume when he started growing overly tired from a normal day’s activities (For Spider-Man that means thumping on bad guys, tossing cars around, then going to school and work). So he had it checked out, to find it was an alien symbiote (which to us non-sciency types essentially means “alien parasite”).

Understandably, Spidey tore the alien blob/costume off — which then attached itself to another host, and the two became “one” of Spider-Man’s most gruesome foes, Venom.

5) Spidey’s sarcasm: One of Spider-Man’s least-known attributes is his humor. He’s a master wisecracker, and never was that more apparent to me than in PETER PARKER, THE SPECTACULAR SPIDER-MAN No. 58 (Sept.’81) in which he fought the Ringer, a guy who could create constricting rings out of thin air. It’s a stupid power, and Spidey wasted no time in his verbal assault:

Spider-Man: I’ve fought guys who had mechanical arms, and human lizards, and big dumb lugs who can turn into sand … but really! RINGS?!? (laughs gleefully) 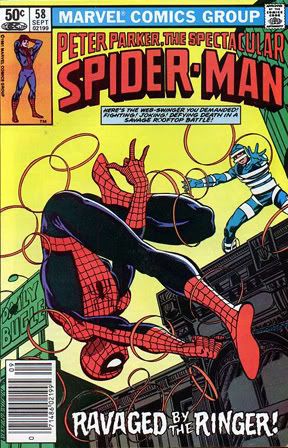 Spectacular Spider-Man No. 58 features a hilarious battle between the wallcrawler and the Ringer.

Ringer: IT’S NOT THAT FUNNY!

Spider-Man: So you say!

Needless to say, Spider-Man easily trounced the Ringer, but not before calling him “Ringo” and “Ring-a-ding.”

6) Spidey’s comics: There are heaps of Spider-Man comics out there. So many, it scares me to think about them. Here are all of the titles I could type in exactly one minute:

The oddest of the bunch for me was “Untold Tales of Spider-Man,” which is an inherently incorrect title. After all, once published, they became told tales.

7) Spidey’s spoof: In the 1980s, Spider-Man was so popular, Marvel comics created its own spoof title, called PETER PORKER, THE SPECTACULAR SPIDER-HAM.

It featured a teenage swine who was infused with the abilities of a spider.

Spider-Ham squared off with the likes of Ducktor Doom (patterned after the Fantastic Four bad guy Dr. Doom) and the Punfisher (who was fish-ified version of the extremist vigilante, The Punisher).

8) Spidey’s future in films: With Tobey Maguire signed for three more Spider flicks, I’d be willing to bet that the villain for the next film will be Doctor Octopus, one of Spidey’s most prominent foes.
The role of Doc Ock would be especially easy to fill, as he’s a 40- to 60-year-old cerebral white guy — and there’s plenty of those to go around in Hollywood.

Me, I’m hoping for a Ringer appearance.

Visit the best Spider site out there, samruby.com