“Gladiator” is a good movie without being a great movie. It’s not that it had any huge flaws in it, it’s just that it never built upon itself. Instead of getting more and more powerful with each battle and each scene of intrigue, the film just resets itself to its previous level. This effort to keep itself in check is what kept the movie from being “great.” 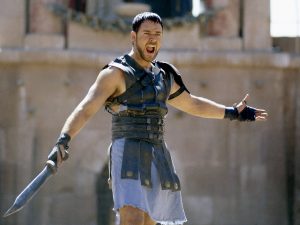 It started with a great battle and, like I said, just cruised along after that. It had no grand climax, just a quiet ending.

The story is intriguing — a tale of treachery, revenge and triumph — though I’m told it was lifted from “The Fall of the Roman Empire.”

And finally one minor criticism: A recent cliche that has surfaced in movies about ancient times is that the villain is always considered sexually deviant. He’s a homosexual. He’s in love with his mother. He wants to sleep with his sister. He’s a sadist.

Why is this? Isn’t killing people in cold blood a good enough reason to be a villain? Why do the writers have to continue their “character development” into the sex thing?