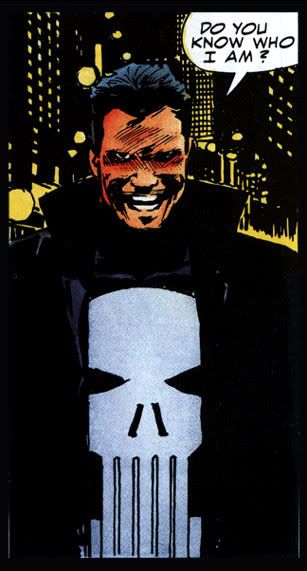 The Punisher has always held a special place for me, but not in my heart.
The Punisher more belongs in a reader’s gut.
He’s just that type of character. One that’s intense and raw. Frank Castle is more a mood than a human being.
I first read about The Punisher when he appeared in an issue of Peter Parker — The Spectacular Spider-man with Cloak and Dagger. In it he was on a mission — his everlasting mission — to destroy all those who broke the law.
At the time, he was so wrapped up in his mission that he was killing every lawbreaker he came across.
Litterer. Traffic-light runner. You. Me.
The Punisher was a madman and I was just blown away by him (well, figuratively).
But Frank Castle wasn’t like most other comic-book madmen. He wasn’t the Joker or the Green Goblin or Darkseid. He had something else.
He had motivation — in excess.
That’s what helped
The Punisher cross-over from villain to hero, if you could really call him that.
His motivation: Frank Castle say his family killed in cold blood.
Do you understand that? He saw them die.
And they didn’t die from a disease or a car wreck. They died to cover up a crime. They died for money. They died for a lifestyle.

Their murder was the end of Frank Castle, too. He’d relive that day many times afterwards, but he’d never truly live again.
That’s when The Punisher was born. Frank Castle became a madman. Even worse, he became a madman with a mission — to destroy all crime, no matter what the cost.
By the early 1980s, he began to surface again and again in the Marvel Universe. First in Spider-man, then in Daredevil and then in his first limited series by Steven Grant and then there was his first entry into the Marvel Universe handbook of characters.
There he was, in a determined, angry pose with his pistol drawn. The secondary picture was more of the same. It was The Punisher dashing head-first into action.
I don’t know who drew those entries, but I loved them. I pulled that page from my issue of Marvel Universe and I still have it to this day. The page is old and yellowed. It has tears in it. But I saved it. I saved the anger.

It was that first limited series that set the ball rolling for The Punisher. He became a hot property for Marvel. He even got his own solo comic, even before Wolverine.
Mike Baron and Klaus Jansen deserve a lot of credit for that success. The first few issues of his ongoing series went off like an explosion in the comic book world.
Everybody wanted The Punisher.
Everybody needed The Punisher.
The Punisher, like Rambo, several Arnold Schwarzenegger films and the Die Hard movies, was America’s innoculation to its growing amount violence.

They solved violence with violence. It doesn’t make sense, but then again, somehow, it does.
Like The Punisher’s own tactics, America’s needs somehow matched the problems. America wanted to end its violence, so its culture got more violent. The Punisher wanted to end crime, so he killed criminals.
America had its war on drugs. The Punisher had a war on crime. Violence begat violence. An eye was given for an eye. A tooth for a tooth.
The first cover always had me mesmerized. The Punisher, dangling from a fire escape taking aim with a rocket launcher at the inside of a seedy apartment. It kind of captured the essence of The Punisher. He’d go anywhere and do anything he neded to fight his war.
That war also brought him in conflict with the law. He’s been in prison. He’s been in the courts.
One of my favorite issues of The Punisher included a wrap-around cover of his wanted poster. I have that poster framed in my home.
“Consider suspect armed and EXTREMELY DANGEROUS,” the poster says. “WANTED DEAD OR ALIVE,” it practically screams. “Has gunshot, knife and grenade scars distributed over majority of his body,” it says.
That’s a pretty hefty price to pay for a grudge.

The Punisher recorded his mission too. His war journals would be a tantalizing read if any reporter ever stumbled on it. The journal probably helped deepen his madness and his mission. It allowed him to think about his war even when he wasn’t out fighting it. His war journal was a way for him to never relax, to never decompress. It kept him on the edge of self-induced insanity. 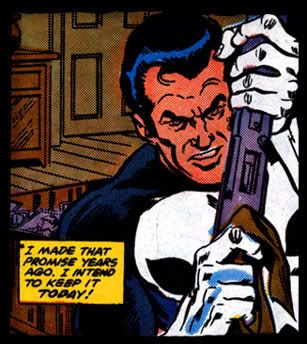 I often wondered what The Punisher really thought of himself, beyond his bravado of fighting a war. He was a murderer after all. He was his own Catch-22. He did wrong to stop another wrong. He killed to kill a killer.
That was the heart of many critics’ arguments against The Punisher. His type of solution wasn’t a nice one. He murdered people out of revenge for a long ago injustice. Many people to this day point to Punisher comics as sort of a loss of innocence for the
entire industry.
It was right around that time when many comic-book vigilanties (which is to say superheroes) became more like real-life vigilantes. You know the ones who beat a suspected rapist to death or try to “take their neighborhood back” by any means possible.
Those people aren’t heroes and neither is The Punisher.
Frank Castle isn’t about heroism, valor or bravery. Frank Castle is about anger, revenge and bitterness.
He’s the embodiment of an emotion lingering your gut. An emptiness in your soul — one that hangs with you for days, months and years.
The Punisher is no hero. He never could be, not in a million years.
The Punisher is a madman.