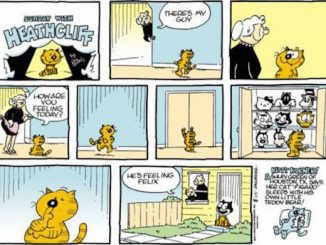 To determine the Daily Weirdness Level of a Heathcliff comic, please note the elements in the comic, consult the chart below and make a sum […]

Over at the fancy new Captain Comics Web site, the group is having an interesting discussion on using comics as an educational tool.To kick start […]

Sunday was a strange day for me. My youngster and I spent hours watching “Teen Wolf” in all its incarnations. Well, we watched everything available in […]

Originally published at the York Dispatch BlogZone at the Pop Quiz, Hotshot! blog There’s something to be said about a church that offers up great […]

Originally posted on February 2, 2007 There’s something to be said about a church that offers up great old movies for the public. That’s just […]

This weekend, the wife and I decided to play a  board game rather than watch another hour of television. She picked an old retro standby […]