The most-neglected aspect of the G.I. Joe universe is the part of the military that focuses on naval warfare. It makes sense, too. From a toy-development standpoint, you simply can’t create a toy boat big enough to really portray the colossal size of a real naval ship. 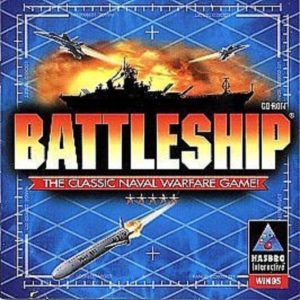 Sure, there was the U.S.S. Flagg playset, but that’s all it was — a playset. Other boats only had enough for one or two action figures. The grandest of them all was the Whale hoverboat, and it is a massive piece of plastic fit a few more.

In total, there were maybe a dozen boats and watercraft available for the Real American Hero line. Of those, only a few of them floated. And really, the best part about having a boat toy is that it would float. With a floating boat toy, you could have a great time in the pool, at a creek, the beach or lake.

With a U.S.S. Flagg playset, you could have fun in … the basement. Now that’s not to say that the Flagg wasn’t great. It just wasn’t a great toy boat.

Battleship Arrives in the Hasbro Universe

That all brings Comics on the Brain to another key realization — That G.I. Joe should just dump any attempts at being a combination of all the armed forces. It should stick to the Army, Air Force and Marines. Sure, G.I. Joe can keep its specialists like Cutter, Deep Six, Torpedo and the rest of the pre-established characters. But that’s it. Instead, from here on out,  G.I. Joe will need to call in the big guns. That’s right — When G.I. Joe needs Naval support’ll need to ask for help.

That’s where the Battleship Fleet comes in. The aircraft carrier. The Battleship. The Cruiser. The Submarine. The Destroyer. They’re all ready to help G.I. Joe at a moment’s notice

Yes, this takes a cue from the 2012 film “Battleship.” This fleet would be a high-tech division of the Navy that’s ready to battle Cobra, VENOM, aliens, Godzilla or whatever else threatens ocean security.

G.I. Joe’s Flagg? Well, maybe the Flagg is Battleship’s aircraft carrier. After all, it’s hard to suggest that a crew of thousands all belong to G.I. Joe. Its presence makes it hard to make a case for G.I. Joe being elite.

This idea of integrating the franchise is, by no means, a novel concept. Even the movie’s timing suggested this since it was sandwiched between G.I. Joe and Transformer flicks.

So, really we’re not suggesting some groundbreaking idea. Hasbro is already working on merging its boy-toy concepts by placing Transformers, ROM, G.I. Joe, Micronauts and MASK in one universe. We’re just suggesting they make a little more room and throw a Battleship team into the mix as well. 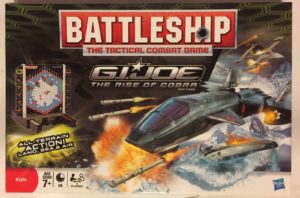 When the Battleship Fleet Arrives …

There could be one problem with the idea. People who don’t think about the idea would say that “Transformers, ROM, G.I. Joe, Micronauts and MASK are all about characters and Battleship isn’t.”
To that CotB would say maybe it doesn’t need to be about characters. Instead of making a boat captain, gunners and mechanics, just make Battleship more of a force of nature. When the Battleship fleet is pulled into action, then you know its getting bad.

More importantly, you know that the Battleship fleet can focus on the big picture, while your team (whether its MASK, G.I. Joe or the Transformers) can focus on the details. Also, just to clarify, G.I. Joe would still need its own boats. It’s just they wouldn’t be focused on maintaining a full-on naval presence. Battleship would support all their nautical efforts.

If Hasbro wanted some Battleship representatives in future toy lines — no problem! Throw in a few characters or ships or Transformers with ties to the Battleship Fleet. Create a ship’s captain for each boat. Develop some cool extra characters — essentially the “away team” that the captain can join a la Star Trek. If you need characters, it can work.

Even better, Hasbro should develop a line (scaled to Micro Machines) of toy war boats for fun in the pool and elsewhere. But no matter what, just make sure they float! Make them even more playable by adding Nerf launching ability to them.

And on top of all of that, you can keep on selling the game with no changes whatsoever. Wins for every section of the company.

So, what do you say? Can Battleship slide into a supporting role for the integrated Hasbro Universe?