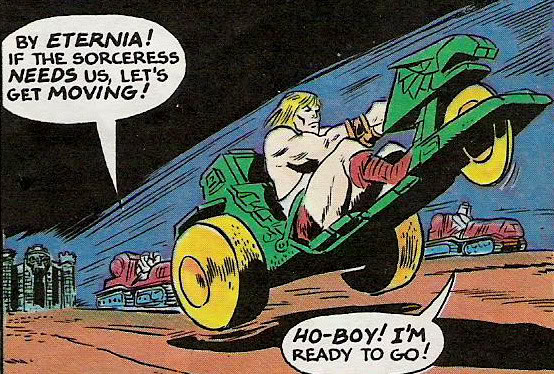 When the Masters of the Universe toyline came out in 1983 — a year after the end of “Thundarr the Barbarian,” a cartoon about a savage meting out justice in a post-apocalyptic world — it occurred to this then-young Comics On The Brain writer that Thundarr was the model for He-Man. They both had platinum-blond page-boy hair cuts. They both wore furry clothes and they both had muscles on their muscles.

Young CotB was wrong, of course. Both He-Man and Thundarr were created in the likeness of the legendary Conan character. Still there’s an interesting connection between He-Man and Thundarr — through the He-Man minicomics. The minicomics were little books which came with the every action figure you bought and were meant to help kids understand what to do with their toys. 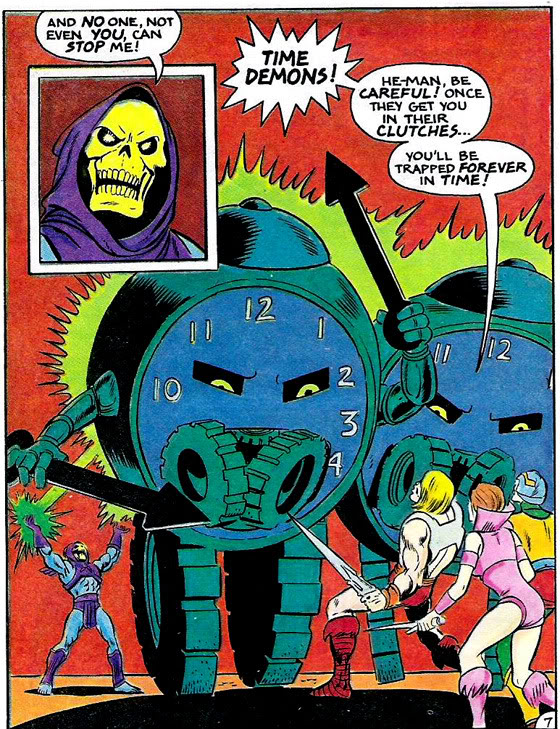 Over the years, Comics on the Brain has looked at a number of them and today we turn to “He-Man Vs. Skeletor in the Temple of Darkness,” probably the one the most straight-laced of all the minicomics we’ve read, which isn’t necessarily a bad thing.

This one arrived smack in the middle of the line and was packaged with the villains Triclops and Webstor. Oddly enough, neither of those guys appear in the comic at all.

In fact, this 1984 minicomic only features the “main cast” of the franchise: He-Man, Skeletor, Teela, Zoar/Sorceress, Ram Man and Man-At-Arms. CotB would bet that this was one of the first minicomics to be produced after the “He-Man and the Masters of the Universe” cartoon show proved to be a hit. The animated show debuted in 1983, and CotB’s guess is that by the time the “next round” of minicomics was in production, the good folks at Mattel said “Oh, crap! We need to reintroduce all these characters and make them seem more like the cartoon.”

With those sort of marching orders, books like “Temple of Darkness” were churned out.

Who is Larry Houston?

According to He-Man.org, the comic was drawn by Larry Houston, this Larry Houston, in fact. Houston produced a number of the minicomics and he was probably selected because of his already-proven skill in the animation field.

According to his Internet Movie Database profile, Houston had already worked on the Tarzan, Lone Ranger and Zorro cartoons. He also had some Spider-Man work under his belt. Most importantly, he was one of the craftsmen who produced the Thundarr The Barbarian cartoon.

Oddly, Houston has no credits on any He-Man animation project. But really does that matter? They had a guy who was getting steady work, proving his abilities and willing to take an odd job from a toy company. That’s all Mattel wanted.

So, in short, Larry Houston was a great choice to take on a slew of the minicomics. While the earlier books, with their Conan stylings, were simply amazing, Houston pulled the series back to a straight-as-an-arrow baseline. He probably even worked off the Filmation model sheets to keep his characters consistent.

The Experts’ Review of the MotU Mini

Here’s what He-Man.org said about the book:

Skeletor resurrects the Temple of Darkness in the Sands of Time and manages to kidnap the Sorceress in Zoar form. He-Man fights through giant beetles, sand storms, and time demons, eventually emerging victorious. The temple disappears for 300 years, and the Sands of Time desert becomes a forest.

The Story of the Temple of Darkness

Even as the minicomic plots go, this one is on the boring side. No cool new villains. No devilish use of magic. Just Skeletor, robot clock men and some giant bugs.

We can somewhat verify our assertion this was an “Oh Crap! Let’s get our ducks in a row” publication. The proof, once again, comes from He-Man.org, who blames the so-so writing on someone named Tina Harris. Who is Tina Harris? He-Man.org says she was a staff copy writer for Mattel. Comics on the Brain is betting that she got handed the assignment and told “Get this done quick!” So she watched a few episodes of the cartoon, didn’t bother to explore the somewhat twisted logic and crazy magicks of the earlier minicomics, and just plowed ahead with creating a story.

So then Houston, the hyper professional animator working as a penciller, was handed a dull as dishwater story and did his best. Not long after, copies of “The Temple of Darkness” were sealed up with Triclops and Webstor, and one of the most vanilla of all the He-Man minicomics hit the toy shelves.

It was no Conan. It really wasn’t even a Thundarr, but it’s exactly what Mattel wanted. 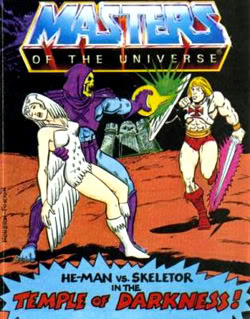