I’ve collected comics for a long time and have always wondered why superheroes aren’t slapped with all sorts of charges, such as disorderly conduct, destruction of private and public property, assault and battery and other crimes like that.

Is this because they aren’t the ones to initiate the all-too-frequent fights with the bad guys? Is it because they are somehow serving the public good with their destructive deeds and are therefore overlooked by eager prosecutors and over-zealous politicians?

Perhaps it’s the old secret identity that protects them, that is, no one knows who to charge. But when the villains disappear, leaving the hero holding the bag, what happens then?

I know Marvel Comics created the title “Damage Control” for this reason, but still, who foots the bill for people like Spider-Man?

It makes J.Jonah Jameson’s scathing editorials seem a little bit more mainstream when you think of it that way.

Also, after a bit of research on my own part, and surely not as thorough as a lawyer would do, I suspect a common crime that heroes like Batman, Daredevil and Spider-Man would be charged with is “menacing.” As I understand it (and this is research I did while I was still living in New York) menacing is the threatening of bodily harm to an individual. I imagine, for example, Batman frequently commits menacing, especially when he’s grilling any of his numerous stool-pigeons. I bet even Robin might be guilty of this crime. 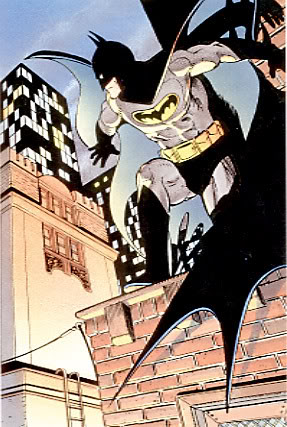 While I’m on a roll, wouldn’t testifying in court be difficult for any hero who maintains a secret identity? Don’t witnesses have to give their names and places of residence? Can’t a smart lawyer disqualify or dismiss (whatever the term is) a hero who can’t be properly identified. After all, I could dress up in a red suit and say I’m Daredevil (and believe me, that would be a real stretch).

I wonder if testifying would work the same way a government informant, such as an undercover DEA officer, testifies — with his or her identity kept secret. And if that’s the way superheroes testify wouldn’t the prosecutor, and at least the judge need to know the hero’s true identity.

Here and there, judges in comics often say something like “I think we can vouch for this man’s character” and that’s the most of the identification process.

The world of comics works differently than the real world and all these issues might be the reason why supervillains always get back on the streets, but even this leads to another question. How come villains always get their high-tech gear back? Why isn’t it destroyed in the same way guns are when they’re confiscated by police?

For example, villains like the Weather Wizard, the Beetle and others were all “gimmick” criminals whose powers where based on technology. Shouldn’t all that technology have been grinded down into metal shards?

Is this because they may have never been found guilty? Or perhaps since many of their weapons were actually scientific instruments, they weren’t officially recognized as weapons of mass destruction (or even minor destruction), and thereby had to be given back to the villains upon their release.